Brussels: Several airlines say they will avoid Belarusian airspace after Belarus scrambled a warplane to intercept a Ryanair jetliner and arrest a dissident journalist in an act denounced by Western powers as “state piracy”.

European Union leaders meeting on Monday evening were set to ban Belarussian airlines from their bloc’s airspace and call on EU-based carriers to avoid flying over the former Soviet republic, according to a draft statement seen by Reuters. 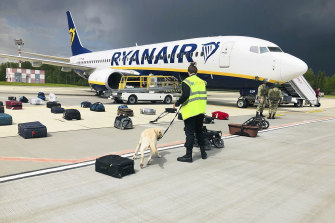 Belarusian security checks luggage on the grounded Ryanair flight in Minsk on Sunday.Credit:AP

The leaders of the 27 member states will also consider widening the list of Belarussian individuals they already sanction and call on the International Civil Aviation Organisation (ICAO) to urgently investigate Sunday’s incident, when Belarus forced a Ryanair plane to land.

“The reaction should be swift and be severe,” Belgian Prime Minister Alexander de Croo told journalists ahead of the EU summit.

Irish Foreign Minister Simon Coveney, using language that was echoed by a number of other EU countries, said: “This was effectively aviation piracy, state sponsored.”

A spokesman for UN Secretary-General Antonio Guterres said he was “deeply concerned” by the incident and called for a full investigation.

The three Baltic states said Belarusian airspace should be declared “unsafe” and – as regional tensions mounted – Belarus and Latvia said they were expelling each other’s ambassadors.

Some airlines and countries did not wait for guidance on how to respond to the flight from Greece to Lithuania being diverted as it flew through Belarusian air space.

Britain said it was issuing a notice to instruct British airlines to cease flights over Belarus and that it would suspend the air permit for Belarus’s national carrier Belavia with immediate effect.

Lithuania’s transport minister, Marius Skuodis, said Poland’s LOT and Hungarian airline Wizzair would also not use Belarusian airspace and said all flights to and from Lithuanian airports must from midnight GMT avoid Belarusian airspace. 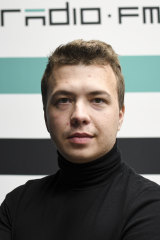 Raman Pratasevich was detained when the plane landed.Credit:Euroradio via AP

NEXTA, a news service where Protasevich worked before setting up his own widely followed blog, ran an interview with his mother, who said that as soon as she heard reports of a bomb scare on a flight, she knew it was a plot to capture him.

“I just want to say that my son is simply a hero, simply a hero,” Natalia Protasevich said, weeping. “I truly hope that the international community will wake up for him.”

Belarus says it acted in response to a bomb threat on the flight, which turned out to be a false alarm. It said on Monday its ground controllers had given guidance to the flight but had not ordered it to land. State media said the intervention was ordered personally by President Alexander Lukashenko.

Ryanair boss Michael O’Leary, who referred to the incident as a state-sponsored hijacking, said he believed security agents had been on the flight.

Russia, which has provided security, diplomatic and financial backing to Lukashenko, accused the West of hypocrisy.

Given the security ties between Minsk and Moscow, some European politicians openly speculated whether Russia may have played a role, which would escalate an incident involving a small European pariah state into one involving a superpower.

EU summit chairman Charles Michel said the incident was “an international scandal”, and the statement drafted for the meeting said new sanctions would be imposed as soon as possible.

EU countries could ban Belavia from European airports and was considering other unspecified measures regarding ground transport links, an EU official said.

The Montreal-based ICAO has no regulatory power, and the EU has no authority over flights taking off and landing in Belarus or flying over its airspace, apart from direct flights that originate or land in Europe.

The EU and the United States imposed several rounds of financial sanctions against Minsk last year, which had no effect on the behaviour of Lukashenko, who withstood mass demonstrations against his rule after a disputed election.

Lukashenko denies election fraud. Since the disputed vote, authorities rounded up thousands of his opponents, with all major opposition figures now in jail or exile.

Skirting Belarus would slow flights down and cost airlines money, and apart from the few that announced action it was not clear whether others would do so unless required.

What in the World

A note direct from our foreign correspondents about what’s making headlines around the world. Sign up for our weekly newsletter here.