An American mother has divided the internet after she spent the whole day trying to master a roast dinner.

Megan Torres-York, 36, from New Jersey, US, joined a Facebook group for family dinner hacks and kept seeing posts from proud parents of their Sunday roasts.

In an effort to get involved in British culture she spent an entire day perfecting the dish, including roast chicken, roast potatoes, parsnips, gravy, carrots and cauliflower and broccoli cheese.

Her husband, Matthew, 37, and 12-year-old daughter, Charlie, loved the meal and requested it for the following week.

But when she posted the roast on Facebook, British fans weren’t all impressed and informed her that cheese and broccoli should never go together. 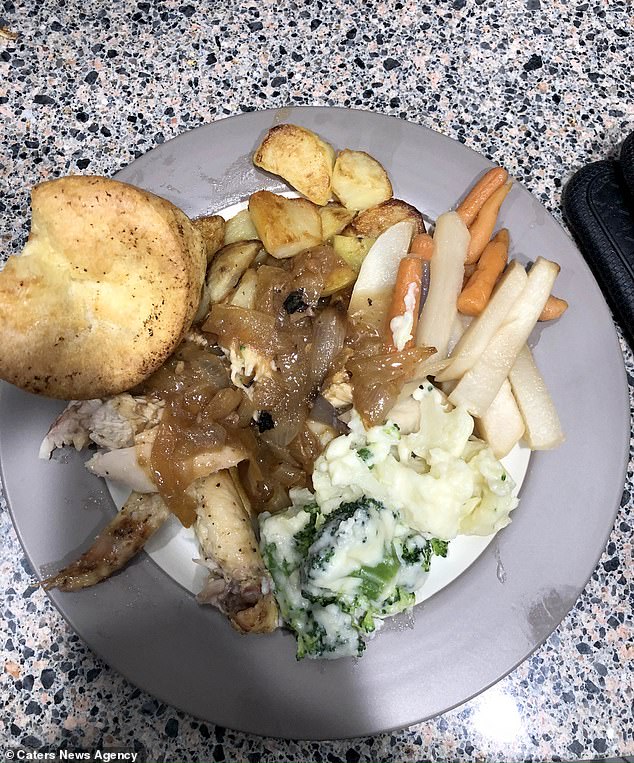 Megan Torres-York, 36, from New Jersey, US, spent a day creating her roast dinner, but it received mixed results on the internet

Megan, a data analyst, said: ‘I kept seeing these roast dinners on the group and couldn’t believe how giant the meals were.

‘Us Americans are supposed to be known for being large, but I had never seen a meal bigger than the roast dinner.

‘I made a schedule and wrote the recipes out because the whole process seemed to need a full day’s work to get it ready.

‘We don’t really eat cauliflower cheese here, but broccoli and cheese are a thing so I went with that, I was of course apologetic to the commenters for adding that to the roast.

‘Don’t get me wrong, it was all good spirited comments, it wasn’t mean, but I quickly learnt what not to do. 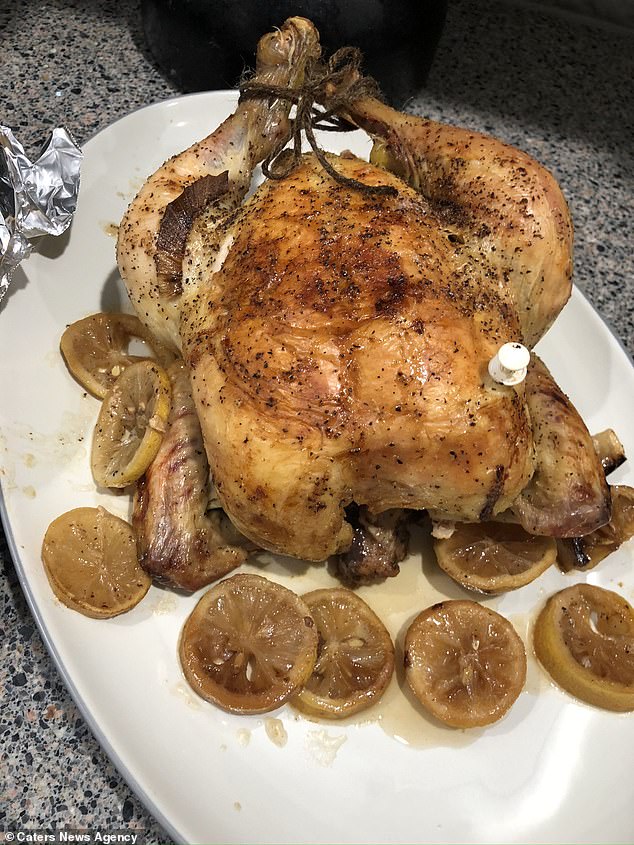 Megan decided to have roast chicken in her roast dinner, a popular choice for Brits 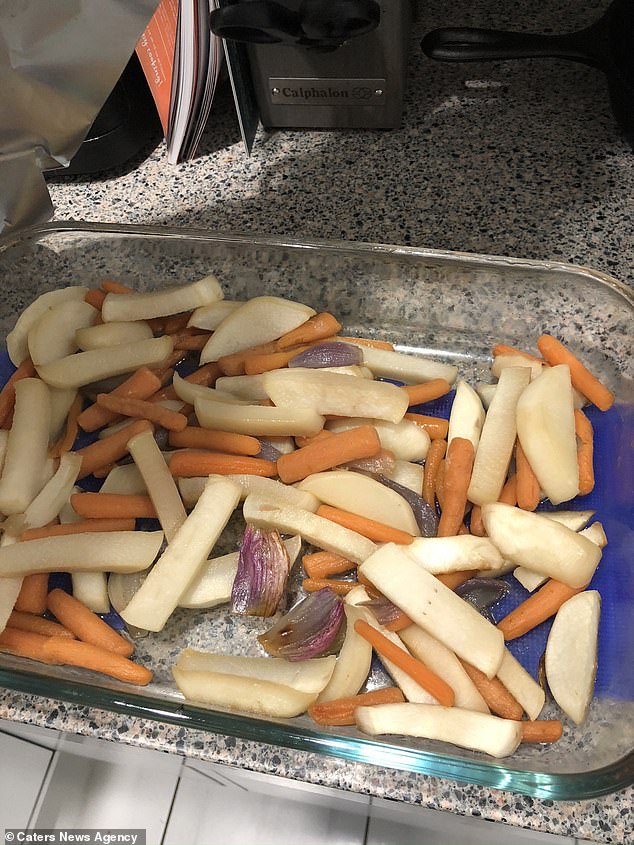 Cooking the feast for her family took Megan all day and she questioned how Britons have time to do this every week on a Sunday. Pictured: A tray of carrots, parsnips and onions 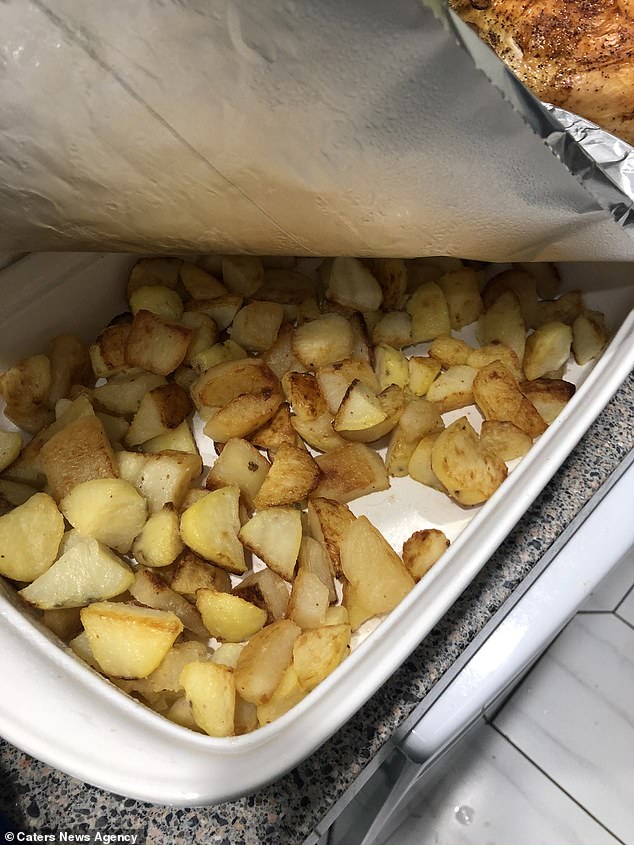 The humble roast spud, a key part of any roast. But Megan was miffed to discover that many Brits also want a second carb on their roast, in the form of mashed potato

‘What I don’t understand is how on earth brits have the time to make this every week, it’s the type of meal we have for public holidays like thanksgiving, not just because it’s the weekend.

‘I had one person comment saying if I was ever in the UK to swing by for a proper roast.

‘It went down really well with my family and they really enjoyed it but if they think I’m making that every week they’ve got another think coming.

‘The biggest lesson I learnt was to never skip mashed potatoes because everyone was shocked that I didn’t have that included, but it’s an awful lot of carbs if you have roast potato as well.

Megan first decided to make the meal after seeing loads of English families posting pictures of their roasts all over a Facebook page she was part of. 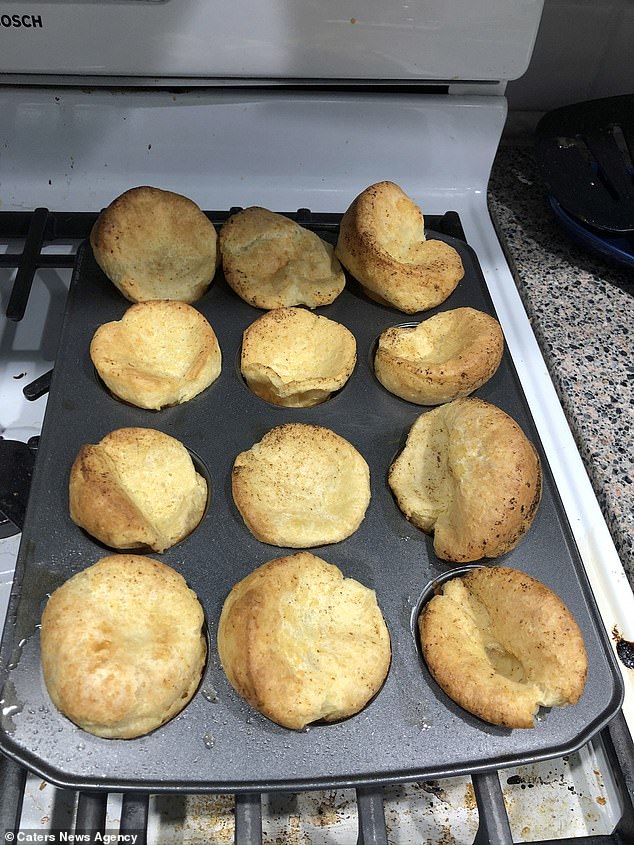 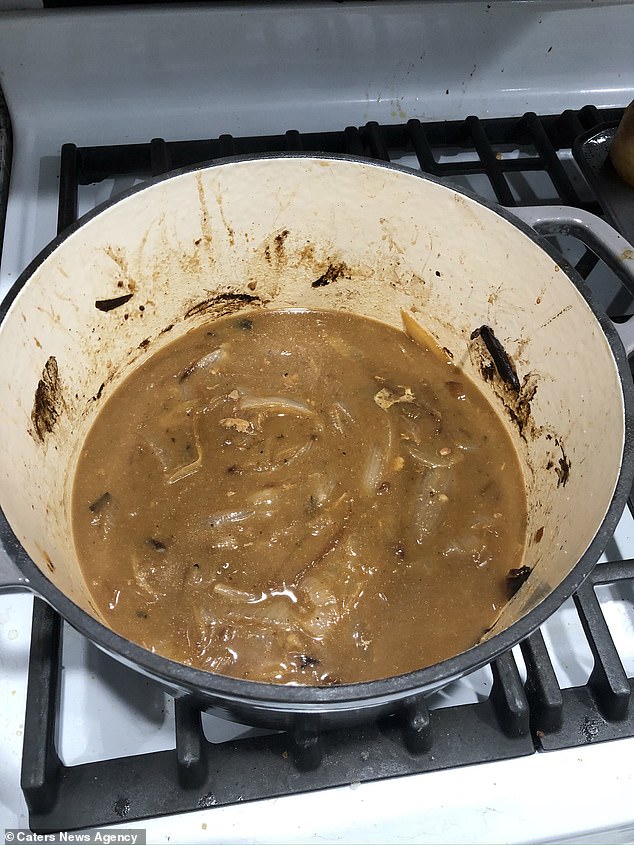 As any Brit will know the key to a decent roast is a rich, simmering gravy to cover your meat, veg and potato 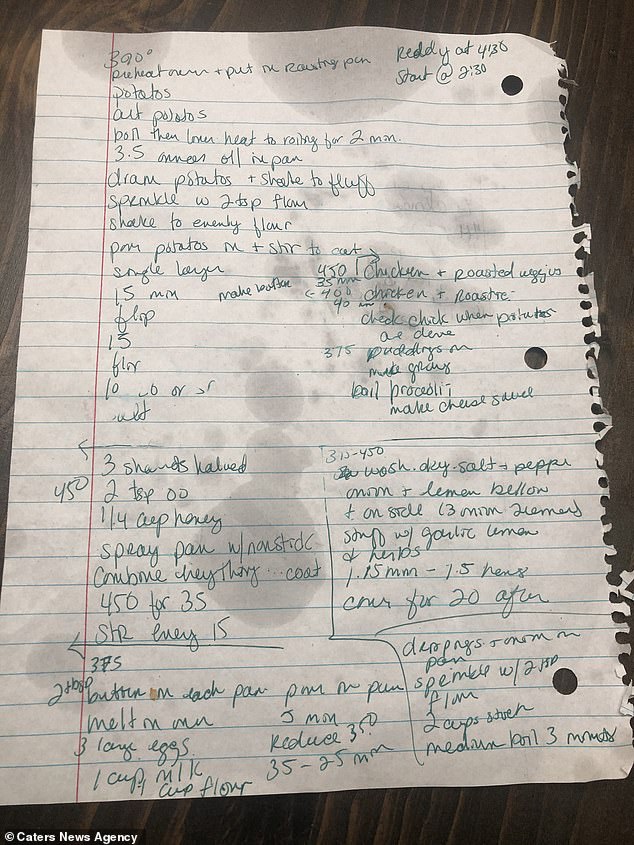 Megan meticulously prepared her meal, but was criticised by some for combining broccoli with cheese

She posted in the group asking for tips on how to make the perfect roast and mixed those instruction with recipes she found online.

She said: ‘I knew it wouldn’t be perfect but I figured it can’t be too hard so woke up and cracked on with it.

‘The one thing I couldn’t get was swede, I looked everywhere but for some reason it’s hard to get in the US.’

After posting on the group where she originally saw the meal, she was inundated with comments about how to get it better next time.

Megan, said: ‘The comments kept flowing and not everyone was very impressed, but everyone seemed appreciated the effort I had gone too and gave me tips on how to make a better one next time.

‘I will never forget about mashed potatoes ever again, I never knew Brits were so passionate about their mash.

‘I’m going to give it another go in a few weeks, but next time I think I’ll try roast beef.’