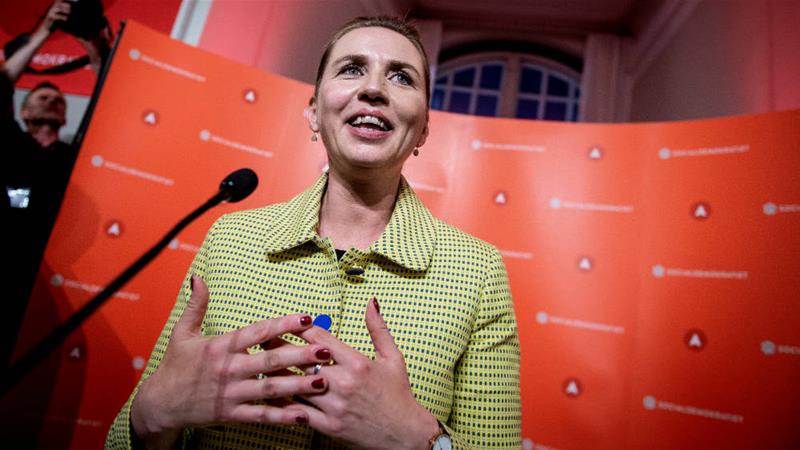 Copenhagen, Denmark – The leader of the Social Democrats, Mette Frederiksen, is set to become the youngest prime minister in Denmark’s history following an election victory for left-wing parties.

“Dear young people, you made this election the first climate election in Denmark’s history,” 41-year-old Frederiksen said in her victory speech in front of a cheering crowd on Wednesday night.

“This election was also about welfare and the answer from Danes has been completely clear-cut: From tonight, we will put welfare first,” she said.

Right-wing parties suffered major losses with the anti-immigration Danish People’s Party being handed the largest defeat, losing more than half of their seats in Parliament.

The extremist anti-Islam party, Hard Line, did not reach the two percent threshold needed to secure representation in Parliament.

However, the defeat of the right-wing does not necessarily show that Danes have moved left on all issues.

“The centre-right government with support from the Danish People’s Party has pushed Denmark’s immigration policies to the edge of international conventions, and even the Social Democrats have adopted their stance on immigration,” he told Al Jazeera.

“So, there’s really nothing left to talk about on this issue for DPP. They are losing their raison d’etre.”

According to a recent poll, climate and welfare were the main issues for Danish voters during this election, with immigration coming in third place.

“Climate has really been the major issue. Voters across the spectrum are realising that climate change is a serious problem and we need politicians to take action. And the only ones who have rallied on a climate agenda are left-wing parties in the red bloc,” Stilling said.

But this election has been an historic event in Denmark for other reasons.

Immigrants in the Scandinavian country traditionally have a low voter turnout, with only 66 percent of immigrants voting in the 2015 elections, compared with an overall turnout of around 85 percent.

However, some analysts believe this election marked a shift.

“This election will mark a historic turning point for minorities. For the first time, many people with minority backgrounds see it as an obligation to vote and they demand to be heard,” Danish author and sociologist Aydin Soei told Al Jazeera.

“Politicians are realising they have to take minorities seriously and from now on they will constitute a larger factor of power in Denmark,” said Soei, referring to local ballot counts already showing a large increase in turnout in immigrant-majority neighbourhoods.

While there are several reasons for this mobilisation in ethnic minority communities, the rise of two new anti-Muslim far-right parties has been perceived as a contributing factor.

“Anti-Muslim extremism has become so severe, even from mainstream politicians, and with parties like Hard Line openly calling for deportations and ethnic cleansing of Muslims, many have realised that there is no longer any excuse to sit on the fence,” said Amal Hassani, chairwoman of CEDAR, the Centre for Danish-Muslim Relations, an organisation that works to fight Islamophobia in Denmark.

Although the election result is a clear “red bloc” victory, it will not be easy for Frederiksen to form a government. She will have to rely on support from other left-wing parties including the Social-Liberal Party and the Socialist People’s Party – which has campaigned for a softening of rhetoric and policies targeting immigrants, refugees and Muslims.

“It will be very difficult to reach a settlement on these issues,” said Oliver Stilling. “It could take weeks before we have a new Danish government.”

LAUNDRY entrepreneur, Sam Whigham, has shared a host of tricks to take care of clothes sustainably – ensuring you get

LAUNDRY entrepreneur, Sam Whigham, has shared a host of tricks to take care of clothes sustainably – ensuring you get