Armenia and Azerbaijan are moving ‘towards a truce’ to end the current fighting over Nagorno-Karabakh, with a deal expected on Friday or Saturday, the French presidency said.

The news came as senior diplomats from the warring parties met in Moscow for the first talks on ending the most recent outbreak of fighting, while clashes on the ground over the disputed region appeared to show no signs of abating.

Russia’s foreign ministry confirmed on Friday that diplomats from the two countries are joining the talks in the Russian capital following a late-night appeal on Thursday from Russian President Vladimir Putin. 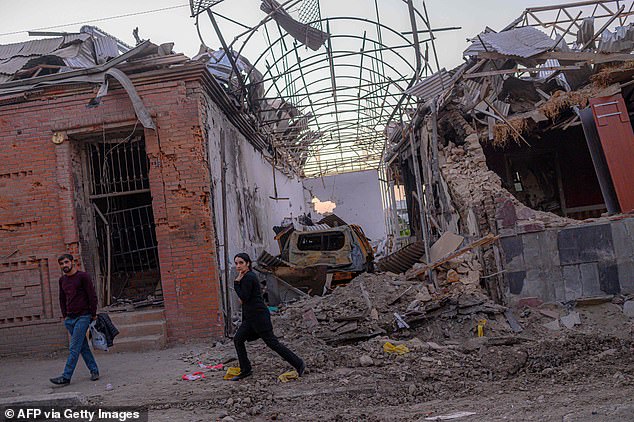 Nagorno Karabakh is a disputed region which lies within Azerbaijan but is populated and governed by ethnic Armenians. Fighting broke out once more over the area on September 27 and shelling has spread into other nearby areas including Gandja above 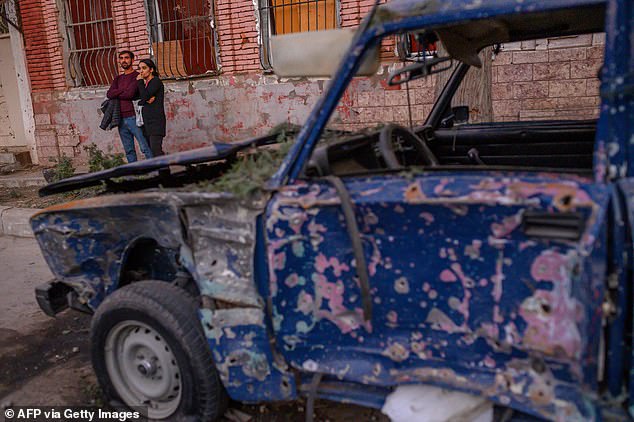 Some 400 people, including civilians, have been killed in the most recent outbreak of fighting and thousands more displaced from their homes

‘Baku and Yerevan have confirmed their participation,’ foreign ministry spokeswoman Maria Zakharova told AFP news agency. The meeting will take place on the sidelines of a meeting of Eurasian Economic Union in Moscow.

Russia is a key mediator in the long-running dispute, along with France and the United States.

Both sides reported further civilian deaths after Putin announced the meeting in Moscow and appealed for a ceasefire on humanitarian grounds.

Nagorno Karabakh is located in Azerbaijan but is populated and governed by ethnic Armenians. 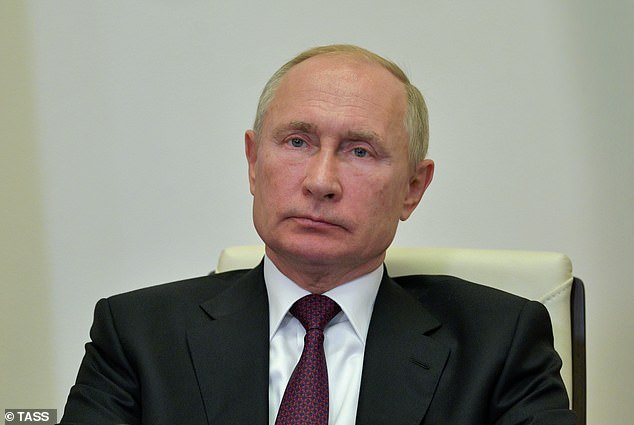 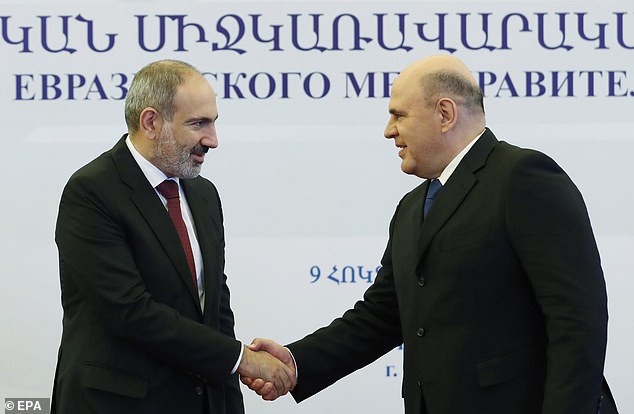 Both sides have previously dismissed mounting calls to end the fighting that has claimed some 400 lives including dozens of civilians, and Azerbaijan has said it is determined to capture the province.

The Kremlin said late on Thursday that, following a series of calls with Armenian Prime Minister Nikol Pashinyan and Azerbaijan’s President Ilham Aliyev, Putin was calling for an end to hostilities in Karabakh ‘in order to exchange dead bodies and prisoners’.

Diplomatic efforts to find a lasting solution to the decades-old stalemate have faltered since a precarious ceasefire was agreed in 1994. 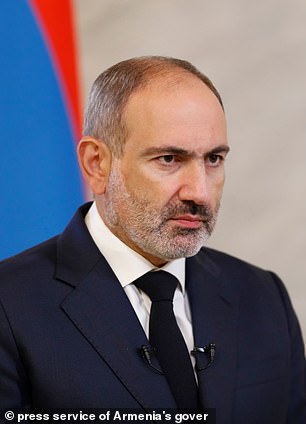 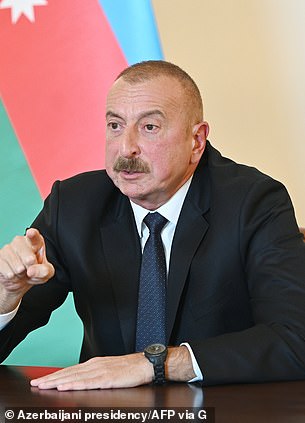 Putin’s announcement of talks in Moscow came shortly after international mediators from France, Russia and the United States launched their first efforts to resolve the fighting from Geneva.

The countries lead the ‘Minsk Group’ that has sought a solution to the Karabakh conflict since the 1990s but has failed to stop sporadic outbreaks of fighting, including the most deadly clashes in decades this month.

But the negotiations in Geneva went ahead without Armenia, which refused to participate if the fighting was ongoing, and there were no public statements following the closed-door talks. 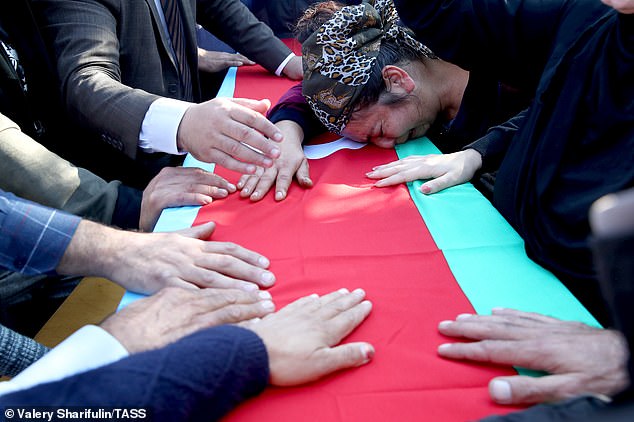 People mourn an Azeri serviceman who died in the conflict with Armenia over Nagorno Karabakh. Azerbaijan has not admitted to any fatalities among its troops while Armenia has acknowledged 350 deaths of servicepeople 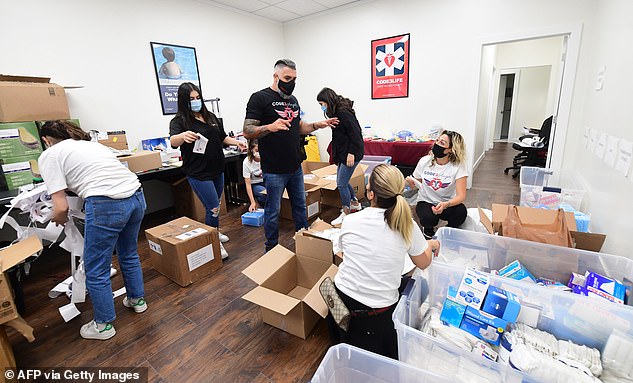 The conflict in the Southern Caucuses has attracted international attention, with Armenia receiving support from its far-flung diaspora. Above, volunteers from Southern California help pack boxes with medical supplies bound for Armenia 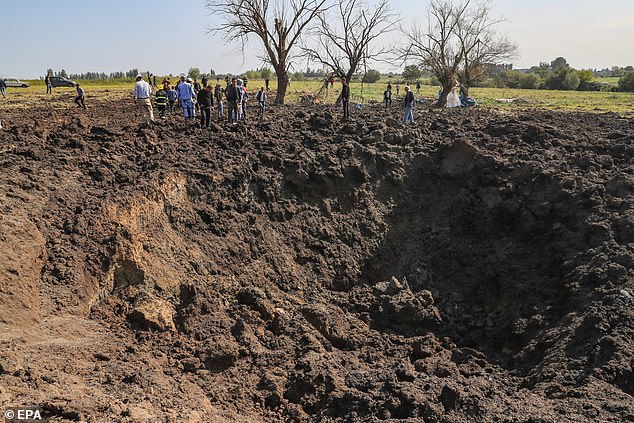 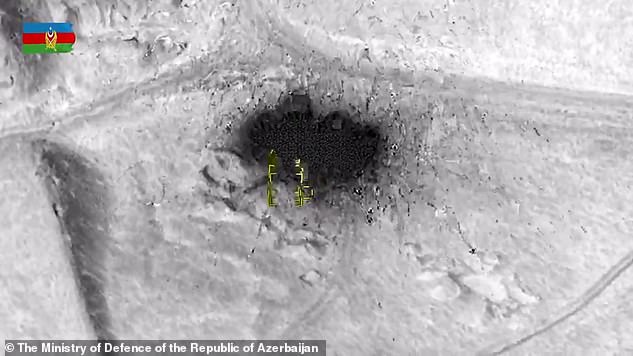 Since the fighting restarted on September 27,  both sides have accused the other of shelling areas populated by civilians and thousands of people have been displaced by the clashes.

The administrative centre of the disputed region, Stepanakert, is dotted with wide craters and unexploded ordinance following days of intermittent shelling but the city was calm Friday morning, an AFP journalist said.

Armenia’s rights ombudsman Artak Beglaryan told AFP earlier this week that the renewed fighting has displaced around half of Karabakh’s 140,000 residents and forced some 90 percent of its women and children from their homes.

Dozens of civilians have been confirmed killed and the Armenian side has acknowledged 350 military deaths, while Azerbaijan has not admitted to any fatalities among its troops.

Soldier survey the damage at the iconic Ghazanchetsots (Holy Saviour) Cathedral. Armenia accuses Azerbaijan of shelling the site, leaving a gaping whole in its roof and injuring several journalists 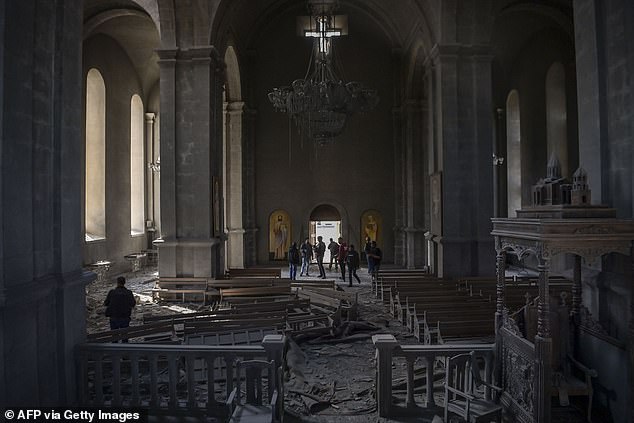 The cathedral lies in the historic city of Shusha, some 15 kilometres from Nagorno Karabakh’s disputed capital. It was hit by a bomb on Thursday

Diplomatic efforts have been further complicated by concerns over Turkey’s increasing hawkish role in the conflict.

Turkey’s strong backing for Azerbaijan has sown fears in the West and beyond that the conflict could spiral into a full-blown war embroiling Ankara with Moscow, which has a military treaty with Armenia.

Putin, French President Emmanuel Macron and Iranian President Hassan Rouhani are among the world leaders who have denounced the reported deployment of pro-Turkish fighters from Syria and Libya to Karabakh.

On Tuesday, Armenia’s Pashinyan said he would not take part in peace talks involving Turkey, which has had extremely poor relations with Armenia for more than a century.

Why Armenia and Azerbaijan are fighting

WHAT AND WHERE IS NAGORNO-KARABAKH?

Karabakh is a region within Azerbaijan which has been under the control of ethnic Armenian forces since a full-scale separatist war ended in 1994, after killing about 30,000 people and displacing an estimated one million.

Nagorno-Karabakh is about 1,700 square miles in size, but Armenian forces also occupy other nearby territory.

HOW DID THE CONFLICT START?

Long-simmering tensions between Christian Armenians and mostly Muslim Azerbaijanis began boiling over as the Soviet Union frayed in its final years. Once the USSR collapsed in 1991 and the republics became independent nations, war broke out.

A 1994 cease-fire left Armenian and Azerbaijani forces facing each other across a demilitarised zone, where clashes were frequently reported.

International mediation efforts have brought little visible progress. The conflict has been an economic blow to the Caucasus region because it has hampered trade and prompted Turkey to close its border with Armenia.

Fighting periodically breaks out around Nagorno-Karabakh’s borders, often deadly, notably in 2016 and this July.

Since new fighting erupted on September 27, dozens have been killed and wounded in apparent shelling by both sides. Each country blamed the other.

In addition to causing local casualties and damage, the conflict in the small, hard-to-reach region is also of concern to major regional players.

Russia is Armenia´s main economic partner and has a military base there, while Turkey has offered support to Azerbaijanis, fellow Muslims and ethnic brethren to Turks. Iran neighbors both Armenia and Azerbaijan and is calling for calm.

Meanwhile, the United States, France and Russia are meant to be guarantors of the long-stalled peace process, under the auspices of the Vienna-based Organization for Security and Cooperation in Europe.