Home » World News » As it happened: Germany warns against AstraZeneca vaccine use in over-65s as Josh Frydenberg rules out JobKeeper extension

That’s all for today

That’s all for today, thank you for joining us on another big day of news.

Here’s a recap of everything that happened today:

The blog will be back tomorrow morning, I hope you can join us again then!

Queensland’s plea for federal funding to help its struggling tourism industry has erupted into another major State of Origin clash with NSW.

Opposing stances on state borders closures are at the heart of the scuffle, with several politicians taking swings at each other about the true cause of economic hardship for Queensland tourism operators. 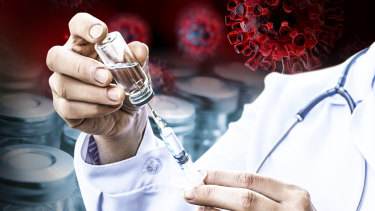 Coronavirus vaccines are being rolled out around the world.Credit:Istock

In the UK, Novavax reported its trial results and cited 89 per cent efficacy, including against the new UK strain. Again, this is one of the vaccines Australia could use, with a contract in place allowing us to get hold of 51 million doses.

After more than 28,000 cases and 909 deaths, plans are under way for the Australian adult population to be vaccinated against COVID-19 at hospitals, specialist hubs, GP clinics and chemists by the end of October.

In an undertaking described by federal Health Department secretary Brendan Murphy as “the most complex logistical exercise that perhaps we’ve done in public health in this country”, the federal government is leading state and territory health departments in a mammoth inoculation operation.

What does Australia’s vaccination timeline look like? And where will you get yours? We’ve got this Explainer by Mary Ward covering everything we know so far.

Treasurer Josh Frydenberg has ruled out extending JobKeeper beyond March, despite a plea from Queensland Premier Annastacia Palaszczuk to extend the payments to people in the tourism industry.

“Money got out the door very quickly, and help provided an economic lifeline to the Australian economy at a time that it was hit by this once-in-a-century pandemic and the greatest economic shocks since the Great Depression.

“That JobKeeper is tapering off was always temporary in a targeted program. And it will end, as scheduled, in March.”

Mr Frydenberg said the Morrison government had delivered $27.9 billion in support to people affected by the pandemic, compared to $8.8 billion delivered by the Palaszczuk government in Queensland.

“So, our support to the people of Queensland has been there for everyone to see.

“What I do know is that our support for the economy is continuing and will continue.“

Federal Health Minister Greg Hunt was also asked how a national booking system will work, once the rollout of coronavirus vaccines begins.

He said the government had been inundated with GPs putting up their hands to administer the vaccines.

“Our goal for the public is to have a very simple access approach. So, as you can phone your GP, you can phone the state clinic, or you can come through a single front door,” Mr Hunt said.

“We are working quietly behind the scenes with the states to make sure that we’ve got that simple, single front door for people, whether it is online, whether it’s through telephone, depending on their circumstances. They will also be able to go direct to their GPs.

“I do want to thank our General Practice community. The numbers have been faster and greater than we’d ever anticipated, and that means that more Australians will have better access [to the vaccines] all around the country.”

Hunt: Variants to be a matter for regulator

Federal Health Minister Greg Hunt has refused to explicitly confirm if Australia is in talks with pharmaceutical companies to secure supplies of newer vaccines to combat variants of coronavirus such as the two highly infectious strains that have emerged in the UK and South Africa.

But he insists Australia will not be left behind.

“Look, I would be cautious on making judgements on existing vaccines against the variants at this point in time. That will remain a matter for the vaccine advisory committee and the medical regulator,” he said.

“At this point in time, the advice remains that the vaccines that we have are the right vaccines for the circumstance. But as that continues to evolve, we are in a position to be able to adapt.”

On the prospect that the Therapeutic Goods Administration finds the AztraZeneca vaccine – the centrepiece of Australia’s vaccine strategy – is not suitable for people over the age of 65, Mr Hunt said: “We are already prepared for all possible options.”

“We have a total vaccine supply of approximately 140 million doses for a population of 25.5 million, requiring two doses per person, so we have strong levels of vaccine, but we also have a range of options for roll out, which have already been prepared for all circumstances.”

He added that the government was expecting the Novavax vaccine to be ready in the second half of the year.

“It could be either a primary vaccine, if that was required (and we are always in the hands of medicine and evidence), or secondly, it could be a subsequent vaccine, if like the flu, further use of vaccination is required,” Mr Hunt said.

“All of our medical advisors have been absolutely clear throughout that … the whole world does not yet know the longevity of immunity – that will be determined in what will be the greatest global vaccination program the world has yet seen.”

Hunt: More repatriation flights will be arranged if needed

Stranded Australians were dealt a fresh blow overnight after an abrupt decision by Britain to close its border to the United Arab Emirates caused Emirates to axe all flights to the key transit hub of Dubai.

As our Europe correspondent Bevan Shields reported this morning, the UK announced on Thursday it would ban all incoming passenger flights from the UAE amid fears over new coronavirus variants circulating in the country.

The UAE ban means no Emirates planes will be available to pick up stranded Australians in London and take them to Dubai and then Sydney, Melbourne or Brisbane. Emirates said all flights out of the UK would end from January 29.

“What we have shown is that if more flights are needed, more will be provided,” Mr Hunt said.

“We added an extra 20 specific charters, which Simon Birmingham announced a few weeks ago. They were done to make sure that more Australians will come home, so we will have to examine the impact of those particular changes, which we understand and which we respect, and the guidance to Australians is very, very clear.

“The Prime Minister has been clear, if more flights are needed, more will be provided.“

Payne to work with WHO to guarantee vaccine supply

“We understand that the whole world has to deal with supply shortages and therefore our volumes have been appropriately set out this week. But the Foreign Minister has confirmed today that Australia will be making representations through the World Health Organisation and through Europe, with regards to ensuring vaccine supplies and certainty for Australia.”

Mr Hunt says he had complete faith in the Therapeutic Goods Administration, as it assesses the AstraZeneca vaccine.

As our Europe correspondent Bevan Shields reported this morning, Germany has warned against giving the Oxford-AstraZeneca vaccine to people aged over 65 in a surprise recommendation that will stoke speculation over whether Australia’s drug regulator might reach a similar conclusion.

“I understand that yesterday, Professor John Skerritt, the head of the TGA, spoke to the Senate committee [and] … he noted that there was no evidence relating to any risk with regards to effectiveness or other elements, with regards to over 65 is being negative,” Mr Hunt said.

“But they will take the advice of our vaccines advisory group, led by Professor [Allen] Cheng and in addition to that, they [will] take into account all of the information … with regard to the safety and effectiveness of that particular vaccine for over 65s.

“I understand that Professor Adam Field, the member of the joint committee on vaccination and immunisation in the United Kingdom said they have no concerns about the safety of the vaccine in any age group, and they will continue to do that.

“So, countries will take different approaches. Our approach will be led by what we believe will be the best medical regulator in the world, the Therapeutic Goods Administration.“

Read more: Australia will have 2 million locally-produced COVID vaccines by the end of March

“Our timeframes have been reaffirmed by both Pfizer and AstraZeneca during the course of the week and in addition, we have seen positive test results for a third major vaccine supplier, Novavax,” Mr Hunt said.

“While Australia has based its vaccine strategy on the Pfizer and AstraZeneca vaccinations, we also have other vaccine agreements: one for 51 million doses of the Novavax vaccine, being made in several locations across Europe.

“Phase three trials for the Novavax vaccine are ongoing, but the latest information coming out of the UK is that it’s 89 per cent effective – that’s quite a high efficacy rate and pretty similar to the results in the Pfizer vaccine trials.

“We [expect] that we will be exceeding [vaccine] supply with the commencement in late February, with completion on track for the end of October,” Mr Hunt said, citing Australia’s deals with Pfizer, AstraZeneca and Novavax.

In total, Australia will receive 140 million doses of various vaccines.