Attacks come a day after similar strikes killed at least 11 people in different parts of Idlib and Hama provinces. 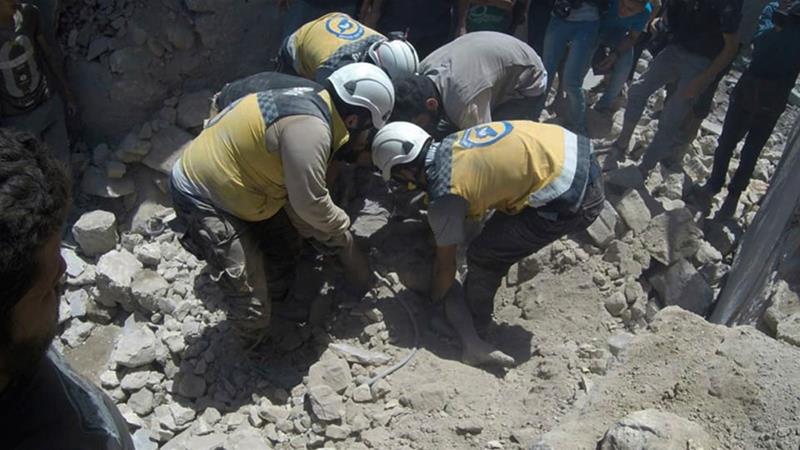 Air attacks by Syrian and Russian military aircraft have killed at least eight people in the northern region of Idlib in the last two days, while 11 people were killed in different areas of Idlib province on Saturday, according to the White Helmets rescue group.

Three people, including a woman and a child, were killed in air raids in the town of Kafarya in eastern Idlib, the organisation said.

Eleven people were injured, including a White Helmets rescuer, the organisation said in a tweet.

Earlier in the day, air attacks in the Khan Sheikhoun town killed at least six people, including four children and two women, when their house was targeted, the White Helmets reported.

Saturday’s attacks come a day after similar raids killed at least 11 people in different parts of Idlib and Hama provinces.

On Friday, six people were killed in Ariya, three in Maart al-Numan, one in Idlib and one in Kafr Zita, Hama.

At least 45 people were injured in those attacks, the group said.

Last week, the Syrian Network for Human Rights (SNHR), which monitors casualties and briefs various United Nations agencies, had said that 130 children were among the 544 civilians killed in the hundreds of attacks carried out by Russian jets and the Syrian army.

Another 2,117 people were wounded since the Russian-led assault on the last rebel-held bastion in northwestern Syria began.

Russian fighter jets joined the Syrian forces on April 26 in the offensive against rebel-held Idlib and adjoining northern Hama provinces in the biggest escalation in the war between Syrian President Bashar al-Assad’s forces and rebel fighters since last summer.

Last month, the Human Rights Watch had said the Russian-Syrian joint military operation used cluster munitions and incendiary weapons in the attacks along with large air-dropped explosive weapons, based on reports by first responders and witnesses.

The Syrian army and its ally Russia denied the allegations. Moscow said its forces and the Syrian army were fending off attacks by al-Qaeda fighters who, they said, hit populated, government-held areas. It also accuses rebels of breaching a ceasefire deal agreed last year between Turkey and Russia.

Last month, UN aid chief Mark Lowcock asked Russia to explain how it used data on the location of Syrian hospitals and clinics following a string of attacks on health facilities.

The under-secretary-general for humanitarian affairs told the Security Council he was “not sure” hospitals that share coordinates of their location under a UN de-confliction system will be protected.

More than 23 hospitals have been hit by attacks since the offensive on Idlib began in late April, according to the UN.

The heads of 11 major global humanitarian organisations had warned last month that Idlib – home to three million civilians, including one million children – is on the brink of a disaster.

“Too many have died already” and “even wars have laws” they declared, in the face of multiple attacks by government forces and their allies on hospitals, schools and markets”, the UN-endorsed statement said.