A wide-eyed baby elephant was caught on camera spending his day playing with bubbles in his enclosure at the Fort Worth Zoo.

The Fort Worth Zoo released the heartwarming footage on Friday, showing almost-10-month-old baby elephant Brazos playing with the foam for the first time.

Brazos, who was born on October 21, was the fourth Asian elephant to be born at the zoo since 1986.

He was recorded opening his mouth and waving his trunk at the wave of bubbles coming at him before chasing them moments later.

At one point, he was even seen with his mouth wide open in front of a bubble machine, trying to swallow bubbles coming in his direction. 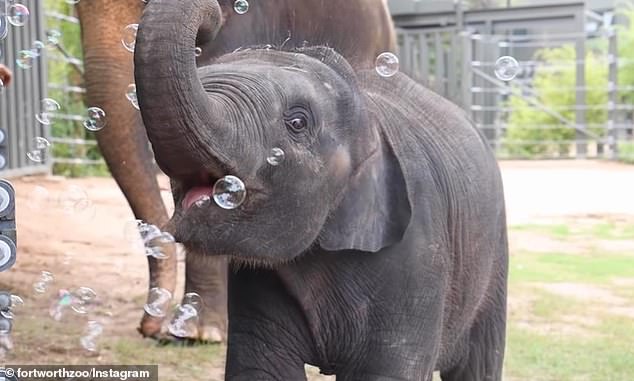 Brazos, a baby elephant at the Fort Worth Zoo in Fort Worth, Texas, was caught enjoying himself with a bubble machine on Friday 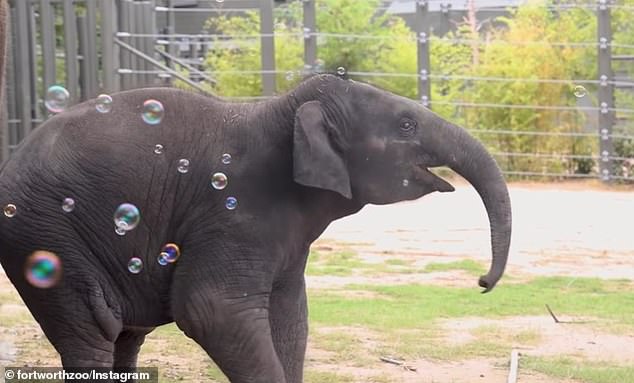 Since first setting up its elephant breeding program in 1986, the Fort Worth Zoo has been at the forefront of conserving the species. The zoo itself, which has a slogan saying it is the ‘world’s greatest’, has been previously awarded the accolade of being USA Today’s No.1 Zoo in America in 2020.

‘Conservation is a series of management plans, opportunities and strategies that are put into place that alleviate pressures on species that are vulnerable,’ Associate Professor of Environmental Science at Texas Christian University Victoria Bennett told TCU 360.

‘Conservation is an important part of zoos, as they provide a source of genetic diversity and preserve biodiversity.’

In April, the Zoo open a new enclosure for its eight elephants, consisting of four males and four females. It’s called Elephant Springs and it includes several green areas and different surfaces to roam on, as well as a brand new waterhole to drink and swim out of. 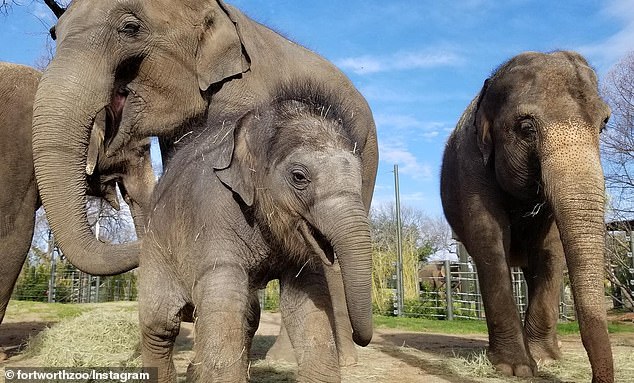 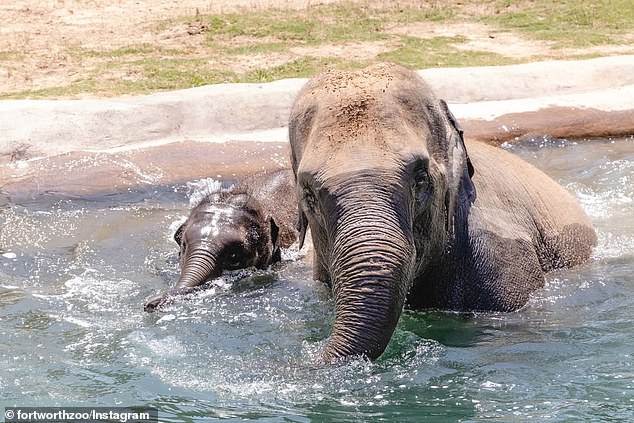 In April, the zoo opened a new $32million enclosure so that the elephants have more space to roam in

The project was funded $32million as the Zoo perseveres with its commitment to being a leader in elephant conservation.

First listed as an endangered species in 1976 by the U.S. Fish & Wildlife Service, Asian elephant populations have declined by roughly 50 percent over the last 75 years, National Geographic reports.

It is thought that there are only between 20,000 to 40,000 Asian elephants roaming freely in the world.

The greatest threat to the species are habitat loss, group division and degradation.

Hunters particularly kill male Asian elephants for their ivory tusks, as females do not have any.