Dhaka, Bangladesh – As protests flare across Bangladesh over a series of rapes and sexual assaults, its government says it is considering the death penalty for the offenders.

Law Minister Anisul Huq told Al Jazeera that his ministry is set to place a proposal before the cabinet on Monday to make urgent amendments to the laws dealing with sexual assault.

“We are thinking of capital punishment instead of life imprisonment… This measure will be taken as per the direction of our Prime Minister Sheikh Hasina,” said Huq.

In the past week, Bangladesh, a Muslim-majority country of 170 million people, has seen unprecedented protests and rallies across the capital Dhaka and other cities as angry demonstrators demand justice and stricter punishments in rape cases.

Placards bearing messages such as “Hang the rapists” and “No mercy to rapists” were seen as tens of thousands of students and women marched this week.

One of those students, Saima Ajmeri, braved the scorching sun, intermittent rain, and the fear of COVID-19 infection as she hit the streets for five days straight.

“I was always shy and stayed away from protest rallies and processions as I am an introvert. But now I feel I can no longer stay silent. These rapes just can’t go on and the rapists can’t go scot-free. Something has to change,” the 21-year-old university student told Al Jazeera. 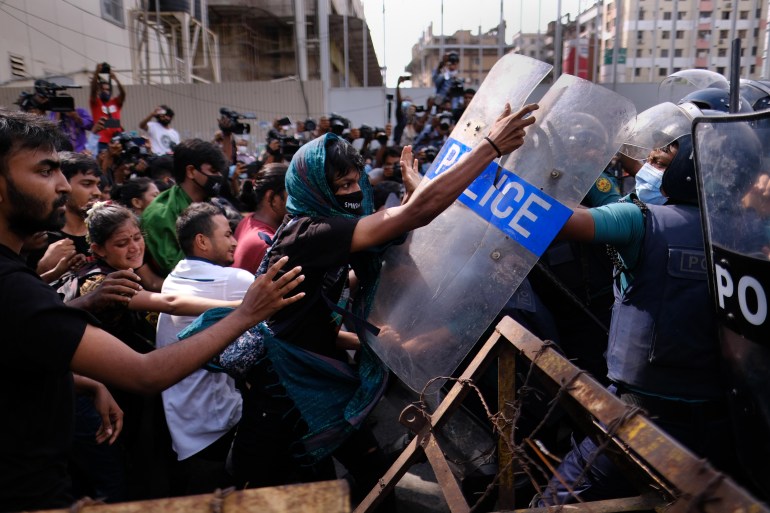 This is the first time Bangladesh has witnessed large-scale protests against sexual violence over a prolonged period [Mahmud Hossain Opu/Al Jazeera]Protests led mainly by women erupted after a video emerged this month showing several men stripping and attacking a woman in the southern district of Noakhali.

In her statement, the woman said she was first raped by one of the accused at gunpoint last year. He assaulted her at gunpoint several times over the year, threatening her with gang rape if she resisted.

She was gang-raped by the man and a number of his associates on September 2, and a video of the assault was made to blackmail her for money and to agree to sexual encounters with the group. She refused, and the men released the video on social media.

Eight people have been arrested in connection with the case.

Days before the Noakhali video went viral, anger had already been brewing after several members of the Bangladesh Chhatra League – the student wing of the governing party – were arrested and charged with gang-raping a woman in the northern town of Sylhet last month.

The latest round of protests first began on social media as hundreds of users on Facebook and Twitter changed their profile photos to an empty black space, denoting anger.

Later, the same social media platforms were used by the protesters to organise human chains, rallies and demonstrations in different parts of the country.

This is the first time in Bangladesh that such large-scale protests against sexual violence have been organised for a prolonged period. In January this year, a large day-long protest was held after a student of Dhaka University was raped in the capital.

Following that incident, the country’s High Court ordered the law ministry to form a commission within 30 days to address a troubling rise in sexual assaults and submit its report by June. More than nine months after the court order, the commission is yet to be formed.

“We are protesting against this culture of impunity and nonchalance,” said Auroni Semonti Khan, a Dhaka University student who led one of the protests in the city’s Shahbagh area.

“Justice has to be ensured in any case of rape.” 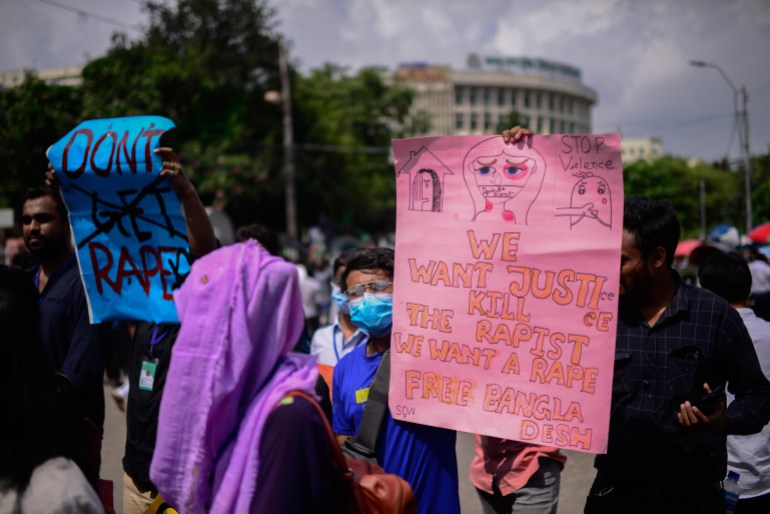 Capital punishment as a deterrent

According to the human rights group Ain-o-Salish Kendra (ASK), gang rapes accounted for more than a fifth of the nearly 1,000 sexual assaults reported between January and September this year.

Between April and August, as the world reeled under the coronavirus pandemic, four women were raped every day in Bangladesh, the ASK data showed.

Sounding a note of caution, Taqbir Huda, research specialist at Bangladesh Legal Aid and Services Trust (BLAST), told Al Jazeera that legislating capital punishment for sexual crimes may result in lower convictions as research has shown that stricter punishments have an inverse correlation with conviction in criminal cases.

“So, the more severe the punishment, the lower the rate of conviction is likely to be.”

In a statement on Saturday, Human Rights Watch (HRW) said the accused are “rarely held to account”.

“The conviction rate for rape in Bangladesh is below 1 percent,” it said.

The rights group added that survivors of sexual assaults who go to the police in Bangladesh “often face a refusal to file a case, bias, victim-blaming, stigma, and humiliation”

A 2013 survey conducted by the United Nations found that, among men in Bangladesh who admitted to committing rape, 88 percent of rural respondents and 95 percent of urban respondents said they faced no legal consequences.

“It is rather the victims and witnesses of rape who face social stigmatisation and threat from the perpetrators,” said Sadeka Halim, professor of sociology at Dhaka University, adding that many accused even received political protection.

“When women come to the police, first the police don’t believe her,” the HRW statement quoted a women’s rights lawyer as saying. “They shame her. The case starts with non-belief.”

Dhaka-based activist Zefroon Afsary told Al Jazeera that women and children are systematically barred from accessing justice through a “thriving culture of impunity against rapists, backed by ineffective trial processes” which often “shift the blame from the perpetrator to victim”.

“We should protest the practice of victim-blaming in open courts which is allowed by use of character evidence in rape trials,” she said.

“This means a woman’s character is arbitrarily weighed to evaluate her ‘worth’ to decide how much justice she deserves, based on her clothing, whereabouts and lifestyle choices.”