Two brothers banned from the poultry industry for a total of 17 years after starving more than a million chickens were involved in the acquisition of two aged care homes in Melbourne, despite being bankrupt at the time and having no experience.

Gerry and Chris Apostolatos used aliases, dummy directors and a family trust to conceal their roles with Chronos Care, which owns aged care facilities in Alphington and Mount Eliza, and has received millions of dollars in Commonwealth funding.

The involvement of the Apostolatos brothers over the past six years raises serious concerns about the regulation and oversight of Victoria’s aged care sector, where 655 elderly residents died from COVID-19 in 2020. 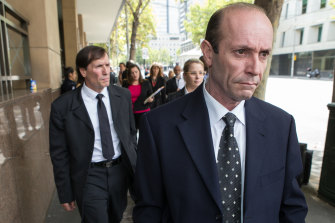 The Sunday Age can also reveal that Peter Arvanitis, the co-owner of Epping Gardens aged care home where 38 residents died from COVID-19 last year, provided extensive advice to Chronos Care when it was established in 2014.

A series of emails obtained by The Sunday Age reveal Mr Arvanitis provided guidance on most facets of the business, including introducing the Apostolatos brothers to a banker at NAB, recruitment of staff and measures to cut catering costs.

“After looking at the P/L [profit and loss statement] please consider the cost savings in removing the outsourcing of the kitchen. I believe you can save around $8000 per month,” Mr Arvanitis said in an email from May 2014.

At the time, Mr Arvanitis was chief executive of listed for-profit nursing home giant Estia Health, but would later offload his shareholding for $55 million in 2016 and quit the company.

In 2014, when Chronos Care purchased the homes in Alphington and Mount Eliza, the Apostolatos brothers did not appear on any corporate documents related to the homes that care for a total of 105 residents. 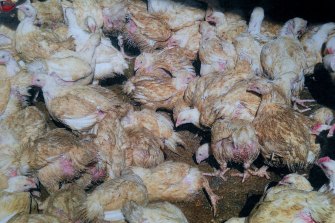 Court photographs from 2015 show some of the Apostolatos chickens.Credit:Jason South

They based themselves in offices near Camberwell Junction and appointed Gerry Apostolatos’ step-daughter, Rita Kohu as the director of a company called Mali Nominees, which was approved by the federal government as an aged care provider. Ms Kohu was previously employed by her step-father’s poultry business.

The Sunday Age has spoken with four senior former employees of Chronos Care, who were unable to speak on the record because they had signed confidentiality contracts when leaving the company. All four confirmed they had dealings with either Gerry or Chris Apostolatos and confirmed the brothers were “pulling all the strings”.

“They, particularly Gerry, had to approve every important decision that was made. They’ve been running the show the whole time, and they’ve appointed several of their kids to management roles in the business,” one former employee said.

The brothers concealed their real identities by using aliases in all internal communication with Chronos Care staff, but also in correspondence with the company’s lawyer and NAB business banker.

“When we first got introduced to you by Mr Peter Arvanitis you were explained that we were going to need as much assistance as possible from the bank since we are new to the industry,” said Mr Apostolatos in an email from August 2014 that he signed off as Andrian Gorman.

At the time, both men were bankrupt after their company Tip Top Livestock and several other subsidiary companies were placed into liquidation in 2012.

The pair were also facing serious animal cruelty charges and eventually pleaded guilty in March 2015 – about five months after they purchased the Mount Eliza aged care home known as Ranelagh.

According to the Aged Care Quality and Safety Commission Act, a person is prohibited from being an approved provider if they have been convicted of an indictable offence or insolvent.

Gerry Apostolatos admitted in the Melbourne Magistrates Court that he was responsible for the deaths of more than 86,000 chickens at six commercial farms.

Chris Apostolatos was found to have caused the deaths of more than 63,000 chickens, which had starved at three of their farms.

In all, more than one million birds had been mistreated, with some forced into cannibalism. Magistrate Joanne Metcalfe said the brothers’ actions had caused “appalling suffering” before disqualifying Gerry Apostolatos from the industry for 10 years, and banning Chris for seven years.

A barrister for Chris Apostolatos said her client had lost all his assets, had sold his family home and lost his savings.

However, the brothers have staged a remarkable reversal of fortunes over the past six years, as they transformed themselves from bankrupt chicken farmers into wealthy aged care operators.

Both men reside in sprawling homes in Templestowe and take their families on regular holidays to Greece.

Gerry Apostolatos recently stepped out of the shadows and became a director of Mali Nominees and another company called Mt Eliza Aged Care Pty Ltd in 2019.

When contacted for comment, Gerry Apostolatos initially denied any involvement with Chronos Care, before claiming he was a consultant. He then hung up.

Chris Apostolatos did not respond to requests for comment.

Chronos Care did not respond to repeated calls and emails from The Sunday Age.