Battered and bruised puppy who was hit, kicked and stamped in the head by her cruel owner for chewing a TV remote finds a loving new home

A puppy who was brutally hit, kicked and stamped on by her cruel owner after she chewed the TV remote controller has been found a loving new home.

Kia, an 11-month-old American bull type dog, was left with injuries to her face and eyes after the vicious attack in Rochdale.

A witness said they heard her yelping and heard a man shouting at Kia, before hitting her in the face, stamping on her and picking something up from the ground and hitting her twice in the head with it – all because she allegedly chewed the remote control for the TV.

A nervous and badly injured Kia was rescued from the violent home and taken into the care of the RSPCA’s Greater Manchester Animal Hospital. 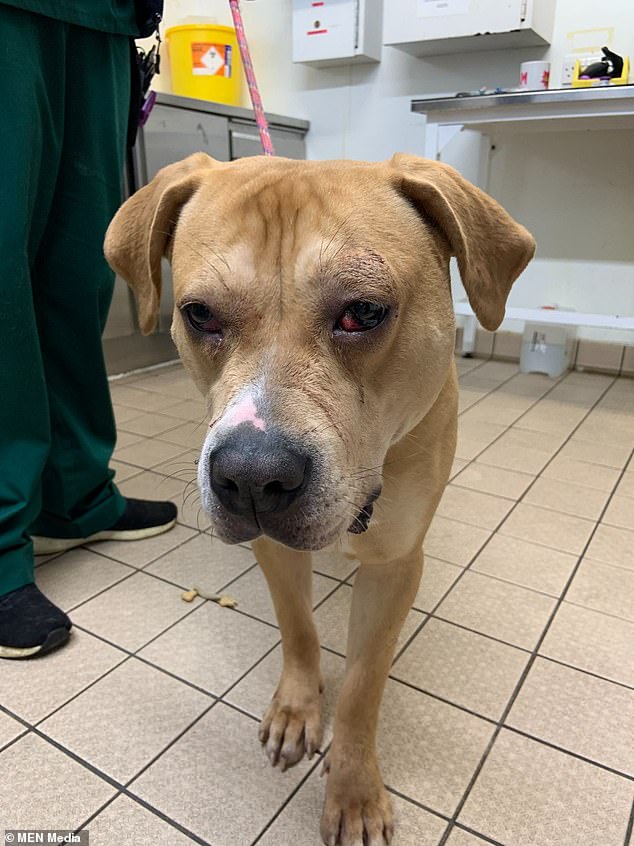 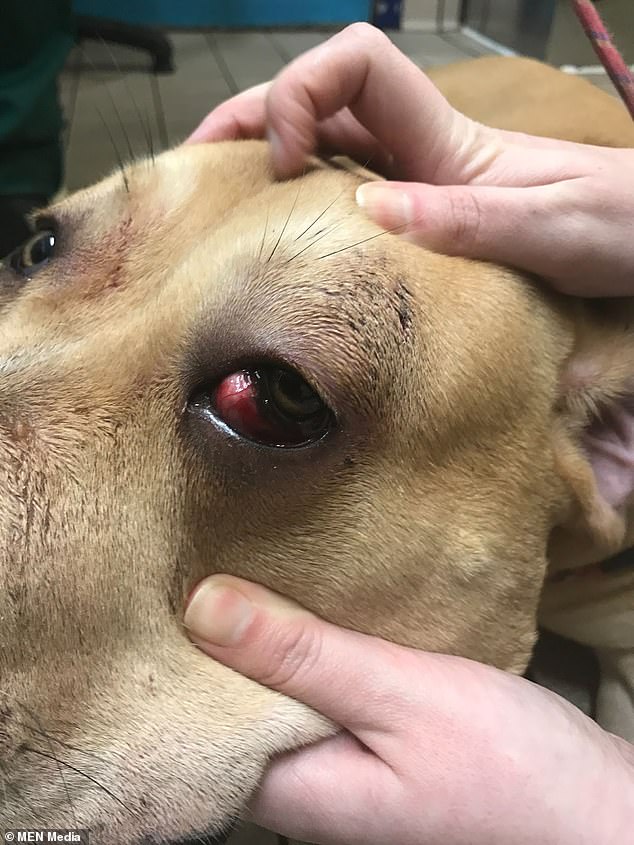 She was treated for bruising to her face, mouth and chin and stayed in hospital for two nights before being transferred to the RSPCA

She had injuries to her head and face, both of her eyes were red and bloodshot and there was a cut above her left eye.

Vets discovered bruising to her face, mouth, chin, neck and ears and she also had a fractured tooth.

She was treated at the hospital where she stayed for two nights before being transferred to the RSPCA Preston branch.

Inspector Beth Fazackerley, who investigated this incident, said: ‘Poor Kia was subjected to blunt force trauma by her previous owner which left her with nasty facial injuries.

‘Despite everything she had been through, even though she was clearly scared from the way she cowered before the vets, she showed no sign of aggression and was lovely and friendly towards me and the staff at the hospital.

‘She must have known we were there to help her!’

After being rehabilitated, Kia was later rehomed to Emily and Seth Snape-Gormley and their two children Soren, five, and Saben, two in Lancashire.

She was initially fostered by the family but they soon fell in love with her and adopted her in July last year.

Emily said: ‘We really love her, it feels like she’s always been part of our family. She’s settled in really well. 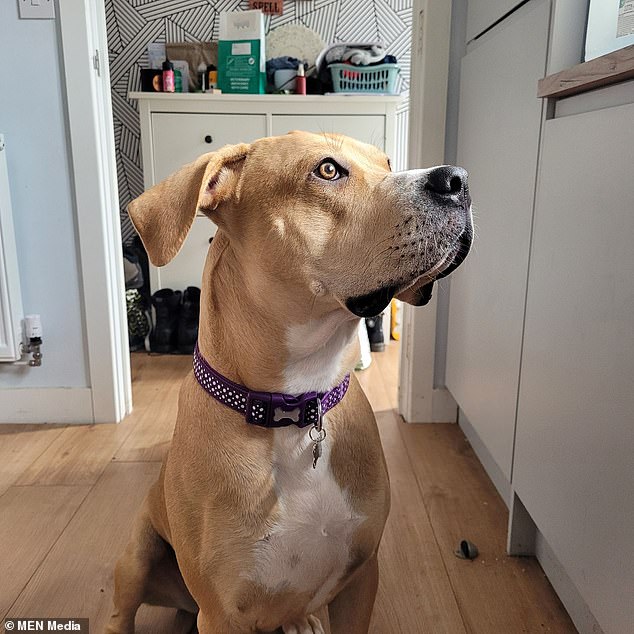 The American bull type dog has ‘settled in’ as part of the family. The RSPCA says it has seen a rise in cruelty cases like this following an increase in pet ownership during lockdown

‘She was a little bit wary at first and a bit withdrawn when she first arrived. When we walked near her she would flinch which was really sad to see and must have been because she’d been hit before.

‘She wasn’t as nervous as we expected though considering what she has been through. Thankfully, she’s much more comfortable now.

‘She’s really excitable and loves bounding around as though she’s still a puppy. She loves food, playing with balls and rope toys – basically anything we can throw so she can chase after it.

‘She’s really lovely with our children which is great. She’s really gentle and chilled with them. She’s definitely settled in as part of our family now and we have spent this Christmas spoiling her rotten!’

The RSPCA says it has seen a rise in cruelty cases like this following an increase in pet ownership during lockdown.

They have launched their Winter Appeal to help raise funds so they can continue their vital work and help more animals like Kia.