Home » BBC Weather: Bank Holiday scorcher as temperatures set to rocket to 23C across the country

BBC Weather: Temperatures set to rise across the UK

A continental front will bring soaring temperatures and lots of sunny weather to Britain this Bank Holiday after weeks of patchy weather. Saturday will see top temperatures of 20 to 21 C, which will rise to 23C by Monday. BBC Breakfast’s Louise Lear told viewers the weather is expected to stay dry throughout most of the UK over the weekend as an area of high pressure bathes the country in warm air pushing up from France and Spain.

The forecaster said it will be a “glorious weekend” for Brits up and down the country as the warm front arrives.

She added: “It is going to be increasingly sunny and the temperatures are going to be up into the mid-twenties on Monday.

“The final day of May we are going to see some warmth and above average temperatures.”

Ms Lear stressed: “For most of us this weekend it is all about high pressure that is going to be the dominant story.”

JUST IN Brexit LIVE: Alert over plot to scrap Australia trade deal -UK could STILL be ‘tied’ to EU 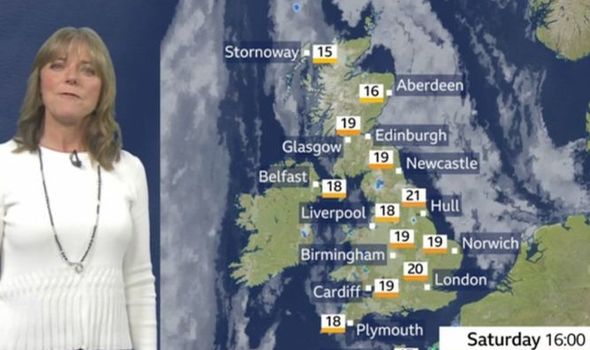 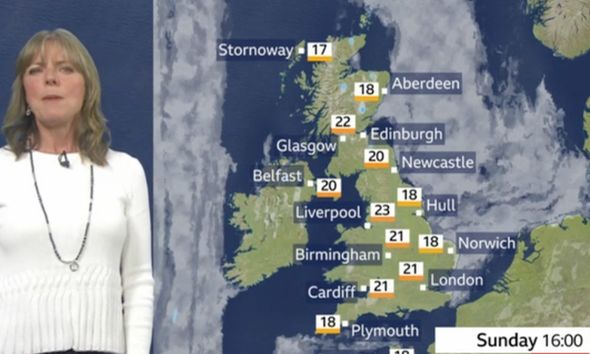 The weather presenter went on to say: “There has been a weather front and that brought some outbreaks of light rain yesterday, it is still responsible for quite a bit of cloud, a little bit of drizzle around.”

But she added: “The sunshine strong for this time of year.”

Saturday will see top temperatures of 20C in London, 19C in Birmingham, 19C in Cardiff, 19C in Newcastle, 19C in Glasgow and 18C in Liverpool.

But Ms Lear warned of high UV levels for much of the country as Britain will be bathed in sunshine over the weekend and into Sunday and Monday. 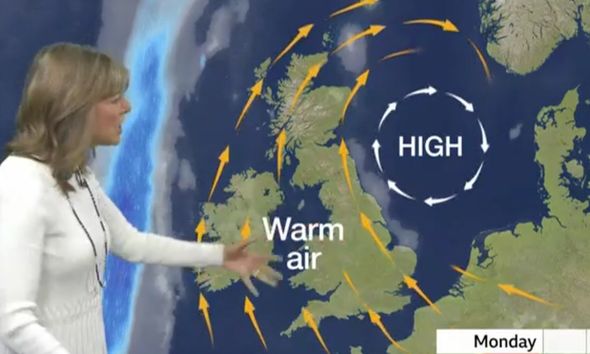 The forecaster added: “Generally speaking we keep that dry weather through the evening… but we will start to see some low cloud drifting in as we go through the night off the North Sea.

“Pleasant start to Sunday morning, could be a bit on the murky side across some areas of eastern England.”

Ms Lear said: “Generally through Sunday it will be dry, it is going to be settled, that cloud will disappear back towards the North Sea coast. 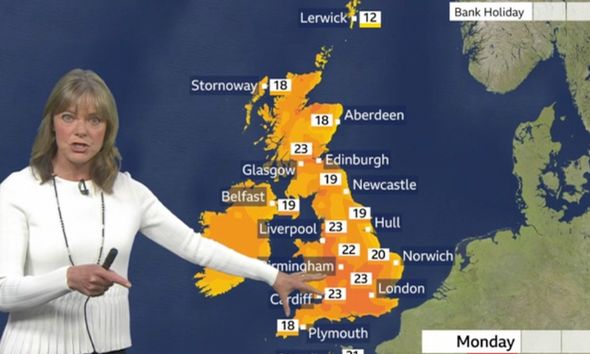 Sunday will see temeparatures rocket to a sweltering 23C in Liverpool, 21C in London, 20C in Belfast and 18C in Plymouth.

She added: “Because the high pressure is pushing off into the North Sea and the wind swings round in a clockwise direction that continues to drag up more warmth from the near continent.

Looking ahead into next week, she said: “As we go through the week ahead, we will see temperatures into the mid-twenties with the potential for a few showers to break out.”