The new Atlantic weather front barrelling towards the UK has been named as Storm Aiden and will hit the country on Wednesday. BBC Weather forecaster Carol Kirkwood warned the storm will bring disruptive showers and strong gales for most of the country between Wednesday and Thursday. The weather will clear out on Friday before another unsettling area of low pressure will dominate for the weekend.

She said: “The reason we’ve got this rain is because we have a weather front from the south-eastern corner of the UK, it’s moving further east through the course of the night.

“It’s fairly weak for now but it’s still producing light rain and also some drizzle. Very slowly through the day that will edge towards the North Sea clearing East Anglia last.

“Temperatures have fallen below freezing in parts of Scotland and Northern Ireland.

“Temperatures today ranging from 12C in north to 19C in the south.”

She added: “We have a weather front coming through the night from the west introducing rain across Northern Ireland and by the end of the night across parts of western England. 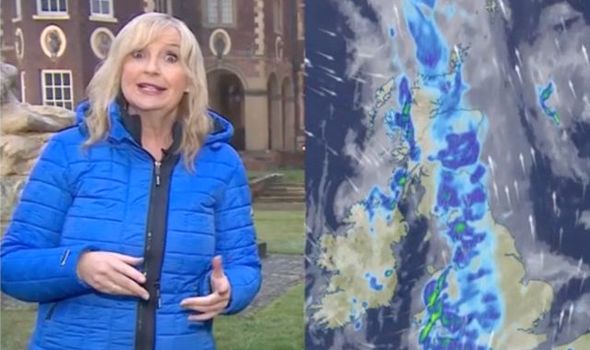 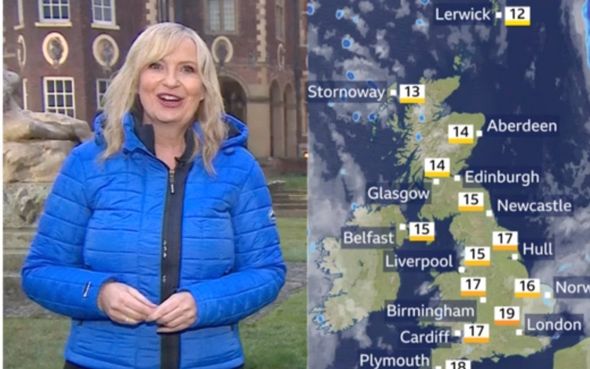 He said: “The Atlantic jetstream will really power up and could generate very wet and windy weather late in the week.

From Wednesday, a storm will bring 70mph winds with Scotland predicted to be hit the worst.

Heavy rainfall is also set to come crashing in with the stormy weather.

Temperatures are forecast to drop from the mid-teens Celsius to the very low single figures in some areas of the country.

Morning frost is expected to become common in the north and west of the UK towards the end of the week.

Alex Deakin, Met Office Meteorologist, said: “The weather could get very lively later this week so enjoy the relative serenity of Tuesday if you can where most places will be dry and bright with sunny spells after a bit of a chill in the air first thing.

DON’T MISS:
UK weather forecast: Flood warnings issued as Britain braces for FROST [FORECAST]
Cold weather grants: The FIVE payments can you claim this year [INSIGHT]
Cold weather payment: Who is eligible? How you could get cash boost [ANALYSIS] 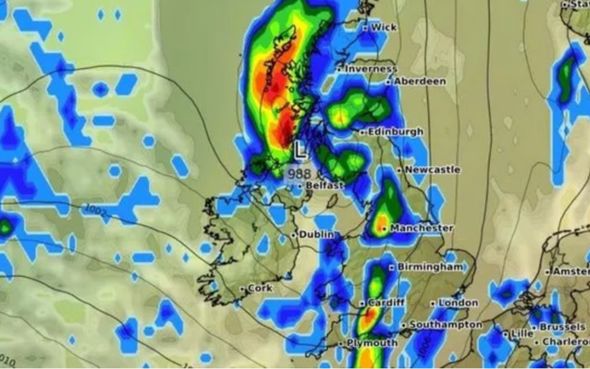 “The main exception to the sunny skies will be across parts of eastern England, particularly East Anglia where again like at the weekend it will stay predominantly cloudy here.

“Finally though across eastern England we lost the cloud that was sticking around through the weekend.”

Head of meteorological operations at the Weather Channel, Leon Brown, is expecting there to be five named storms in the autumn and winter of this year.

The Met Office has previously warned that this autumn will be windier than normal.