Belarus dictator Alexander Lukashenko has threatened to flood Europe with migrants and drugs in response to western sanctions over the Ryanair flight hijacking.

The strongman leader told parliament that he plans to weaken border controls designed to catch drug and people smugglers after EU leaders cut off air travel with his country and threatened further sanctions.

‘We were stopping migrants and drugs – now you will [have to] catch them and eat them yourself,’ he said.

It comes after world leaders including Joe Biden, Boris Johnson, Angela Merkel and Emmanuel Macron lined up to condemn Lukashenko for diverting a Ryanair flight to Minsk on Sunday so he could arrest a dissident journalist and his girlfriend. 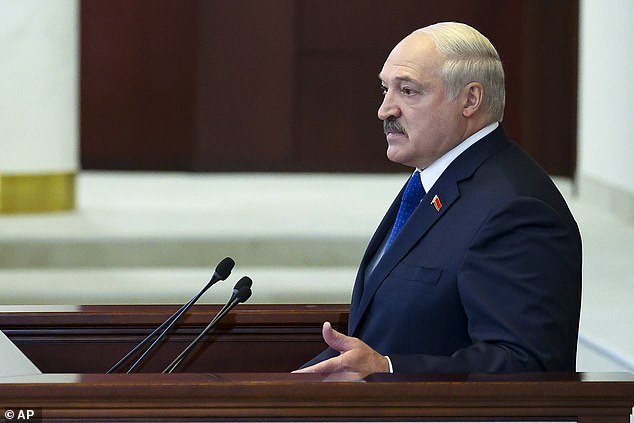 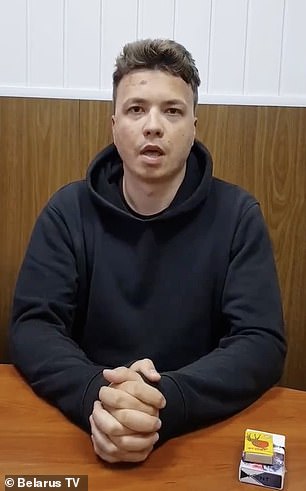 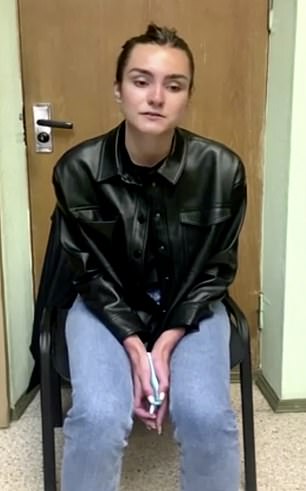 EU leaders subsequently advised all airlines to avoid Belarus airspace while moving to ban flights from the country entering theirs, potentially costing the regime tens of millions in lost revenue.

‘Targeted’ sanctions against members of Lukashenko’s government are also being prepared, the EU said, in addition to long-standing sanctions on the regime.

EU leaders called for Belarusian airlines to be banned from European airspace and urged EU-based carriers to avoid flying over the country.

While the move is partly political, it could also cost the regime millions in lost air traffic control fees.

Here are the airlines that have so-far banned or restricted their pilots from flying in Belarus airspace:

The UN security council is also due to meet in a closed-door session today to discuss the issue further.

But Lukashenko shrugged off that criticism today – insisting that he acted ‘in line with the law’ when he diverted the flight as it crossed his airspace.

According to Lukashenko, the diversion had nothing to do with Roman or Sofia and actually took place after a bomb threat was issued out of Switzerland.

‘How were we supposed to act,’ he asked. ‘My post requires me to protect people. I was thinking about the safety of the country.

‘I could not allow the plane to fall on our people’s heads. I acted in line with the law, protecting my people. And I will continue to do so.’

Around 1,500 migrants enter Europe each year through its eastern borders, according to monitoring group Frontex, which says it is the least-busy route to the continent.

Only a small number of those come via Belarus, the organisation says, though it is not clear how many are stopped from crossing.

Lukashenko then suggested that sanctions are part of an international ‘hybrid war’ against his country, which he says is being targeted because it is a close ally of Russia.

‘Our ill-wishers from outside and inside the country have changed the methods of attacking the state,’ he told lawmakers. ‘They have crossed red lines, crossed the boundaries of common sense and human morality.

‘This is no longer an information war, this is a hybrid modern war. Everything must be done, so that it does not grow into a hot one.’

‘They are looking for new vulnerabilities, and this is directed not only at us: we are a testing ground for them, an experimental site before the dive to the East.

‘After testing with us, they will go there.’

Lukashenko has faced unprecedented pressure at home with months of protests triggered by his reelection to a sixth term in an August 2020 vote that the opposition rejected as rigged.

But he has only doubled down on repression, and more than 35,000 people have been arrested since the protests began, with thousands beaten.

Lukashenko views Protasevich as an organiser of those protests over his work at a Telegram channel called Nexta, which demonstrators used to rally themselves.

He is now being held in Belarus on terrorism charges. It is unclear exactly what the charges against Sofia are, but she has also been accused of having links to protests.

But while western leaders are attempting to isolate and pressurize Lukashenko with sanctions, analysts said the short-term impact will be limited.

Anne Applebaum, an author and historian, said Lukashenko likely ‘made a decision’ ahead of the hijacking that sacrificing his ties to the west was worth it because he can simply rely on Russia instead.

Belarus – a former Soviet state – already benefits heavily from its ties to Moscow in the form of cut-price oil it sells at a profit, along with other financial concessions.

‘He has decided that remaining in power, the fate of his regime and probably his personal safety matters to him more than the rest of the country.’

But she added that sanctions are still an important tool that could pressure elites within Belarus to rebel and oust Lukashenko.

‘I think that’s what the Belarus opposition wants to have happen,’ she said.