Ben Wallace has made a secret visit to Kyiv as Boris Johnson condemned the ‘appalling’ death sentence for two Britons captured fighting alongside Ukrainian forces.

The Defence Secretary held talks with President Volodymyr Zelensky about further military support during the trip.

Officials would only say that the two-day visit took place ‘this week’ and it was unclear whether they discussed the Britons facing execution for lining up against Vladimir Putin.

It emerged as Downing Street said the PM has ordered ministers to do ‘everything in their power’ to secure the release of Aiden Aslin and Shaun Pinner.

Mr Zelensky replies: ‘We do it together.’ 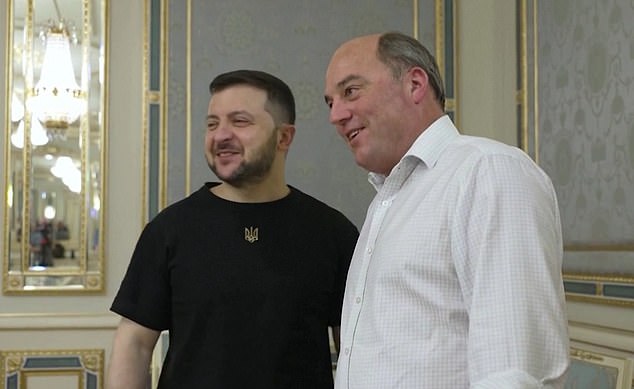 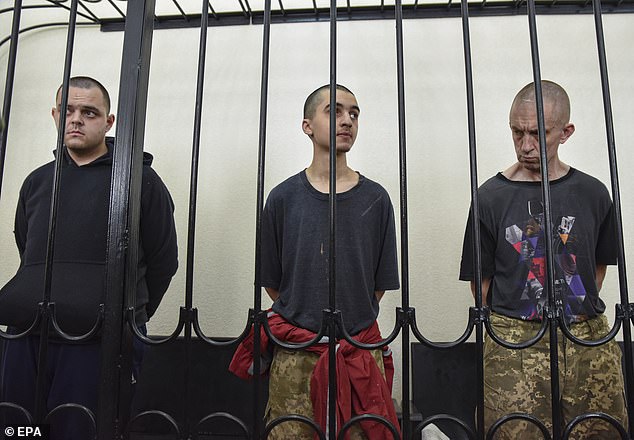 Downing Street said the PM has ordered ministers to do ‘everything in their power’ to secure the release of Aiden Aslin (left) and Shaun Pinner (right). Central, Moroccan national Saaudun Brahim has been sentenced alongside the Britons

Foreign Secretary Liz Truss discussed efforts to secure the release of Mr Aslin and Mr Pinner with her Ukrainian counterpart on Friday, after the judgment by a Russian proxy court.

Ukraine’s ambassador to the UK, Vadym Prystaiko, suggested negotiations for a possible prisoner swap with Moscow were under way.

A relative of Mr Aslin said the 28-year-old and Mr Pinner, 48, ‘are not, and never were, mercenaries’ and should be treated as prisoners of war, as they were fighting as part of the Ukrainian army.

The men were convicted of taking action towards violent seizure of power, at a court in the self-proclaimed Donetsk People’s Republic.

A No10 spokesman said: ‘The Prime Minister was appalled at the sentencing of these men.

‘He has been following the case closely and has asked ministers to do everything in their power to try and reunite them with their families as soon as we can.

‘We completely condemn the sham sentencing of these men to death. There’s no justification at all for this breach of the protection they’re entitled to.’

Ms Truss said she discussed ‘efforts to secure the release of prisoners of war held by Russian proxies’ during her call with Dmytro Kuleba, Ukraine’s minister of foreign affairs.

‘The judgment against them is an egregious breach of the Geneva Convention,’ she added.

Mr Prystaiko believed the two Britons, who he said were targeted for the UK’s support of Kyiv’s resistance against Russian President Vladimir Putin, will be released in exchange for prisoners held by Ukrainian forces.

The ambassador told BBC News: ‘It will be a swap. ‘The important question is what will be the price for this, because the Russians were talking about some Ukrainian MPs being swapped for them, especially for those who, I now understand, were working for them for all these years.’

Mr Wallace discussed how the UK can continue supporting Kyiv ‘as the conflict enters a different phase’ with his Ukrainian counterpart Oleksii Reznikov and Mr Zelensky.

The Ministry of Defence would only say that the two-day visit took place ‘this week’ and it was unclear whether they discussed the men who were sentenced yesterday.

Russian foreign minister Sergei Lavrov said the convictions were ‘guided by the laws of the Donetsk People’s Republic’, the breakaway state controlled by pro-Moscow separatists.

‘Because these crimes were committed on the territory of the Donetsk People’s Republic, all the rest is speculation,’ he told a press conference.

The Government was resisting calling in Russia’s ambassador to the UK to discuss the case as officials walk a diplomatic tightrope.

There were concerns that making their case an issue between the UK and Russia would assist Moscow in its narrative that the men are ‘mercenaries’ and therefore not entitled to protection under international law.

Britain argues that Mr Aslin, from Newark in Nottinghamshire, and Mr Pinner, from Bedfordshire, are legitimate members of the Ukrainian army and should therefore be treated as prisoners of war.

In a statement to the Newark Advertiser, a member of Mr Aslin’s family said: ‘We love Aiden with all our hearts. He and Shaun, as members of Ukrainian armed forces, should be treated with respect, just like any other prisoners of war.

‘They are not, and never were, mercenaries.

‘We hope that this sentence will be overturned and beseech the governments of the UK and Ukraine to do everything in their power to have them returned to us safely, and soon.

‘We can only imagine what they are going through right now.

‘This is a very upsetting development and we ask that our privacy is respected at this time.’

The men were accused of being ‘mercenaries’ after fighting with Ukrainian troops. Interfax, a Russian news agency, claimed the men would be able to appeal against their convictions.

Mr Aslin and Mr Pinner were both members of regular Ukrainian military units fighting in Mariupol, the southern port city which was the scene of some of the heaviest fighting since Vladimir Putin’s invasion of Ukraine. 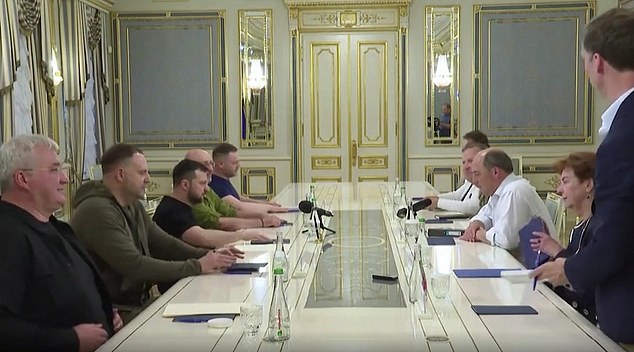 Tory former minister Robert Jenrick, who represents the constituency where Mr Aslin lived, called for the Russian ambassador to the UK to be summoned to the Foreign Office.

It comes after a friend of Mr Aslin said the death sentences will ‘invigorate’ those still resisting Russia’s advances.

Mr Wallace, who also held discussions with his Ukrainian counterpart Oleksii Reznikov, wanted to hear ‘first-hand’ how the army’s requirements are ‘developing as the nature of the conflict continues to change’.

‘This will ensure that the UK’s continued support is evolving to meet those requirements and is tailored to the situation on the ground,’ the MoD said.

‘The three agreed to work even more closely going forward in support of their shared goal of enabling Ukraine to liberate itself from illegal Russian occupation.

‘They also discussed the range of equipment and training the UK is currently providing and what further support we can offer to help Ukrainian forces to defend their country.’

Mr Zelensky presented him with what appeared to be a signed and framed collection of ‘Russian warship, go f*** yourself’ stamps.

The slogan has become a symbol of the national resistance after a Ukrainian guard defending Snake Island in the Black Sea dismissed an attacking ship with the words.