Biden made the announcement from Wilmington, Delaware, after the Capitol was placed on lockdown. 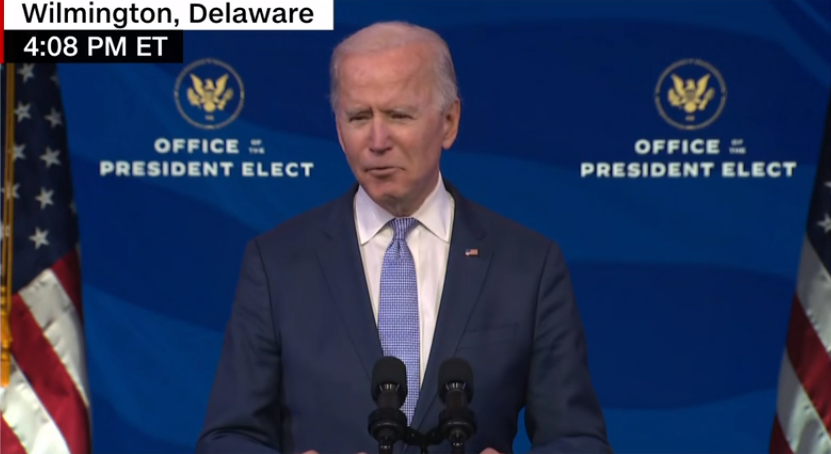 The president-elect called for Trump "to go live on TV right now to denounce this violence" – and said the nation's democracy was "under assault".

“Our democracy is under unprecedented assault unlike anything we’ve seen in modern times,” he said as pro-Trump supporters storm the Capitol.

"Assault on the citadel of liberty, the Capitol itself. An assault on the people’s representatives, on the Capitol Hill police sworn to protect them, on the public servants who work at the heart of our republic," he continued.

He made his speech as tensions continue to boil over outside the capital, with ugly scenes developing between police and pro-Trump supporters.

“The scenes of chaos in the Capitol do not reflect true America, do not represent who we are,” said Biden.

“This is not dissent. It’s disorder. It’s chaos. It’s bordering on sedition. And it must end, now. I call on this mob to pull back and allow the work of democracy to go forward.

The President-Elect called on Trump supporters to end what he described as a "seige" on the nation's Capitol.

He blasted: "At their worst, they can incite. Therefore, I call on President Trump to go on national television now, to fulfill his oath, to defend the constitution, and demand an end to this siege.”

As he concluded his speech, Biden again addressed the outgoing president asking him to "step up."

But moment after his speech the president called for supporters to end their demontrstaion.

In a video on Twitter, he repeated an unsupported claim the election was stolen, but said: “You have to go home now.