WASHINGTON — As President Biden prepares on Wednesday to open an ambitious effort to confront climate change, powerful and surprising forces are arrayed at his back.

Automakers are coming to accept that much higher fuel economy standards are their future; large oil and gas companies have said some curbs on greenhouse pollution lifted by former President Donald J. Trump should be reimposed; shareholders are demanding corporations acknowledge and prepare for a warmer, more volatile future, and a youth movement is driving the Democratic Party to go big to confront the issue.

But what may well stand in the president’s way is political intransigence from senators from fossil-fuel states in both parties. An evenly divided Senate has given enormous power to any single senator, and one in particular, Joe Manchin III of West Virginia, who will lead the Senate Energy Committee and who came to the Senate as a defender of his state’s coal industry.

Without doubt, signals from the planet itself are lending urgency to the cause. Last year was the hottest year on record, capping the hottest decade on record. Already, scientists say the irreversible effects of climate change have started to sweep across the globe, from record wildfires in California and Australia to rising sea levels, widespread droughts and stronger storms.

“President Biden has called climate change the No. 1 issue facing humanity,” Gov. Jay Inslee of Washington said. “He understands all too well that meeting this test requires nothing less than a full-scale mobilization of American government, business, and society.”

Mr. Biden has already staffed his government with more people concerned with climate change than any other president before him. On his first day in office, he rejoined the Paris Agreement on climate change.

But during the campaign, he tried to walk a delicate line on fracking for natural gas, saying he would stop it on public lands but not on private property, where most of it takes place.

A suite of executive actions planned for Wednesday does include a halt to new oil and gas leases on federal lands and in federal waters, a move that is certain to rile industry. But that would not stop fossil fuel drilling. As of 2019, more than 26 million acres of United States land were already leased to oil and gas companies, and last year the Trump administration, in a rush to exploit natural resources hidden beneath publicly owned lands and waters, leased tens of thousands more.

If the administration honors those contracts, millions of publicly owned acres could be opened to fossil fuel extraction in the coming decade.

The administration needs to do “much, much more,” said Randi Spivak, who leads the public lands program at the Center for Biological Diversity. 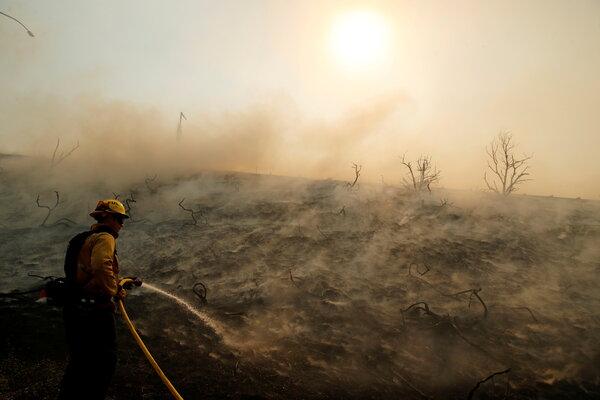 Also on Wednesday Mr. Biden is expected to elevate climate change as a national security issue, directing intelligence agencies to produce a National Intelligence Estimate on climate security, and telling the secretary of defense to do a climate risk analysis of the Pentagon’s facilities and installations.

He will create a civilian “climate corps” to mobilize people to work in conservation; create a task force to assemble a governmentwide action plan for reducing greenhouse gas emissions; and create several new commissions and positions within the government focused on environmental justice and environmentally friendly job creation.

The real action will come when Mr. Biden moves forward with plans to reinstate and strengthen Obama-era regulations, repealed by the Trump administration, on the three largest sources of planet-warming greenhouse emissions: vehicles, power plants and methane leaks from oil and gas drilling wells.

It may take up to two years to put the new rules in place, and even then, without new legislation from Congress, a future administration could once again simply undo them.

Legislation with broad scope will be extremely difficult. Many of the same obstacles that blocked President Barack Obama a decade ago remain. The Senate Republican leader, Mitch McConnell, will very likely oppose policies that could hurt the coal industry in his state, Kentucky.

So will Senator Manchin, who campaigned for his seat with a television advertisement that featured him using a hunting rifle to shoot a climate change bill that Mr. Obama had hoped to pass. In the decade since, he has proudly broken with his party on policies to curb the use of coal.

“I have repeatedly stressed the need for innovation, not elimination,” Senator Manchin said in a statement. “I stand ready to work with the administration on advancing technologies and climate solutions to reduce emissions while still maintaining our energy independence.”

“There is wide scope for the executive branch to reinstate what Obama did and go beyond,” said Michael Oppenheimer, a professor of geosciences and international affairs at Princeton University.

But, he added, “if you want something that will stick, you have to go through Congress.”

To Mr. Biden’s advantage, some corporations have turned to friend from foe.

Mr. Biden’s team is already drafting new national auto pollution standards — based on a deal reached between the state of California and Ford, Honda, BMW, Volkswagen and Volvo — that would require passenger vehicles to average 51 miles per gallon of gasoline by 2026. The current Trump rules only require fuel economy of about 40 miles per gallon in the same time frame.

And just two weeks after Mr. Biden’s electoral victory, General Motors signaled that it, too, was ready to work the new administration.

“President-elect Biden recently said, ‘I believe that we can own the 21st century car market again by moving to electric vehicles.’ We at General Motors couldn’t agree more,” wrote Mary Barra, the chief executive of GM, in a letter to leaders of some of the nation’s largest environmental groups.

If enacted, a fuel economy rule modeled on the California system could immediately become the nation’s single-largest policy for cutting greenhouse gases.

Mr. Biden’s team is also drafting plans to reinstate Obama-era rules on methane, a planet-warming gas over 50 times more potent than carbon dioxide, though it dissipates faster. Last summer, when Mr. Trump rolled back those rules, the oil giants BP and Exxon called instead to tighten them.

The new president has also found broad support for rejoining the Paris Agreement, a global accord under which United States pledged to cut greenhouse emissions about 28 percent below 2005 levels by 2025.

Rejoining the accord means honoring commitments. Not only must the United States meet its current target (right now it’s about halfway to that goal) but it will soon also be expected set new and more ambitious pledges for eliminating emissions by 2030.

ExxonMobil, Shell, BP, and Chevron all issued statements of support for Mr. Biden’s decision to rejoin. So did the United States Chamber of Commerce and the American Petroleum Institute, which once supported a debunked study claiming the Paris Agreement would lead to millions of job loses.

“As policy is being developed by the administration, by members of Congress, we want to have a seat at the table,” said Neil Bradley executive vice president and chief policy officer at the chamber of commerce.

Other energy industry executives said action by Congress on climate change was long overdue, with many pressing for some kind of tax on oil, gas and carbon emissions to make climate-warming pollution less economical.

“Having a clear price signal that says ‘Hey, it’s more cost efficient for you to buy an electric car than another big truck’ is exactly what we want happening, not somebody in government deciding that they’re going to outlaw something,” said Thad Hill, the chief executive of Calpine, a power generating company based in Texas that also supports the Paris Agreement goals.

The Democrats’ razor-thin majority is no guarantee of action. In the Senate, Democrats are 10 votes short of the 60 needed to break a filibuster that would almost certainly come with legislation that would replace coal and oil with power sources such as wind, solar and nuclear energy, which do not warm the planet.

In a Monday night interview on MSNBC, Senator Chuck Schumer of New York, the majority leader, acknowledged how difficult a strong legislative response will be.

Instead, he called on Mr. Biden to declare climate change a “a national emergency.”

“Then he can do many, many things under the emergency powers of the president that wouldn’t have to go through — that he could do without legislation,” Senator Schumer said. “Now, Trump used this emergency for a stupid wall, which wasn’t an emergency. But if there ever was an emergency, climate is one.”

Senator Thomas Carper of Delaware, chairman of the Environment Committee and one of Mr. Biden’s oldest friends, said he would do what he could to insert climate-friendly policies into larger pieces of legislation. Democrats hope a pandemic recovery bill will include hundreds of billions of dollars for environmentally focused infrastructure, such as Mr. Biden’s plans to build 500,000 electric-vehicle charging stations and 1.5 million energy efficient homes and housing units.

Senator Carper also said he hoped to revive modest legislation that has in the past received bipartisan support, such as extending tax breaks for renewable power sources, supporting the construction of new nuclear power facilities, and improving energy efficiency in buildings.

“You may call it incrementalism,” Mr. Carper said. “But I call it progress.”