‘Big Six’ energy companies lose around 500,000 customers in a year after households switch to smaller firms over ‘rip-off’ prices

Major energy firms are thought to have lost around 500,000 customers this year alone following accusations of rip-off prices.

Following soaring energy tariffs, ministers have accused the dominant players in the market of greed and campaigners have urged consumers to hunt for better deals.

To prevent firms overcharging, in January the Government imposed an annual energy price cap, which now stands at £1,254 for a standard default tariff. 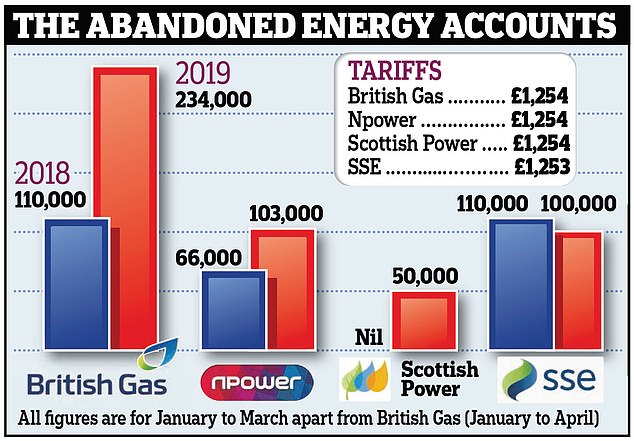 Figures revealing how many house holds switched out of accounts with the Big Six energy suppliers, a total of around 500,000 this year so far

But figures released by four of the Big Six reveal households switched out of around 500,000 gas and electricity accounts by the end of April.

Only British Gas and Npower have revealed the number of customers lost, at 183,000 and 40,000 respectively.

The French firms EDF and Eon have not disclosed how many accounts or customers switched this year. Eon said its UK business was ‘under considerable pressure’, while EDF sales have fallen 2.9 per cent.

But if their figures are anything like those of their rivals, and all six continued to lose accounts at a similar rate, the total figure could be much higher than the 487,000 gas and electricity accounts already lost – most likely amounting to more than 500,000 customers.

Figures from industry group Energy UK show the number of customers switching supplier in the first quarter of 2019 rose by 12 per cent compared with the same period last year.

More than 1.45million energy switches took place from the start of January to the end of March – up from 1.3million in the same period of last year.

As well as customer dissatisfaction, energy firms are also facing the spectre of nationalisation, with leaked documents showing that the Labour Party is considering bringing utility companies back into public ownership.

SSE now wants to offload its beleaguered supply business – which lost 570,000 domestic energy accounts last year – by the middle of 2020, having failed to merge it with Npower’s.

Laith Khalaf, senior analyst at the investment website Hargreaves Lansdown, said: ‘The big energy providers have been losing customers hand over fist as a host of challenger brands have sprung up and the new energy price cap has disrupted the market.

‘The threat of nationalisation also hangs over the share prices of these companies, as the Labour Party wants the government to take control of the sector.’ 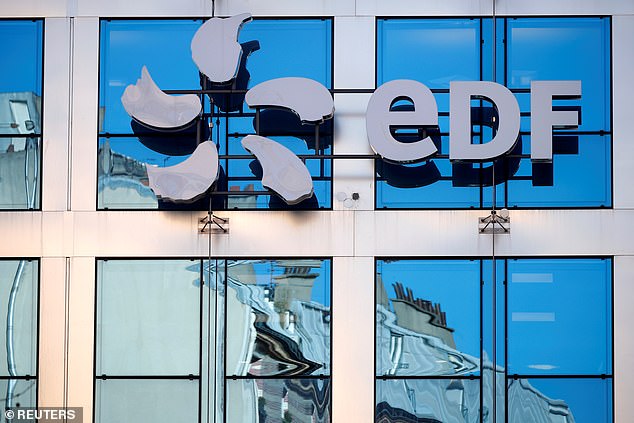 The logo of EDF (Electricite de France) is seen on the French state-controlled utility EDF’s headquarters in Paris, France

Victoria Arrington, from the price comparison site Energyhelpline, said: ‘It’s undeniable that customer numbers at the Big Six are falling.

‘Customers have woken up and see that there are better deals to be had out there in exchange for little effort.

‘These customer losses should serve as an alarm bell to the Big Six. There is a wide range of quality suppliers and tariffs out there, including ultra-cheap deals, bargain renewable tariffs, and low-rate long-term fixes.’

However, the Energy Ombudsman has warned that complaints about switching energy suppliers have overtaken quality of service to become customers’ second biggest grievance.

The following month, she said a price rise from SSE was ‘unjustified’, while consumer experts warned that anyone on a standard Big Six tariff was ‘ripping themselves off’.

Two years ago, Theresa May stepped in to describe the energy market as being broken because it ‘punishes loyalty with higher prices’.

The Prime Minister said most loyal customers tended to be on lower incomes, the elderly, people with lower qualifications and people who rent their homes – in other words, those who can least afford to pay more for utilities.

As a result, she brought in the price cap to protect dual-fuel customers on standard tariffs from being ‘ripped off’ by energy companies.