Bill Clinton snubbed the Queen’s offer of tea at the Palace and instead wanted to be a ‘tourist’ in London and eat at an Indian restaurant, files reveal

Bill Clinton snubbed the Queen’s offer of tea at the Palace when he visited the UK in 1997, newly released files reveal.

When the US president came to visit newly elected prime minister Tony Blair, his aides insisted the trip be ‘fun’ rather than formal.

Mr Clinton wanted to be a ‘tourist’ in London, and to eat at an Indian restaurant, according to the files.

Discussing tea with the Queen, John Holmes, Mr Blair’s private secretary, wrote: ‘The White House were definitely not seeking a contact with the Palace.

‘The Clintons would want the ‘fun’ bit of the programme to be very informal.’

He added: ‘Unless the UK side signalled that the absence of a call there might cause offence, the White House would certainly not seek one.’ 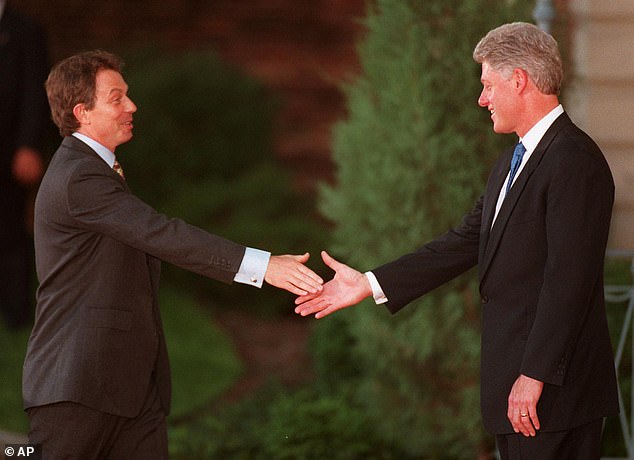 US President Bill Clinton snubbed the Queen’s offer of tea at the Palace when he visited the UK to meet newly elected Prime Minister Tony Blair in 1997, newly released files have revealed 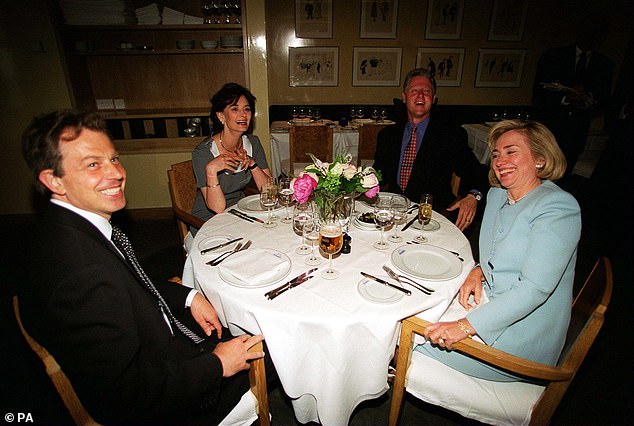 Pictured: Bill Clinton and his wife Hillary with Tony Blair (left) and his wife Cherie (2nd left) having dinner at Le Pont de la Tour Restaurant in London during their visit to the UK in 1997

In the end, the president, the prime minister, and Hillary and Cherie, their respective partners, dined at a French restaurant in London Bridge, where they drank beer and fine wine with their meals.

The logistics – and the restaurant bill – are contained within a series of files released by the National Archives, Kew, dating back to Mr Blair’s first few months in Government.

Memos between Whitehall aides the week before the Clintons’ arrival highlighted that the Queen had invited the president – with or without Mr Blair and their partners – to 5pm tea at the Palace. 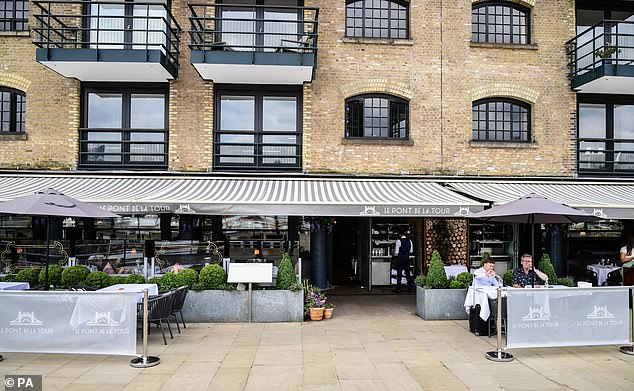 He said: ‘The Americans said that the president and Mrs Clinton were very grateful for HM The Queen’s invitation to tea at the palace, but would wish to decline politely.’

The memo added: ‘The president had said that he ‘wanted to be a tourist’ and had also expressed an interest in visiting a garden, shops and Indian food.

‘They hope that the PM would accompany him.’

Updating the prime minister of the draft itinerary a few days later, Mr Barton said the Clintons would meet staff at the US Embassy before possibly visiting a garden and doing some shopping.

He said: ‘You and Cherie would then join them for an early evening supper at a restaurant somewhere in West London – possibly an Indian (Clinton has expressed an interest in trying Indian food). 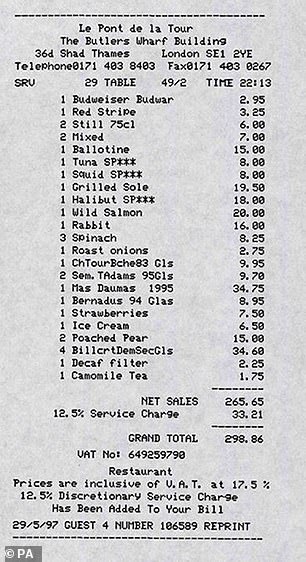 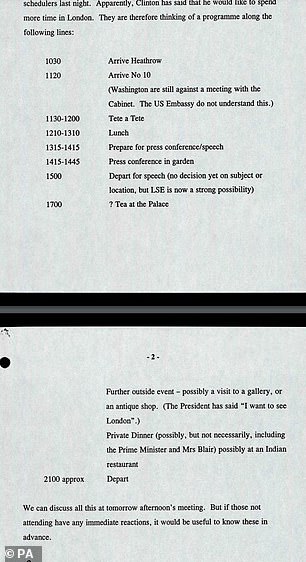 Newly released documents have shed light on the President’s visit. Pictured: (L) a receipt from the dinner at Le Pont de la Tour Restaurant and (R) memos between aides discussing the visit

‘His people are very keen to give Clinton the impression that he has a choice of where to eat that evening, although in fact they will have cased a range of restaurants beforehand.’

The restaurant chosen for the quartet was Le Pont de la Tour, in London Bridge.

So impressed was Mr Blair with the experience that he wrote to the restaurant thanking staff for the ‘magnificent’ food.

‘The relaxed atmosphere was just what we needed,’ he said.