Blinken says Putin is ‘gaslighting’ the world with his Ukraine ‘ruse’: Secretary of State gives Russia stern warning as US rejects claims they are taking American troops OUT of Eastern Europe in deal with Moscow

Sec. of State Antony Blinken stepped up his rhetoric with Russia, accusing Vladimir Putin of ‘gaslighting’ the world as the State Department denied reports President Biden was willing to draw down the U.S. troop presence in Eastern Europe in exchange for Moscow pulling its soldiers back from the Ukraine border.

Next week NATO foreign ministers, senior U.S. and Russian officials and the NATO-Russia Council will participate in a flurry of meetings in Europe, following a phone conversation between Biden and Putin last week.

While the U.S. remains unclear on whether Russia is serious about negotiations, U.S. officials are prepared to offer a mutual drawdown in that region of the world, according to a NBC News report.

‘It is not accurate that the administration is developing options for pulling back U.S. forces in Eastern Europe in preparation for discussions with Russia next week, which we told NBC while they were reporting this story,’ he wrote on Twitter.

‘In fact, we have been clear with Russia, publicly and privately, that should Russia further invade Ukraine we would reinforce our partners on the eastern flank, to whom we have sacred obligation as Allies.’

Blinken, who will attend next week’s talks, seemed pessimistic that Russia would oblige, as he stepped rhetoric against the former Soviet Union.

‘No one should be surprised if Russia instigates a provocation or incident then tries to use it to justify military intervention hoping that by the time the world realizes the ruse, it’ll be too late,’ Blinken told reporters Friday. ‘The idea that Ukraine is the aggressor in this situation is absurd.’

Blinken accused Russia of ‘gaslighting’ the world with accusations that Ukraine is provoking the fight.

‘Beyond its military aggression, Moscow has also worked to undermine Ukraine’s democratic institutions, it’s interfered in Ukraine’s politics and elections, blocked energy and commerce to intimidate its leaders and pressure its citizens, it’s used propaganda to sow mistrust, it’s launched cyber attacks on the country’s critical infrastructure, then starting last March and continuing through the fall, Russia began a massive, unprovoked buildup of forces and equipment on Ukraine’s border,’ Blinken said. 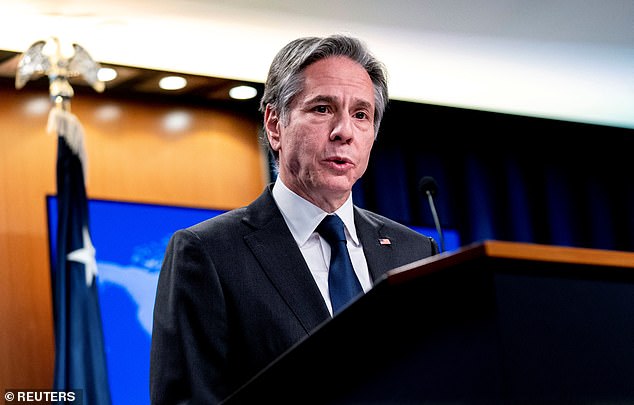 Sec. of State Antony Blinken, who will attend next week’s talks, seemed pessimistic that Russia would oblige, as he stepped rhetoric against the former Soviet Union 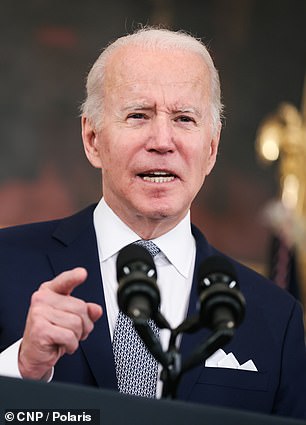 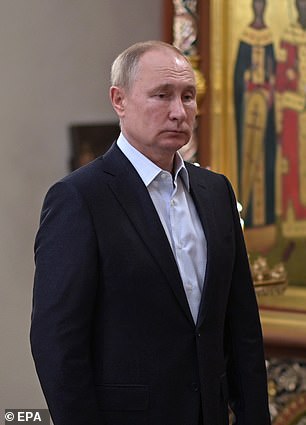 President Biden is now willing to draw down the U.S. troop presence in Eastern Europe in exchange for Vladimir Putin pulling some of his soldiers back from the border with Ukraine

‘We’ve seen this gaslighting before, when Russia invaded Ukraine in 2014, it claimed that Ukraine was the aggressor to justify pre-planned military action.’

Offers on the table next week could include negotiation on the scope of military drills by both powers, the number of U.S. troops stationed in the Baltic States and Poland, advance notice about the movement of forces and and Russia’s nuclear-capable Iskander missiles in the Russian territory of Kaliningrad between Poland and Lithuania, sources told NBC News.

Of the roughly 70,000 U.S. troops stationed in Europe, about 6,000 are deployed to Eastern Europe on a rotating basis, about including about 4,000 in Poland. Other NATO countries rotate in thousands of troops to the region to protect the alliance’s eastern front. 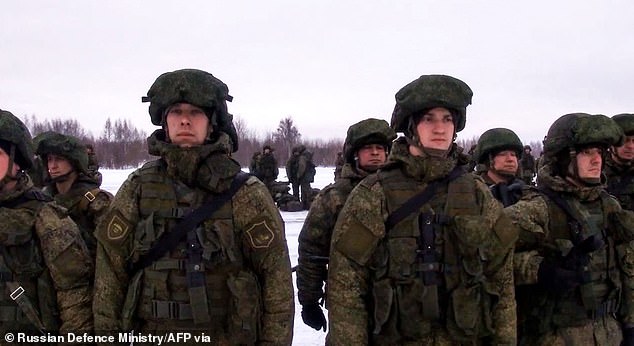 Russia has moved some 100,000 troops near the border with Ukraine 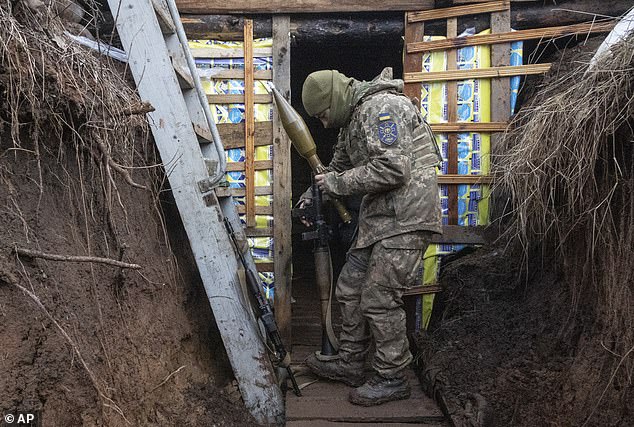 A Ukrainian marine at a fighting position on the line of separation from pro-Russian rebels, Donetsk region, Ukraine, on Friday 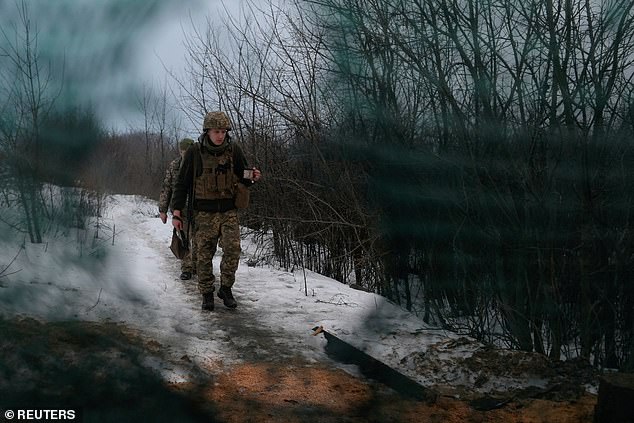 Service members of the Ukrainian armed forces walk at combat positions near the line of separation from Russian-backed rebels outside the town of Popasna in Luhansk Region, Ukraine on Thursday

Any talks of changes for the U.S. military presence in the region could trigger alarm bells for NATO allies in that region, particularly Poland and the Baltic states of Estonia, Latvia and Lithuania. Those nations rely on U.S. and NATO assistance to stave off Russia, as they were once dominated by the former Soviet Union.

Back at home, Republicans criticized the news of a potential drawdown too.

‘Unbelievable, and not just because of the timing. If Biden was trying to signal weakness & surrender to Putin, what would he be doing differently?’ Sen. Ted Cruz, R-Texas, wrote on Twitter.

‘This is appeasement. Joe Biden is becoming the new Neville Chamberlain. Putin is handing out ultimatums because he senses weakness in the White House. We must stand with our Eastern European NATO Allies.’

Next week’s conference comes amid growing fears Russia could invade Ukraine, sparking all-out war after Putin has stationed 100,000 troops near the eastern border of the country, where Putin already seized the Crimea region in 2014.

On Sunday Biden spoke with Ukrainian counterpart Volodymyr Zelensky and assured him the U.S. will respond ‘decisively’ if Russia invades.

Ukrainian officials have begged the United States and other Western government for stronger action to deter what they fear is a certain Russian invasion.

Using some of his most direct language yet, Biden said last Friday, ‘I’m not going to negotiate here in public, but we made it clear he cannot — I’ll emphasize, cannot — invade Ukraine.’

The US leader added, in remarks to reporters during a holiday stay in Delaware, that he had ‘made it clear to President Putin that we will have severe sanctions, we will increase our presence in Europe, with NATO allies’ if Russia invades Ukraine.

Biden has threatened harsh sanctions if Putin invades, and the Russian leader reportedly said that new sanctions would lead to a complete breakdown of relations between the two nations.