Despite Premier Daniel Andrews imploring city dwellers to remain in their homes as the state headed into a snap lockdown, some regional communities were still braced for an influx of Melburnians.

Other states clamped their borders shut after the Victorian government announced the reintroduction of restrictions to limit the spread of the Holiday Inn coronavirus cluster. 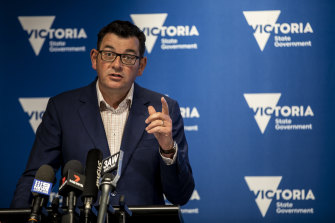 South Australia and Tasmania enforced blanket bans on Victorians entering their states and NSW asked any Victorians crossing its border to observe the same “stay at home” rules that apply to all Victorians.

The announcement of a lockdown came as a blow for many tourism and hospitality businesses who were preparing for a busy weekend to make the most of the last days of summer.

Mr Andrews said people who were not in their principal residence on Friday afternoon were encouraged to stay put. But he urged Melburnians to remain at home rather than rushing to holiday houses before the restrictions came into place at midnight.

“If you don’t need to travel to a beach house or wherever it is between now and midnight please don’t do that,” Mr Andrews said on Friday afternoon.

“All these rules, all this response over such a long period of time has always been about limiting movement wherever we possibly can. So I just ask people to use some common sense.” 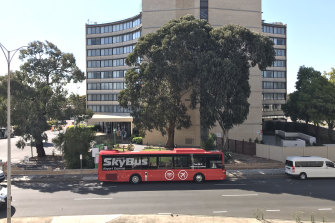 A Skybus outside the Holiday Inn at Melbourne Airport on Wednesday morning.Credit:Joe Armao

But Mr Andrews said this time there will be no “ring of steel” separating Melbourne from regional Victoria.

“I don’t want this thing to go from Melbourne to regional Victoria. If we have rules that are softer, that are easier in regional Victoria, and barely enough time to set up a ring of steel – once you had it up, you’d almost be dismantling it at the same time,” he said.

“It’s five days, it’s not weeks. It’s not a long-term thing. Therefore, it’s appropriate to have the same rules apply across the whole state.”

Bass Coast chief executive Ali Wastie said her council was preparing for a rush of people coming from Melbourne to the coast and Phillip Island.

“I’m sure there will be an influx of people on the island and across the Bass Coast,” she said.

But Ms Wastie said she expected the crowds would be down on the previous lockdown with all businesses across Victoria subject to the same restrictions.

Greater Geelong mayor Stephanie Asher said her council was preparing for the possibility of an influx of people from the city but had not seen any evidence of it during the day.

She said the statewide nature of the lockdown would make it less appealing for Melburnians to rush to regional Victoria where the same restrictions applied to all businesses.

“We’re aware it may happen but I don’t think it will be as significant as perhaps it could have been,” she said.

A Transport Department spokesman said traffic across Melbourne was in line with a regular Friday afternoon.

He called for the reintroduction of the “bubble” that allowed border communities to travel between Victoria and South Australia.

“We have staff based in South Australia who deliver essential services in terms of childcare and a range of other professions,” Mr Burgoyne said. “If this isn’t addressed appropriately we won’t be able to deliver services in some parts of regional Victoria.”

At the NSW border, Business Wodonga president Graham Jenkin said many traders would be hurting after preparing for a busy weekend.

“It will be as much a mental health battle as anything else particularly in hospitality and with Valentine’s Day on Sunday one of the biggest days of the year,” he said.

“Across the border at Albury it’s business as usual. We’re on the edge of where all the restrictions start or finish depending on which direction you’re coming from.”

Melbourne Airport confirmed it was busy on Friday afternoon but that was typical of the end of the week and it was unclear whether passenger numbers were related to the snap lockdown.

MATT BEARD thinks Ebony Salmon’s "raw talent" could see the Lionesses starlet excel on the international stage.  And the Bristol

MATT BEARD thinks Ebony Salmon’s "raw talent" could see the Lionesses starlet excel on the international stage.  And the Bristol