PORTSMOUTH, England (Reuters) – Britain’s Queen Elizabeth joined world leaders including Donald Trump and Angela Merkel to mark the 75th anniversary of D-Day, the largest seaborne invasion in history and a feat that helped bring World War Two to an end. 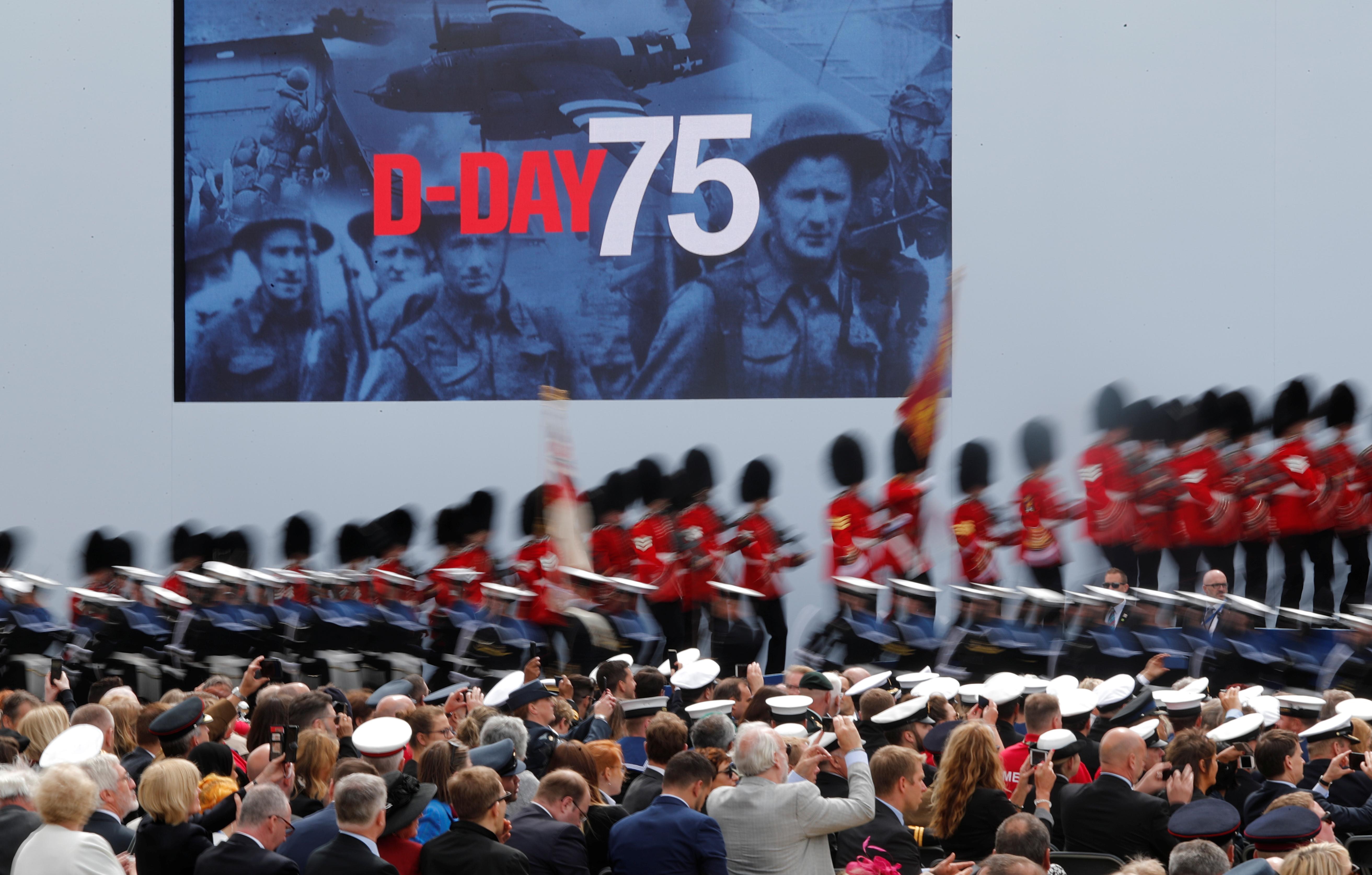 The queen, Prince Charles, presidents and prime ministers rose to applaud veterans, their coats heavy with medals, as they stood on a giant stage beside a guard of honor after a film of the Normandy landings was shown.

“We all had a part to play – I wasn’t nervous – I was apprehensive like everybody else was,” said Bert Edwards, recounting his role 75 years ago as an able seaman on the Royal Navy’s HMS Bellona.

“It’s something that happens once in a lifetime – makes you proud a little bit for taking part,” he said during the film.

Prime Minister Theresa May was joined for the commemorative events in Portsmouth by U.S. President Trump, who is on the final day of a state visit to Britain, and his wife, Melania.

“As we unite to pay tribute to those whose bravery and sacrifice on the beaches of Normandy marked a turning point in the Second World War, we will vow never to forget the debt we owe them,” May said.

“Their solidarity and determination in the defense of our freedom remains a lesson to us all.”

In the early hours of June 6, 1944, more than 150,000 allied troops set off from Portsmouth and the surrounding area to begin the air, sea and land attack on Normandy that ultimately led to the liberation of western Europe from the Nazi regime.

By the time of the Normandy landings, Soviet forces had been fighting Germany in the east for almost three years and Kremlin chief Josef Stalin had urged British Prime Minister Winston Churchill to open a second front as far back as August 1942.

The invasion, codenamed Operation Overlord and commanded by U.S. General Dwight D. Eisenhower, remains the largest amphibious assault in history and involved almost 7,000 ships and landing craft along a 50-mile (80-km) stretch of the French coast.

Shortly after midnight, thousands of paratroopers were dropped. Then came the naval bombardment of German positions overlooking the shore. Then the infantry arrived on the beaches.

Mostly American, British and Canadian men, some just boys, waded ashore as German soldiers tried to kill them with machine guns and artillery. Survivors say the sea was red with blood and the air boiling with the thunder of explosions.

Thousands were killed on both sides. Line upon line of white crosses honor the dead in cemeteries across northern France. Even the codenames of the sectors of the invasion – Utah, Omaha, Gold, Juno and Sword – can draw tears from veterans.

“Seventy-five years ago this Thursday, courageous Americans and British patriots set out from this island toward history’s most important battle,” Trump told a news conference in London on Tuesday.

“They stormed forward out of ships and aeroplanes risking everything to defend our people and to ensure that the United States and Britain would forever remain sovereign and forever remain free.”

Those countries agreed a proclamation to “ensure that the unimaginable horror of these years is never repeated”.

“We will act resolutely, with courage and tenacity, to protect our people against threats to our values and challenges to peace and stability,” the proclamation said.

The commemorations will feature an hour-long performance recounting the story of D-Day and a flypast by historic and military aircraft.

On Wednesday evening, some 300 veterans who took part on D-Day, all now older than 90, will leave Portsmouth on a specially commissioned ship, MV Boudicca, and retrace their 1944 journey across the English Channel, accompanied by Royal Navy vessels and a lone wartime Spitfire fighter plane.

Meanwhile in Normandy, British air assault troops, French army paratroopers and D-Day veterans will recreate the airborne landings. There will be further D-Day memorial events on Thursday in northern France.

Wednesday’s event coincides with the last day of Trump’s state visit to Britain, where he has lavished praise on the U.S. ally and said the wartime bonds forged the “greatest alliance the world has ever known”. 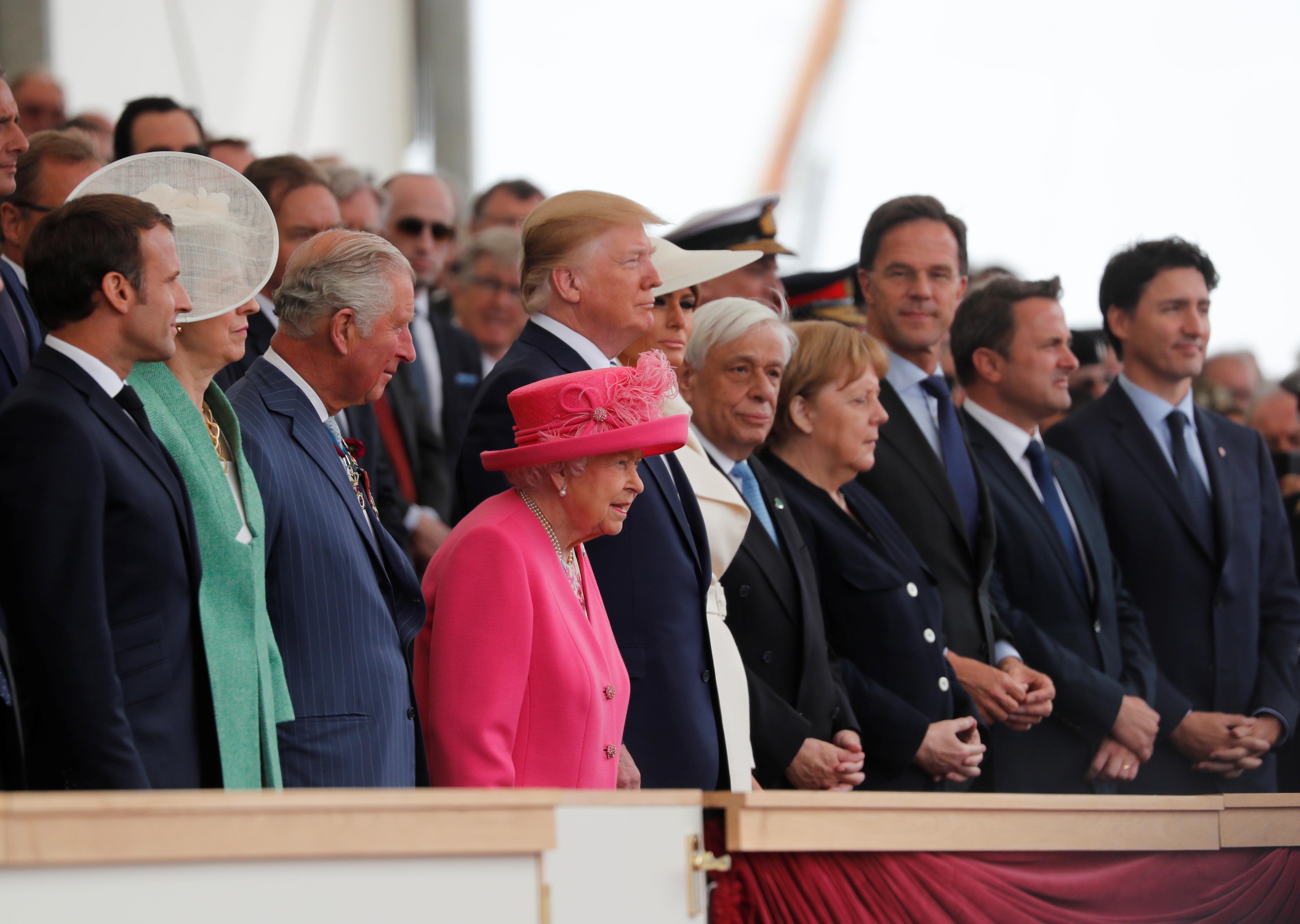 He also called for NATO allies to spend more on defense, saying they had no choice but to meet NATO’s target of at least 2% of GDP. Trump has repeatedly complained that Germany and others are not pulling their weight and need to do more to ease the burden on the United States.

Britain is one of the few NATO members that does meet the target and May said the D-Day events should serve as an important marker for unity for the future.

“As I host leaders from around the world today to mark this significant moment in our shared history, we will together reflect on the continued importance of the western alliance for all our countries’ security and prosperity,” she said.