Britain’s housing boom puts £9,400 on average property: Values rose 5% in September… as experts predict price dip in 2021 but 27% rise over next five years

British house prices have increased by 5 per cent in just one year – but experts say the post-lockdown market boom will fizzle out after a peak in October.

Buyers should cash in on the upcoming market dip, however, as the next five years are set to see house prices rising again across England – with the North West seeing the largest hike of 27.3 per cent.

This year’s hike of 5 per cent – which put an average £9,415 on a property – is the highest seen in four years, mortgage lender Nationwide said on Wednesday, as a sharp rebound in the country’s housing market accelerated.

Countless Britons have rushed to cash in on Rishi Sunak’s stamp duty cuts announced in July – allowing buyers to avoid paying the tax on houses up to £500,000.

Also contributing to the initial housing boom was the nation’s pent-up buyer demand post-lockdown as well as a rush by some buyers for bigger houses outside of urban areas in the new work-from-home age.

Nationwide said about 10 per cent of people it surveyed in September were in the process of moving as a result of the pandemic, rising to 15 per cent in London. 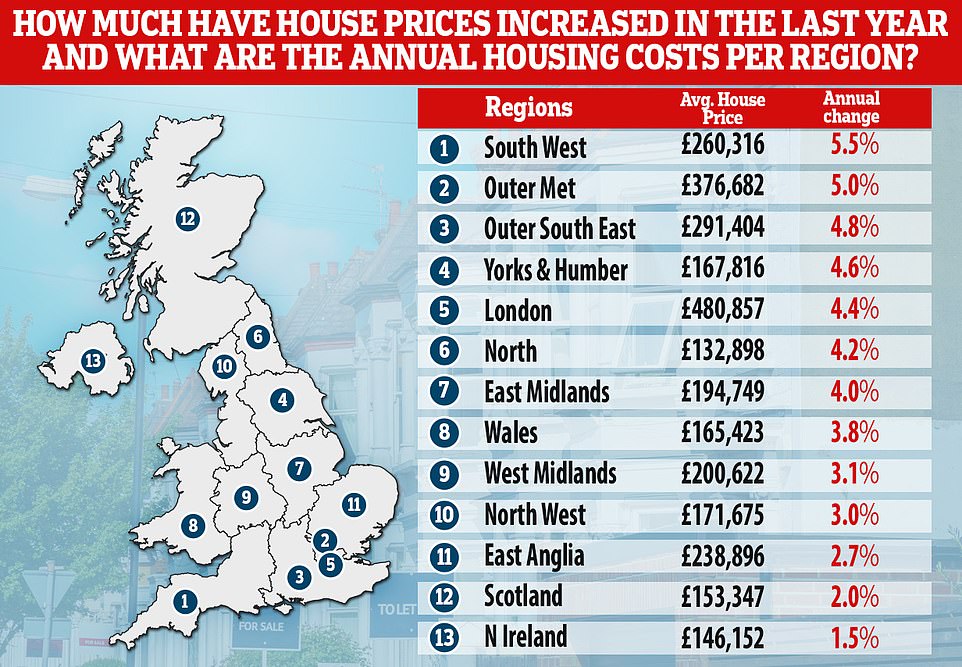 What is the average house price in each UK region?

A further 18 per cent of those asked said they were considering moving due to the pandemic.

But the buzz is set to fade out in the coming months with unemployment expected to rise sharply and Covid-19 cases increasing again.

Online searches for the UK’s main property websites have dropped after their initial surge, with forecasters warning this signals the end of the market upturn.

Google search data suggests showed a drop off in the number of potential buyers visiting the three main property sites.

Analysis by Pantheon Macroeconomics found interest in key phrases, such as ‘Rightmove’, ‘Zoopla’ or ‘On The Market’ slowed from a peak in late August, dropping by seven per cent in September.

‘We expect the official measure of prices to peak in October, to around three per cent above its pre-Covid level in March, and then fall by three per cent over the following 12 months.’

And potential buyers should cash in on the dip while they can, as estate agent Savills predicted that prices across Britain will increase by 4 per cent during 2020, before flattening out across 2021, with no real movement.

Prices are then expected to pick up again, so that over the five-year period starting in 2020 and ending in 2024, prices will grow by around a fifth (20.4 per cent).

Expectations that interest rates will stay lower for considerably longer will underpin the growth, Savills said.

Here are Savills’ new predictions for house price growth over the five years between 2020 and 2024:

Over the five-year period, the regional pattern of price growth is expected to reflect the stage the housing market cycle was at before Covid-19, the report said.

This points to markets further from London being the strongest performers, with price growth expectations for the North West of England at 27.3 per cent and in Scotland at 25.4 per cent, for example.

The average property price in London stands at £480,857 – after the five per cent rise seen in the last year.

Savilles predicts a 12.7 per cent rise in property price in London, putting that average at £541,926 in the next five years.

The 5 per cent increase in property price reported so far was stronger than the median forecast of a 4.5 per cent rise in a Reuters poll of economists – average prices hit a fresh record high.

Nationwide’s chief economist Robert Gardner said: ‘Behavioural shifts may also be boosting activity as people reassess their housing needs and preferences as a result of life in lockdown.’

The mortgage lender said prices rose by 0.9 per cent in September from August compared with a forecast of a 0.5 per cent increase in the Reuters poll.

Property prices were 5.2 per cent higher than the same month a year earlier and property values were up by 1.6 per cent month on month.

It follows reports that more than one million houses will sell by the end of the year. 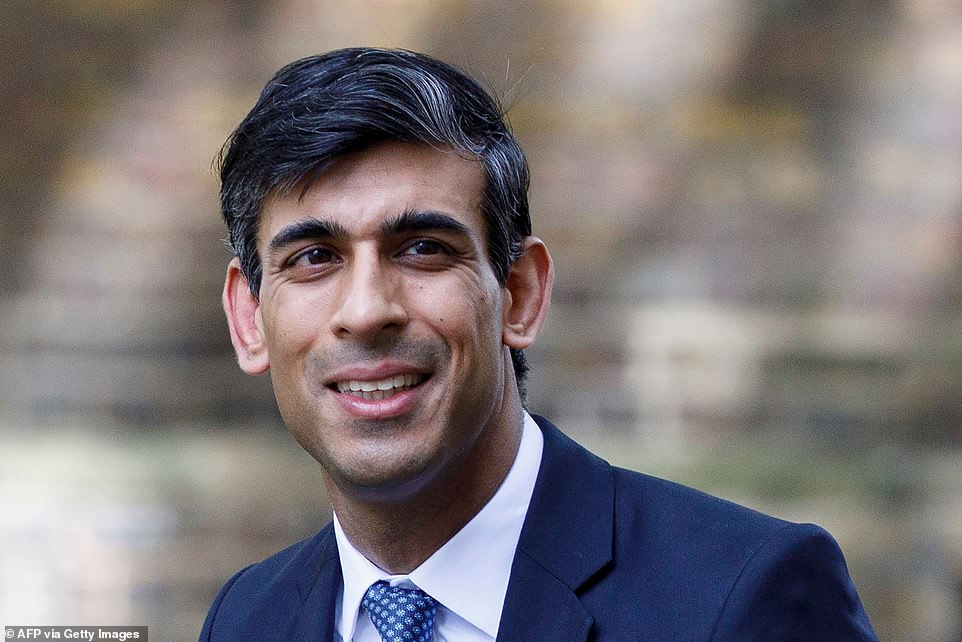 Countless Britons have rushed to cash in on Rishi Sunak ‘s stamp duty cuts announced in July – allowing buyers to avoid paying the tax on houses up to £500,000 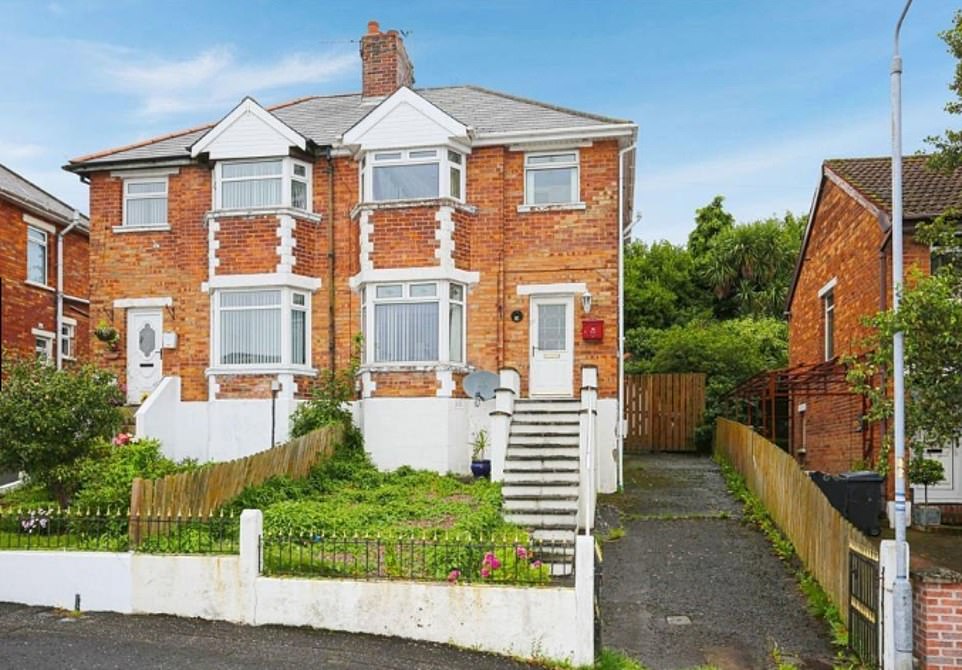 In Belfast, this three-bedroom semi-detached house is on the market for £100,000. Northern Ireland’s average house price is £146,152 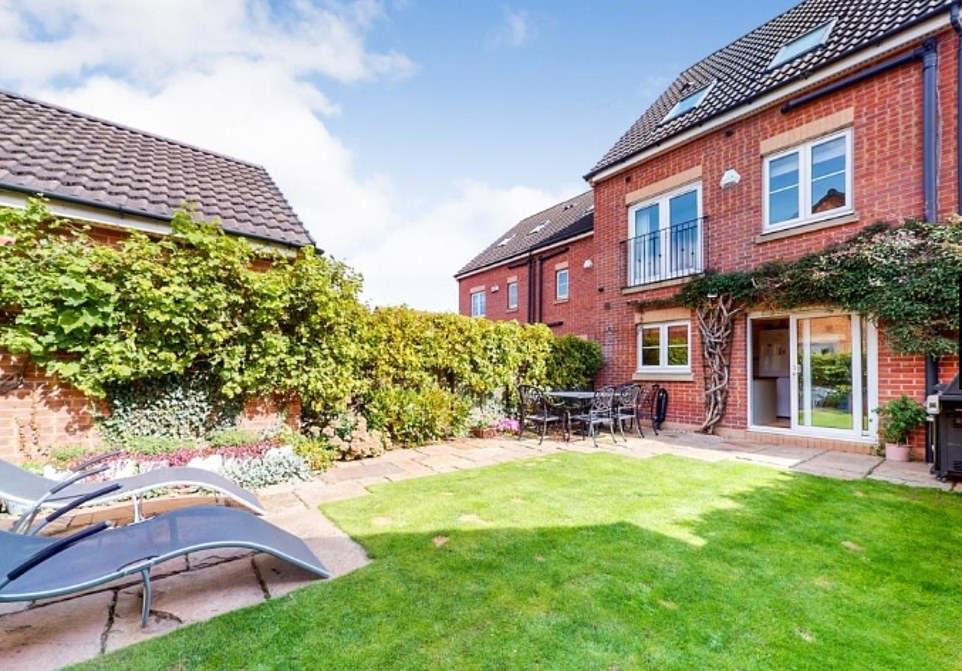 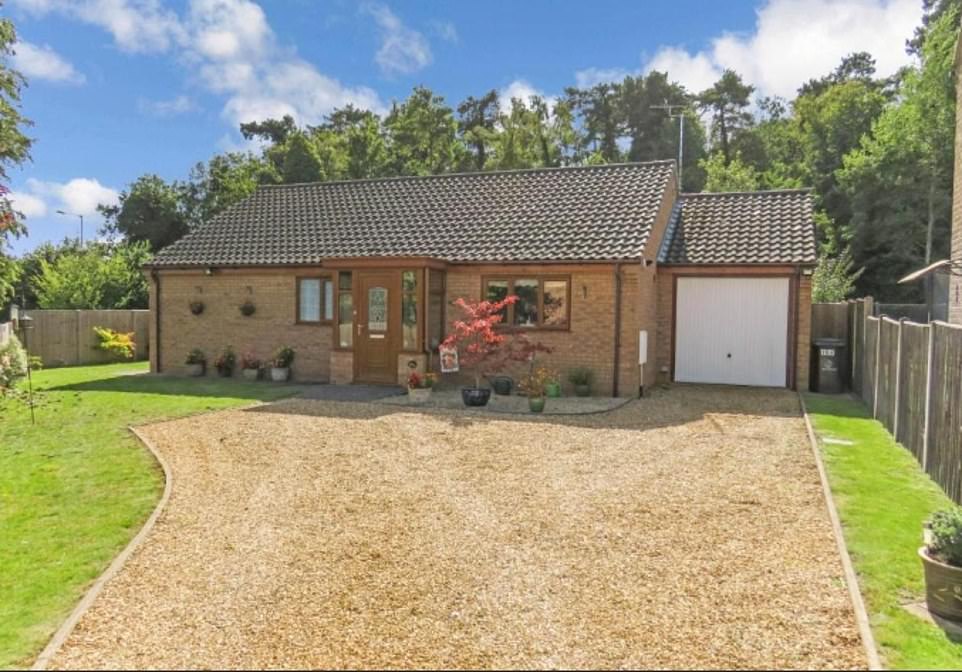 This two-bedroom detached bungalow is on the market for £240,000 in Mundford. The average house price in East Anglia is £238,896 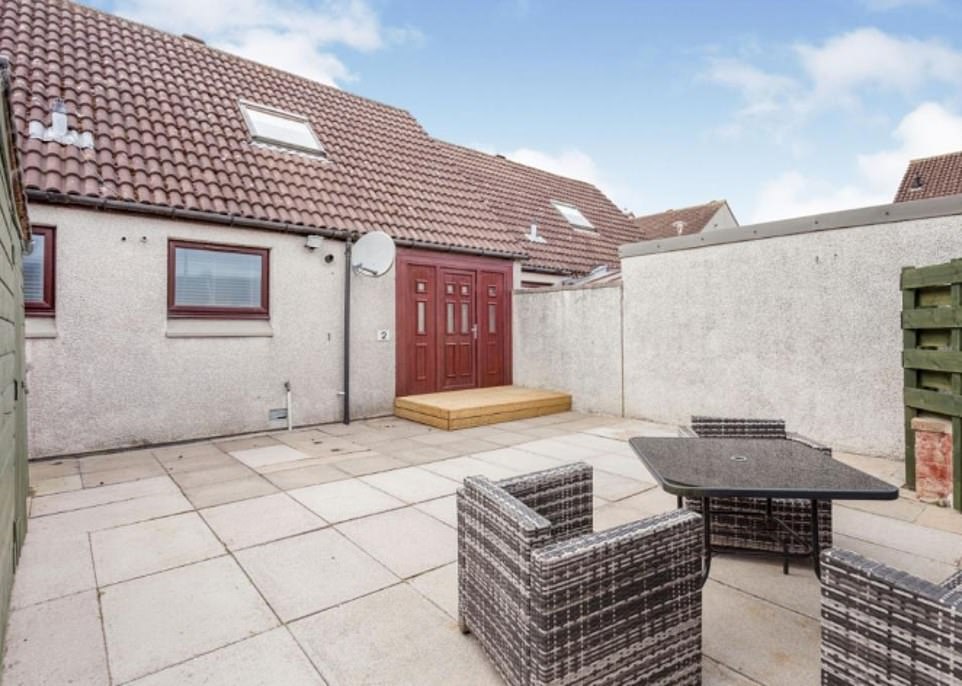 This two-bedroom terraced house in Sheddocksley, Aberdeen, is on the market for £150,000. A 25.4 per cent increase in five years would make this property worth £188,100 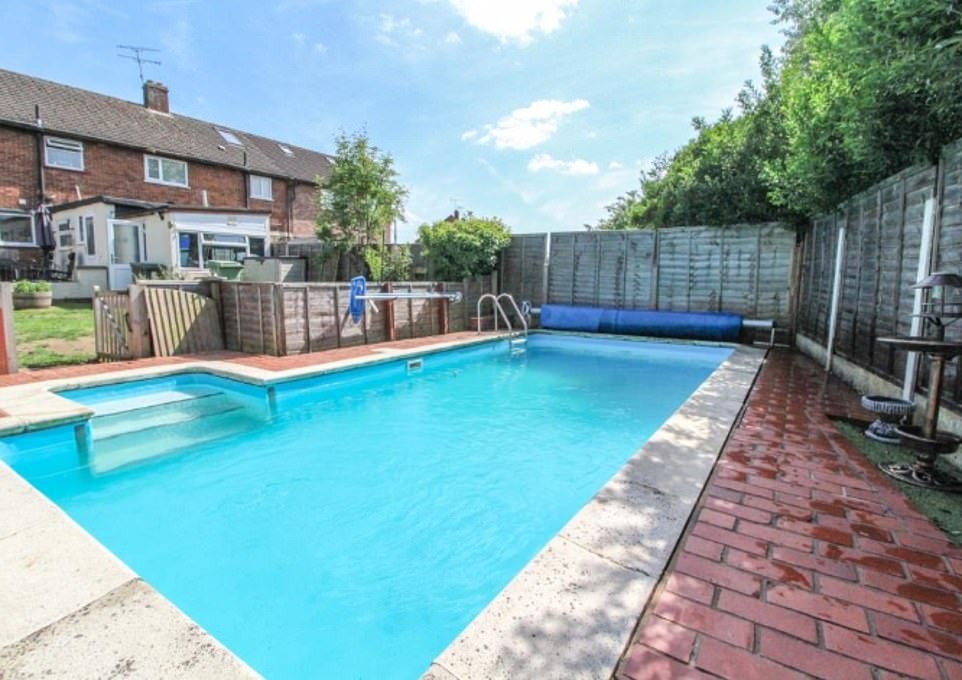 Savills said it expects around 1.06 million house sales across Britain in 2020 – with the market favouring established home owners and cash buyers.

Furthermore the number of mortgage approvals jumped to its highest levels since 2007 in August, the Bank of England said.

Some 84,700 approvals for house purchase were recorded, marking the highest number since October 2007, according to the Bank’s money and credit report.

The 1.06 million predicted house sales figure is around a quarter of a million more than it had previously predicted – prior to the Chancellor’s temporary stamp duty holiday.

The holiday applies to England and Northern Ireland and raises the ‘nil rate’ band of stamp duty to £500,000 until March 31.

Similar measures have taken place in Scotland and Wales, which have different property taxes.

Savills had originally forecast 775,000 sales this year, but revised its prediction in the light of the ‘mini boom’ – and noted that constraints on new borrowers mean conditions favour those with equity, creating a market dominated by mortgaged home movers and cash buyers.

Against a backdrop of job loss announcements across several industries, lenders have pulled many low-deposit mortgages in recent months as this is seen as riskier lending. 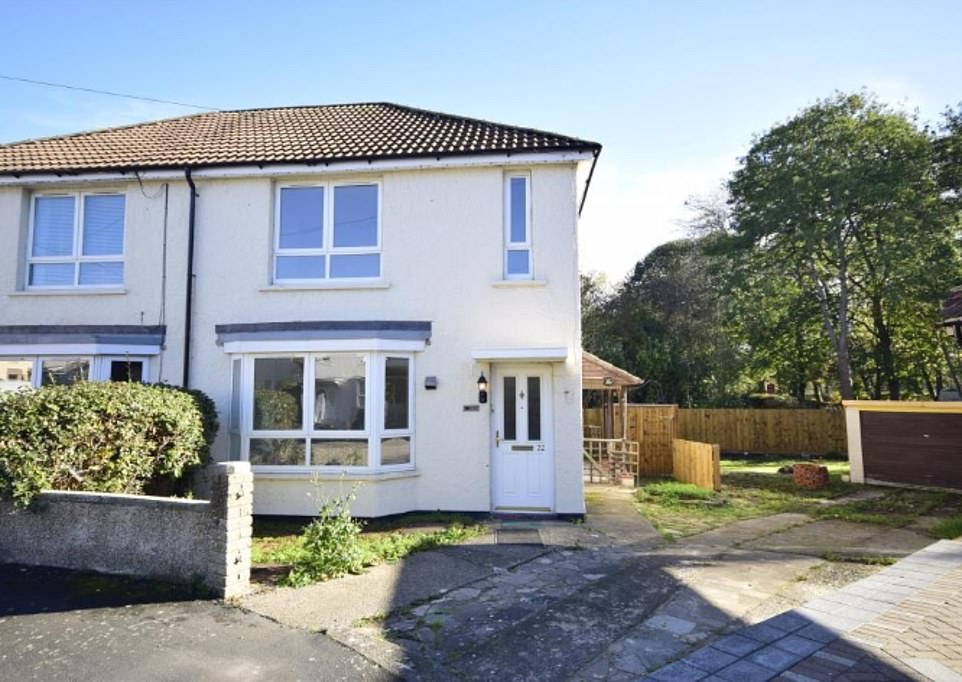 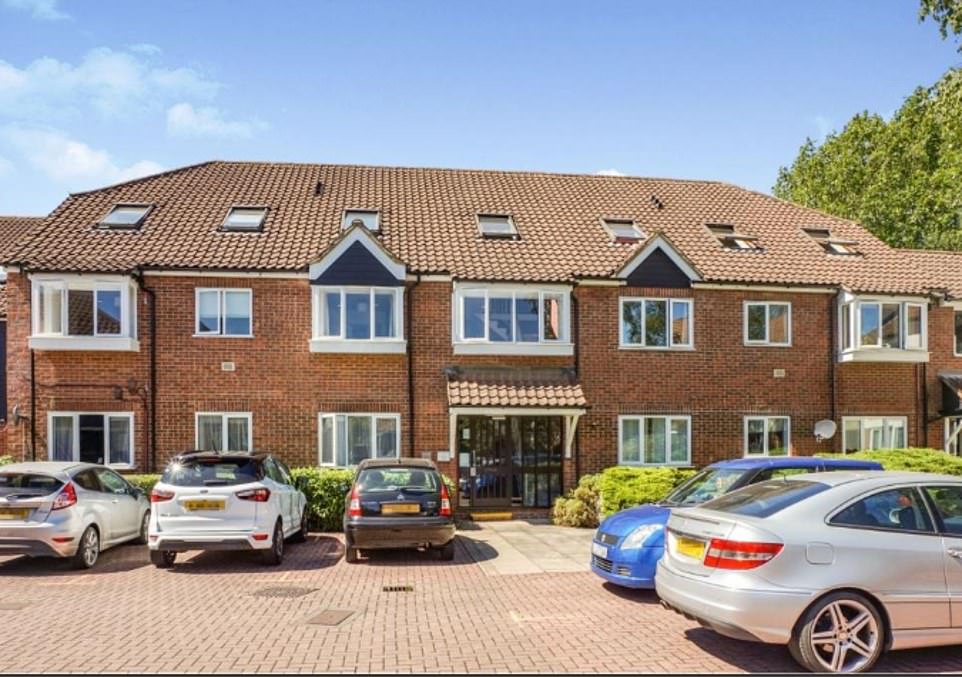 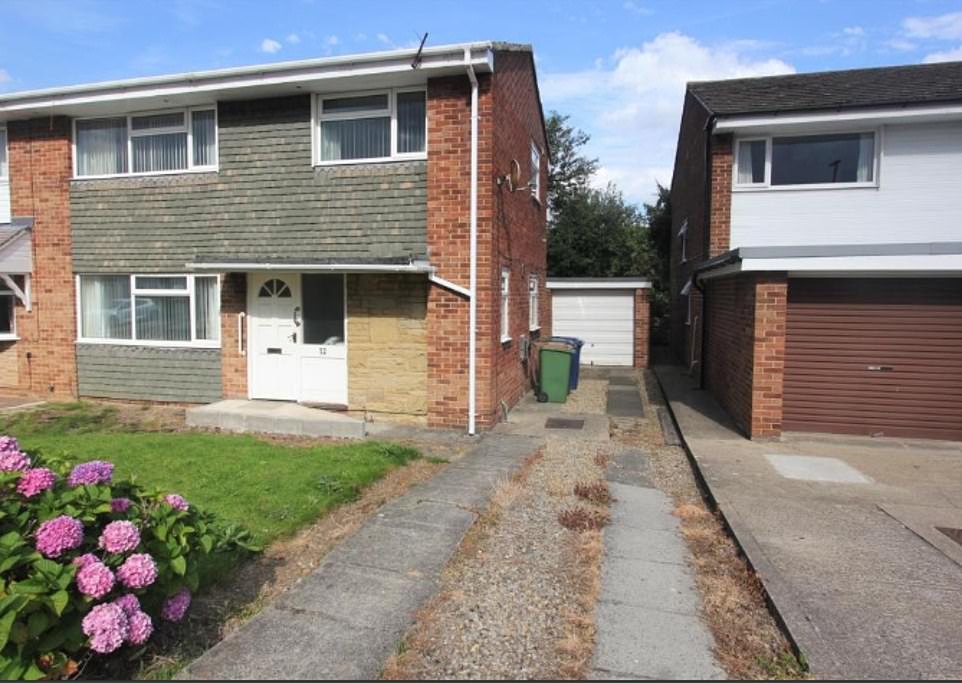 This three-bedroom property in Guisborough, North Yorkshire, is on the market for £160,000. The average house price in the region is £167,816

But even so, the number of mortgage approvals made to home buyers jumped to its highest levels since 2007 in August, the Bank of England said.

Some 84,700 approvals for house purchase were recorded, marking the highest number since October 2007, according to the Bank’s money and credit report.

The Bank said the jump only partially offsets weakness seen between March and June.

Lucian Cook, Savills’ head of residential research, said: ‘While we clearly can’t ignore the economic backdrop, other factors, including a stamp duty holiday, have unleashed an unexpected wave of activity in the market and added to the pent-up demand coming out of lockdown.

‘Many people are reassessing their work-life balance, seeking a change of location or a trade up the ladder. The unexpected stamp duty holiday has given a further boost to the market, particularly in higher value locations through the commuter zone and lifestyle relocation hotspots.

‘The end of that stamp duty holiday and a projected rise in unemployment are expected to cause the market to slow in 2021, with the very real prospect of price falls at points during the year, hence our forecast of zero annual growth.

‘But from a mortgage affordability perspective, a fall in the income growth forecast has been outweighed by the expectation of a continuation of ultra-low interest rates over our forecast period as a whole. That provides more capacity for house price growth over the medium term, tempered by the impact on loan-to-income ratios and mortgage deposit requirements.’

NAEA (National Association of Estate Agents) Propertymark reported this week that about one in eight homes sold in August went for more than the original asking price – marking the highest proportion in nearly five years.

Looking to the months ahead, economist Mr Tombs said a recent increase in mortgage rates, particularly for low deposit loans, ‘will make purchases unaffordable for many first-time buyers’.

He continued: ‘The outlook for a further drop in employment also will weigh on the housing market, though with home ownership having narrowed to a wealthier segment of the population over the last decade, job losses won’t have as devastating an impact on the market as they did in 2008.’

The report also showed that interest rates on overdrafts jumped in August.

The ‘effective’ rate – the actual interest rate paid – on interest-charging overdrafts rose by 4.2 percentage points to 19 per cent in August.

This is the highest rate since similar records started in 2016 and compares to a rate of 10.32 per cent in March 2020, before new rules on overdraft pricing came into effect.

Under the new Financial Conduct Authority (FCA) rules, overdraft providers have to charge one single rate of interest rather than adding on other charges.

Before the coronavirus pandemic, many providers announced new rates which were around double what many people with an authorised overdraft had previously been on.

The FCA has introduced guidance for firms to help overdraft customers who have been facing temporary financial difficulties due to the coronavirus pandemic. As part of this, borrowers have been offered a temporary £500 interest-free overdraft buffer.

The report also said typical rates on new personal loans increased a little in August, to 4.71 per cent.

The typical cost of credit card borrowing was broadly unchanged at 17.95 per cent in August.

Households’ deposits increased by £5.2 billion in August. That was lower than the increase of £6.5 billion in July and below the average of £17.2 billion between March and June.

The returns savers were getting tumbled further in August. The effective interest rate on new deposits fell to a new low of 0.50 per cent, the Bank said.

Mr Tombs said the Bank’s report seems to reflect households returning to spending most of their income, following a period of ‘enforced’ saving during the full lockdown in the second quarter of 2020.

He added: ‘High unemployment, however, likely will prompt households to maintain a large savings buffer over the next year, ensuring that spending does not exceed households’ diminished incomes over the coming quarters.’

Alistair McQueen, head of savings and retirement at Aviva, said: ‘A large proportion of households are likely to shift to precautionary saving in anticipation of further economic turmoil caused by the reintroduction of stricter local lockdown measures.

‘This will dent consumer spending, which will curb the UK’s economic recovery.’