London: British police and coast guard units responded on Sunday to an incident on an oil tanker in the English Channel after the crew reported they had stowaways onboard who had become verbally abusive.

The incident, which began about 10am on the Libyan-registered tanker Nave Andromeda, was continuing Sunday evening, local time. The coast guard scrambled two helicopters to the scene, and authorities imposed a five-kilometre exclusion zone around the vessel. 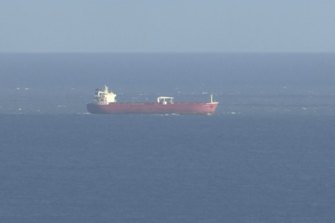 British police are investigating an undisclosed incident aboard an oil tanker in the English Channel. Credit:Sky News via AP

“Police are currently working closely with our partners, including the Maritime & Coastguard Agency and Border Force, to bring this incident to a safe conclusion,'' the Hampshire police said in a statement.

Pat Adamson, a spokesman for the ship's owner, Navios Maritime Acquisition Corporation, described the situation as a “security incident" involving stowaways and said the tanker was not hijacked.

The Nave Andromeda left Lagos, Nigeria, on October 6 and had been expected to dock in Southampton, England, at 10.30am on Sunday, according to ship tracking website MarineTraffic.com. The tanker has been circling an area about 8 kilometres south-east of Sandown on the Isle of Wight since about 10am, tracking data shows.

Chris Parry, a retired Royal Navy rear admiral who is now a fellow at the Royal United Services Institute, said he suspects the stowaways grew violent as the tanker neared port, and the crew retreated to a secure area known as “the citadel" to retain control of the vessel.

The captain probably wanted to avoid taking a fully loaded tanker into the heavily populated area near the Portsmouth navy base, where Britain's carriers are based, as long as this incident was going on, Parry said.

“You don’t want this ship anywhere near with this sort of thing going on," he said. “And so the captain probably rather wisely and in consultation with his owners, went to anchor off the Isle of Wight.”

Bob Seely, who represents the Isle of Wight in Parliament, said the British government was likely to convene a meeting of its emergency committee to discuss the incident. Trouble on the ship is of particular concern because of the tanker's cargo and because the vessel started out from West Africa, he said.

“I suspect, because of the nature of this, it will be treated as marine counter-terrorism," Seely told Sky News. “The number of people in the UK who do that are very limited, and the relevant units will be looking at options, no doubt, as to what we could be doing.”

The Home Office, which is responsible for law enforcement and immigration in the UK, said it was aware of the incident.

Parry said that such stowaway incidents are not infrequent and are likely to increase as migrants look for new ways to enter Britain.

“I think the most important thing to take away from this is that we have a world that’s on the move, and the sea is the physical equivalent to the World Wide Web," he said. “And people will find out how to get between countries by sea, by any other route that gets them from one place to another, where they can obviously advance themselves economically, improve their lives and get away from whatever horrors or disadvantages that they were born into."