No longer the Covid pariah: Britons are set to be most popular holidaymakers in Europe this summer thanks to UK’s vaccination programme (but only if Boris let’s us leave)

Britons are set to be the most popular holidaymakers in Europe this summer thanks to the UK’s vaccination drive — but only if they are allowed to travel.

The UK started 2021 as the continent’s Covid pariah, with coronavirus infections and death levels soaring above its European neighbours.

But now as the country storms ahead of rivals with the vaccine rollout — with all adults now expected to have received their first jab by early June — Brits could be courted by struggling tourism agencies and boards across Europe.

A boost in supply of the vaccine means all adults could be vaccinated a month before the Government’s original July goal and two months ahead of the EU.

Brits are expected to be allowed to travel again from May 17, when Boris Johnson’s third stage of his lockdown exit plan is set to come into force. 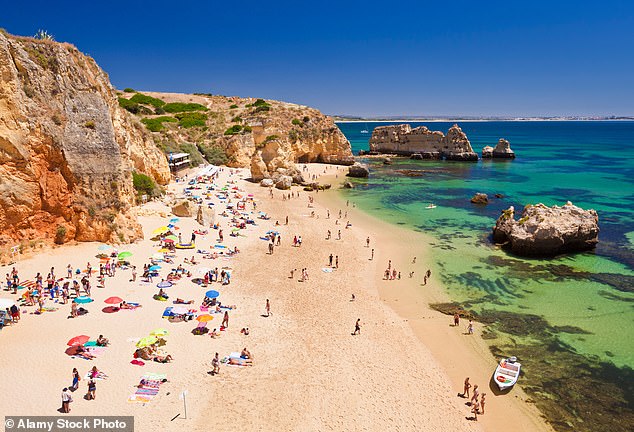 Britons are set to be the most popular holidaymakers in Europe this summer thanks to the UK’s vaccination drive. Pictured: Holidaymakers sunbathing on Praia da Dona Ana in Portugal

Turkish tourism bosses this morning announced they would welcome in Brits this summer if they have been given a vaccination.

It came as it emerged that Transport Secretary Grant Shapps is set to take Portugal off of the travel ban ‘red list’, paving the way for summer holidays there.

Sunny Spanish holidays could also soon be allowed as the country’s tourism minister revealed this week that a vaccine passport system was set to come into force.

And Greece also announced plans to reopen to holidaymakers from mid-May and Cyprus said it would welcome fully-vaccinated Britons from May 1.

The UK’s largest tourism firm TUI announced a 500 per cent rise in bookings the day the Prime Minister announced May 17 as the date for which Brits would be allowed to travel abroad without isolating on their return. 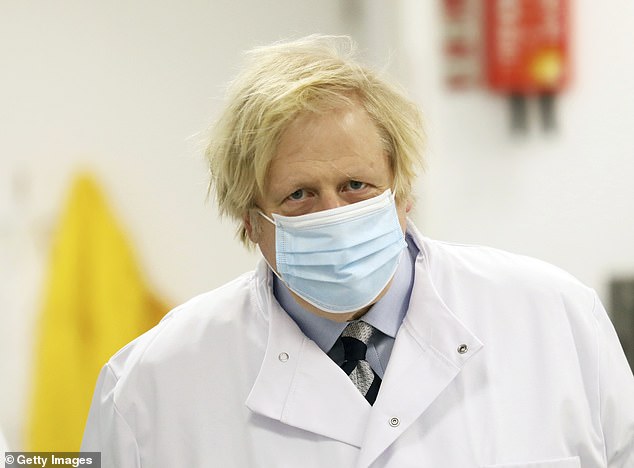 Brits are expected to be allowed to travel again from May 17, when Boris Johnson’s (pictured in Belfast on Friday during a visit to the Wellcome-Wolfson Institute For Experimental Medicine at Queen’s University) third stage of his lockdown exit plan is set to come into force

And Thomas Cook saw a rise of 25 per cent in enquiries about Cyprus after the country said it would welcome vaccinated Brits even earlier.

President of tourism body VisitPortugal Luis Araujo told CNN it was not too early for Brits to start booking their holidays.

He said: ‘They should book immediately. We need to build trust with tour operators and travel agents.

‘If we don’t have this proactive reaction in terms of booking or asking for travel, then everything will take longer to recover. What we need now is mobility.

‘And we need it now because each day that passes is a day we lose.’

Mr Araujo was keen to point out that Portugal’s rapidly falling infection rate and ‘clean and safe’ stamp system of hotels, bars, restaurants and museums comply with health regulations mean the country will be able to welcome tourists back imminently.

Transport Secretary Grant Shapps will take Portugal off the list of 33 Covid-hotspot countries on Monday, it is understood.

It means the ban on direct flights into the UK will be lifted and arrivals from Portugal will not have to go into quarantine at hotels for 11 days upon landing.

The country has already said it aims to reopen to Britons who can show proof of vaccination or a negative test from mid-May. 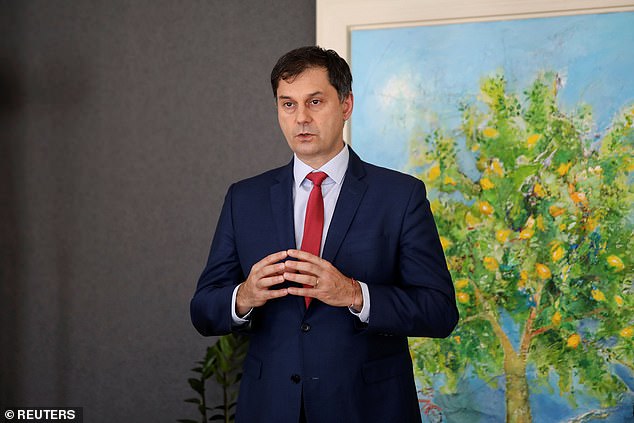 Greek tourism minister Harry Theocharis said the country would be open on May 14 to international tourists who are vaccinated, have antibodies or can show proof of a negative Covid test

Portugal was placed on Britain’s red list due to its historic links with Brazil, where a feared new strain of Covid was discovered.

However, Britons will be unable to go there for holidays until at least May 17 – the earliest international travel can get underway under the Government’s official roadmap for lifting lockdown.

On Tuesday, Greek tourism minister Harry Theocharis said the country would be open on May 14 to international tourists who are vaccinated, have antibodies or can show proof of a negative Covid test.

Addressing the ITB Berlin trade show, Mr Theocharis said: ‘Our only ambition is to ensure Greece is open to allow anybody who wishes to visit to be able to do so.’

He added that all holidaymakers will be subject to random testing. 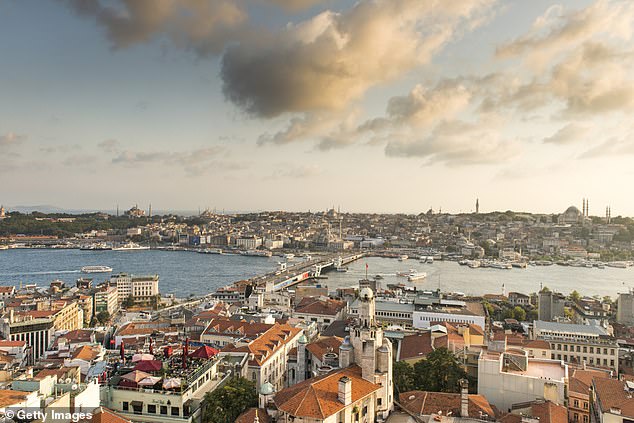 Revealing Turkey’s relaxation measures, a source told The Sun: ‘Turkey is ready and willing to let the British come in as soon as possible, and as safe as possible’

It is thought tourists will be able to enter restriction-free after their first jab and children will need to arrive with a negative test. But the final details are still being sorted.

The Cypriot deputy tourism minister Savvas Perdios said on Thursday: ‘We have informed the British government that from May 1 we will facilitate the arrival of British nationals who have been vaccinated … so they can visit Cyprus without a negative test or needing to quarantine.’

Holidays back on: Spain set to launch vaccine passports

Sunny Spanish holidays could be back on for Britons within weeks as the tourism minister revealed a vaccine passport system was planned for the middle of May.

It comes after Greece announced plans to reopen to holidaymakers from mid-May and Cyprus said it would welcome fully-vaccinated Britons from May 1.

But those hoping to jet off for the Early May bank holiday are set to be barred by UK authorities because Boris Johnson has said he won’t allow overseas leisure travel until at least May 17.

Spain’s tourism minister Reyes Maroto told a radio station on Wednesday: ‘We could be in a position to start implementing the digital passport (when the tourism fair FITUR starts on May 19).’

Under the Government’s roadmap for England, this would mean that holidaymakers could fly freely to Spain – providing they had their jabs and the country hadn’t be added to the dreaded ‘red list’ from which entry to the UK is banned over Covid variant fears.

However, Transport Secretary Grant Shapps did sound a note of caution on Wednesday, saying there was no cast iron guarantee that holidays abroad may be allowed from May 17.

Millions of Britons visit Spain, Greece and Cyprus each year to escape to sunny beaches and their tourism industries, ravaged by Covid, rely heavily on British support.

In a single summer month, nearly 10 million Britons can land in Spain, and Brits provide more tourists than any other country.

And in Cyprus, more than a million Britons visit each year – more than from any other country – and the tourism industry accounts for 13 per cent of the Cypriot economy.

Arrivals and earnings from the sector plunged on average 85 per cent last year.

It comes amid discussions around EU Covid certificates intended to free up travel in the continent.

Draft documents indicated that any certificate must prevent discrimination against those not vaccinated by including information on whether people have been tested or have recovered.

The European Commission is expected to release its final proposal for Covid ‘green digital certificates’ next week, with southern countries reliant on tourism hoping they will open up this year’s summer season.

But they ran into opposition from countries including Germany and Belgium, which said vaccination is neither obligatory nor currently available to all those willing to accept it.

While the proposal aims to ‘facilitate free movement’ during the pandemic, it says any proof of vaccination must not discriminate against those who refuse the shot or cannot get inoculated.

It remained unclear how this would work in practice, as member states would still need to decide how people who did not have evidence of vaccination would be treated if they wished to cross frontiers.

The draft also leaves it up to the 27 member states to make a call on waiving travel restrictions only for those vaccinated with shots authorized for the whole bloc by the European Medicines Agency (EMA), or also for people who received jabs allowed unilaterally by specific countries.

Hungary and Slovakia have already bought the Russian Sputnik vaccine despite it not being authorised by the EMA.

The agency has recommended four Western vaccines for use so far.

With competing goals for the proposed Covid certificates, EU leaders – much criticised for a slow vaccination roll-out – are expected to have a heated discussion on the proposal later this month.