Peak tourism bodies say flagship stimulus programs from state and federal governments have been ill-conceived and continue to fail Melbourne in its time of greatest need.

Hotels are still barely half full more than a month into the Andrews government’s belated Melbourne travel voucher scheme which offers $200 to help cover the costs of city accommodation, attractions or tours.

The first public data from the Commonwealth’s half-priced airfares program also showed it was offering little meaningful sustenance for Melbourne tourism. The closest destination on the 17-strong list, Avalon Airport, has received about 3 per cent (20,000) of the 663,000 tickets already sold. 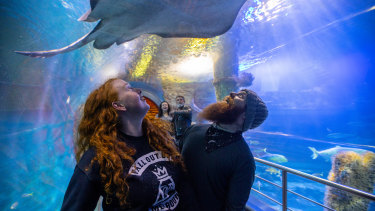 In contrast, nearly 200,000 tickets have been sold to the Gold Coast, long a domestic hot spot during chilly southern winters. Adelaide was next with 160,000, followed by Hobart with 80,000.

“The fact we were left off the half-price list really leaves Melbourne and Sydney just shaking their heads and saying ‘how can this be’?” chief executive of the Victorian Tourism Industry Council Felicia Mariani said.

Melbourne was also excluded by the state government in the first two rounds of travel vouchers and, for the first time, tourism spending in regional areas has eclipsed the city.

Ms Mariani said the inclusion of Melbourne in the third round of vouchers, which sold out its 40,000 allocation in minutes, had helped ailing city operators.

But she said the scheme would have offered better value if it had mandated Monday to Thursday travel instead of allowing people to book on weekends, when hotels and attractions were already making ends meet.

Calling for another round of vouchers, Ms Mariani pointed to various programs in South Australia, which have both incentivised weekday stays and opened eligibility to people living interstate.

“If we revisit something for Melbourne, we need to understand that the requirements go beyond getting people from Victoria into the city. We need to think about how we’re encouraging interstate visitors back as well,” she said.

The average hotel occupancy rate in Adelaide to the end of March was 72 per cent compared to Melbourne’s 43.5 per cent.

More than a month since the beginning of the latest voucher scheme’s eligible travel period, Melbourne’s average occupancy figure had crept up to 54 per cent, Accommodation Association chief executive Dean Long said.

He added hotel quarantine occupancy meant the true figure of money-spending visitors was somewhere in the 30s.

“The biggest issue [for operators] is it’s really tough to hold staff because we can’t offer the hours five, six or seven days a week. We have a major staff shortage, which doesn’t allow you then to flex up when you need to.”

He supported another voucher scheme that would encourage midweek travel to Melbourne. He said an even better way to get people into the city was to emulate the FOMO campaign, which has been driven by the City of Melbourne.

Part of that campaign supported individual businesses to offer specific enticements like an extra night’s stay, champagne on arrival or free parking.

“There’s no reason why he couldn’t take that same philosophy and try and drive interstate visitation to Melbourne,” he said.

Asked about the Commonwealth’s half-price airfare scheme, Mr Long said it was “completely the wrong program for the wrong time for the wrong destinations”.

“I’m sure tickets are selling,” he said.

“But those destinations they picked, particularly the initial 13 destinations, were already at an average of 80 and 85 per cent of 2019 levels. They didn’t need help.”

He said the breakdown of Melbourne accommodation spend during normal times was roughly 40 per cent international, 40 per cent corporate and 20 per cent leisure.

Sarah Noonan and partner Alister Winkel, who travelled from Traralgon on Thursday to celebrate Ms Noonan’s 26th birthday, said events that explicitly gave back to communities most impacted by the city’s lockdown would attract people like them into Melbourne more often.

Ms Noonan suggested a music festival staged in a street or business district particularly damaged by last year’s lockdowns. If the show would generate local business and also donate a proportion of profits to people most affected, she would make a special trip from Traralgon, she said.

“I think that’s touching on something huge,” Mr Winkel said. “People knowing their time and investment in an experience was also going to help a local or regional group of people and not go to an overseas owner.”