The remaining students at Colmont School in Kilmore will be forced to leave the school within days after voluntary administrators failed to secure an emergency bailout from the government and could not secure rent relief from the school’s landlords.

Administrators for Colmont, an independent school that was heavily reliant on fees from international students, had been appealing to the school’s landlords, Taiwanese-born businessman Chien-Long Tai and his wife, Yuyu Chen, for rent relief. 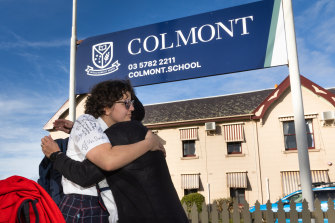 The school collapsed last week due to a lack of funds, leaving hundreds of students in years 3 to 10 with just two days to find a new school. Students in years 11 and 12 were told the school would remain open to them for a longer period so they could continue their international baccalaureate studies without the disruption of having to find a new school at short notice.

Paul Langdon, an administrator at Vince & Associates, said the school “is running out of funds and in the absence of any significant financial support, cannot continue to operate for much longer”.

“The administrators have explored funding options with the federal and state governments on several occasions. Unfortunately, both governments will not be providing additional funding to the school,” he said.

“In addition, the administrators had sought a rent relief release from the landlord, which has also not been forthcoming.”

Dozens of students protested in front of the school gates on Monday, supported by family members, chanting “save our school” and “we want justice”. Members of Victoria Police attended the protest, warning the group to stay off school property.

More than 30 independent and Catholic schools have offered places to students at the school, although most lacked the capacity to take more than a handful.

Victorian Education Minister Natalie Hutchins said there was capacity in the state system to integrate any Colmont student who needs a new school.

“Certainly, there are enough spots at our neighbouring schools to be able to integrate these kids and keep them in the education system,” she said.

Colmont was the only school in the region that taught students the international baccalaureate, a program that provides an internationally accepted qualification for getting into universities. Others include Ivanhoe Grammar and state schools Werribee Secondary College and Brighton Secondary College.

Colmont primary school teacher Sandi Macnamara said staff, who were given letters of termination on Monday, were angry that they had no hint the school was about to fold.

“We’ve been told that we were in a growth corridor and looking for a new site to last 100 years,” she said. “It’s absolutely traumatic to have to say goodbye to our kids.”