Authorities in Italy are investigating whether the Italian mafia is redirecting the country’s supply of coronavirus vaccines away from those who need it most and giving it to their friends and family, according to a report.

Deaths among the elderly have increased in the country, which has struggled in its vaccine rollout, and the prime minister has blamed the rise for younger people jumping the line.

By the end of January around seven out of every 10 people who received the vaccine in Italy were under 60 years old and at least 1,000 alleged line jumpers were under investigation across the country, according to Politico.

“With what conscience does someone jump the queue, knowing that it leaves another person vulnerable, who is more than 65 years old or is fragile, and who has a concrete risk of death?” Prime Minister Mario Draghi said at a news conference.

An estimated 8,000 lives could have been saved in Italy if more elderly people had been able to get the vaccine, an international think tank found, according to Politico. 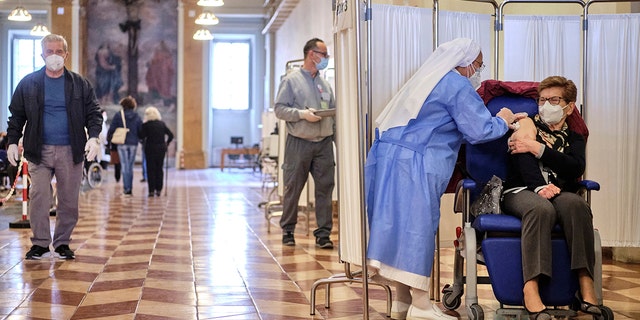 A health worker administers a dose of the Pfizer vaccine to a woman at the San Giovanni Addolorata hospital, in Rome, Saturday, April 10, 2021. (Associated Press)

The mafia often exerts control over health care in the country especially in the south, Politico reported, where the number of people calling themselves health care workers has grown exponentially as the group is among the first to be vaccinated, causing suspicion.

Several regions in the south have reportedly given as many shots to well-connected people like judges, politicians and journalists as people over 80.

“People are being vaccinated who are outside of any priority category specified by the government, particularly in some regions where there is high density of mafia, and we suspect that the mafia is managing the vaccinations,” Mario Giarrusso, a member of the country’s anti-mafia commission, told Politico.