Rome: Italian Prime Minister Giuseppe Conte has handed in his resignation to the head of state, hoping he will be given an opportunity to put together a new coalition and rebuild his parliamentary majority.

The deepening political crisis is playing out against the backdrop of the coronavirus pandemic, which has killed more than 85,000 Italians – the second highest death toll in Europe after Britain and the sixth highest in the world. 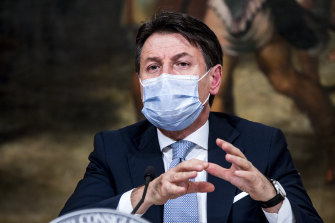 Italian Prime Minister Giuseppe Conte has handed in his resignation.Credit:AP

Conte lost his absolute majority in the upper house Senate last week when a junior partner, the Italia Viva party headed by former premier Matteo Renzi, quit in a row over the government’s handling of the coronavirus crisis and economic recession.

Efforts to lure centrist and independent senators into the coalition to fill the hole left by Renzi have met little success, leaving Conte no choice but to resign on Tuesday, local time, and open a formal government crisis that will give him more time to find a deal.

President Sergio Mattarella will start a rapid round of consultations with party leaders on Wednesday afternoon to test the political waters, his office said.

If he thinks Conte can secure the necessary backing to pull together a new administration, the President will likely give him a few days to try to finalise a deal and draw up a new cabinet.

Financial markets edged higher despite the latest political tumult, with investors hopeful that Conte might eventually emerge with a more stable government.

Until now the main coalition parties – the anti-establishment 5-Star Movement and centre-left Democratic Party (PD) – have backed Conte’s efforts to stay in power.

“Conte is the essential element and we need to broaden and relaunch the government’s action,” Debora Serracchiani, the deputy head of the PD, told state broadcaster RAI. 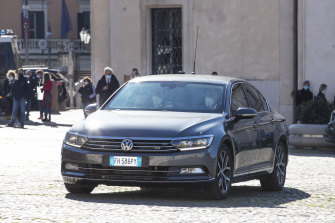 Giuseppe Conte arrives at Rome’s Quirinale Presidential Palace to hand in his resignation.Credit:AP

However, if Conte cannot find new allies, Mattarella will have to come up with an alternative candidate deemed capable of piecing together a workable coalition.

If all else fails, the President will have to call an election, two years ahead of schedule, although political analysts say this is the least likely scenario.

Italy’s coronavirus crisis has triggered its worst recession since World War II and the government has been struggling to draw up a plan on how best to spend some €200 billion ($315 billion) of European Union funds to help the economy recover.

Renzi has accused Conte of lacking a strategic vision, saying he risked squandering the unprecedented EU bonanza on hand-outs rather than long-term investments.

Conte is a lawyer with no direct political affiliation, but is close to 5-Star, the largest party in parliament.

He first came to power in 2018 after 5-Star formed an unexpected coalition with the far-right League. When that pact unravelled a year later, he stayed on as head of a new administration involving the 5-Star and leftist parties.

Opinion polls show that Conte is Italy’s most popular leader, with an approval rating of 56 per cent, almost 20 points above the next closest politician, according to a poll published by Corriere della Sera daily on Saturday.

If he is ousted from office, political sources have suggested he might try to cash in his popularity by forming his own party or else by taking charge of 5-Star.