Sharp work: Contents of Elizabethan country house including one of the world’s finest needlework collections sell for more than £1million

The lavish contents of an Elizabethan country house that featured one of the world’s finest collection of needlework have sold for more than £1million.

Micheál Feller, a butcher in Oxford, and his wife Elizabeth lived in the fittingly-named Upper Slaughter Manor near Bourton-on-the-Water in the Cotswolds countryside for more than 35 years.

The couple sold the manor as they were downsizing and parted with almost 1,000 items including rare embroideries, early English furniture, pottery and paintings.

The two-day sale by auctioneers Woolley and Wallis included the Fellers’ collection of more than 300 samplers and needleworks.

It was expected to raise £500,000 but a flurry of interest meant the contents fetched an overall hammer price of £864,000, with extra fees taking the final figure to £1.08million. The needlework collection alone made £268,275.

The auctioneers said the Fellers were ‘over the moon’ with the result and that several pieces were sold to ‘significant national or international collections’. 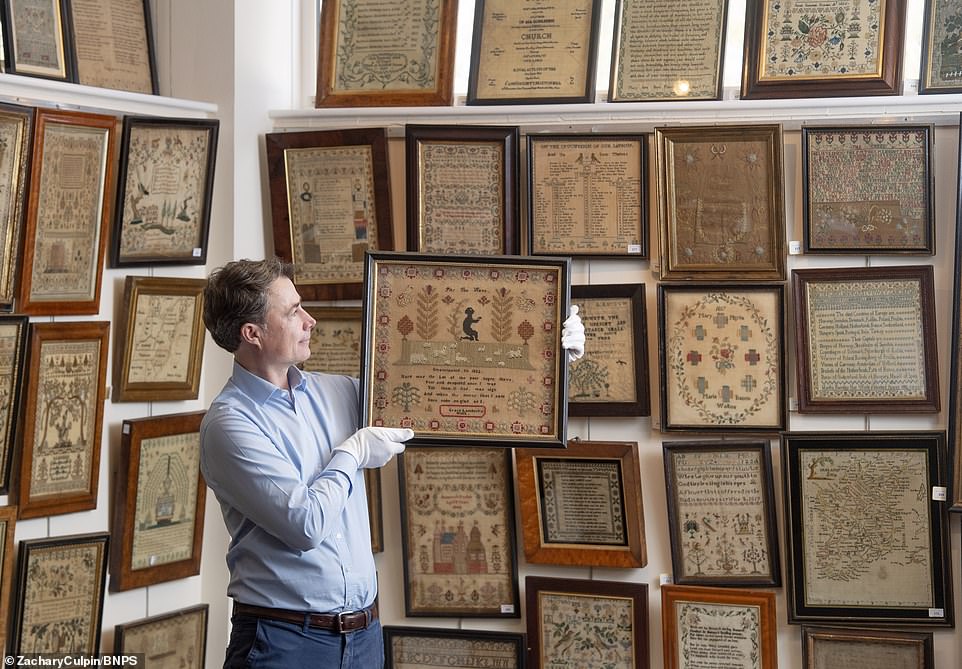 The two-day sale made more than £1million and was included a collection of over 300 samplers and needleworks. Pictured: Auctioneer, Mark Yuan-Richards is holding a William IV needlework slave emancipation sampler sold for £2500 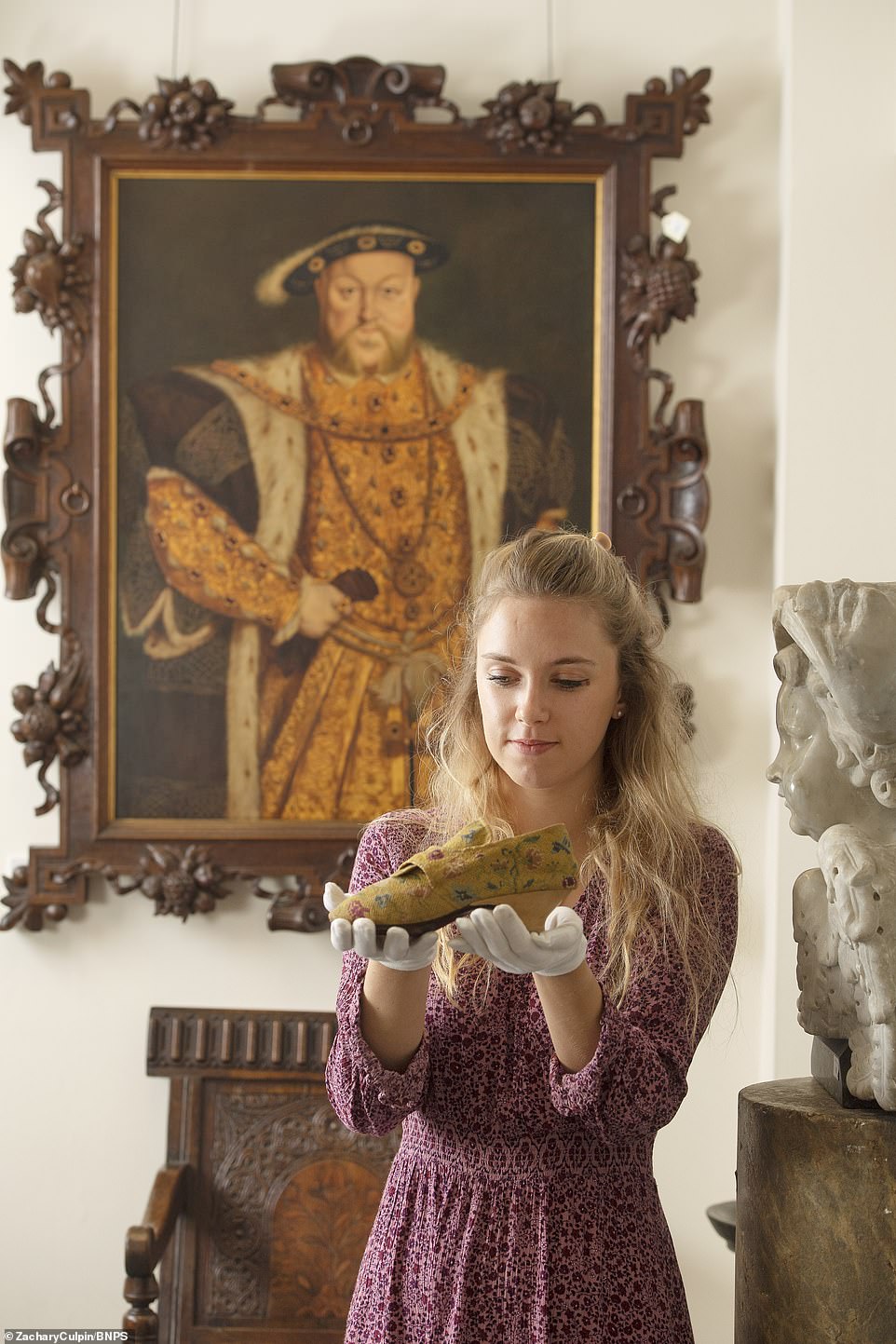 Yellow needlework shoes, one of which was held here by auctioneer Emily O’Donnell, sold for £2000 were part of the sale 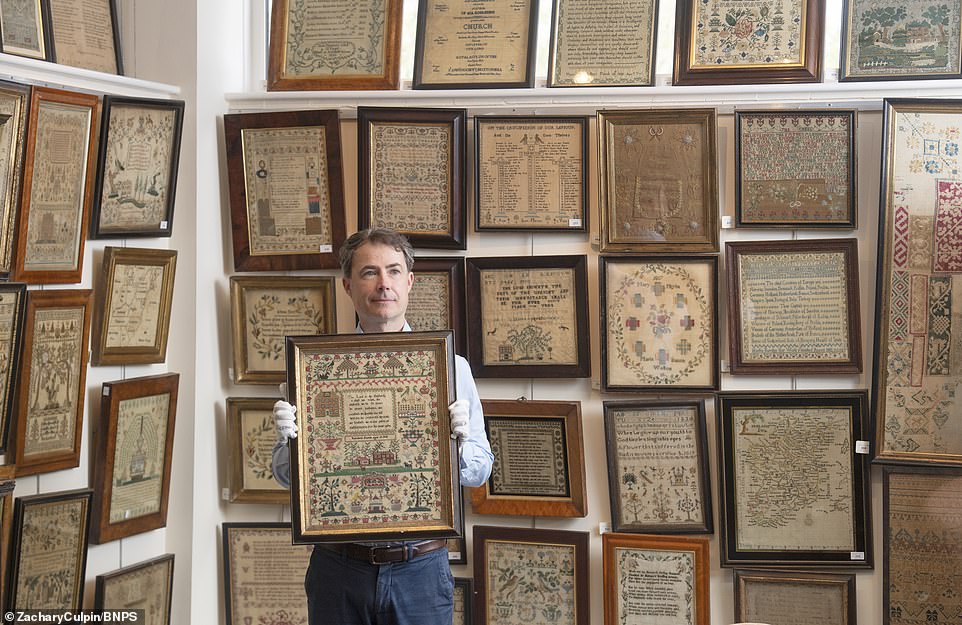 Micheal Fuller, a butcher by trade, and his wife Elizabeth have owned the fittingly-named Upper Slaughter Manor in the Cotswolds countryside since 1985. Pictured: Auctioneer Mark Yuan-Richards holding a Victorian needlework sample that had an estimate of £1,200 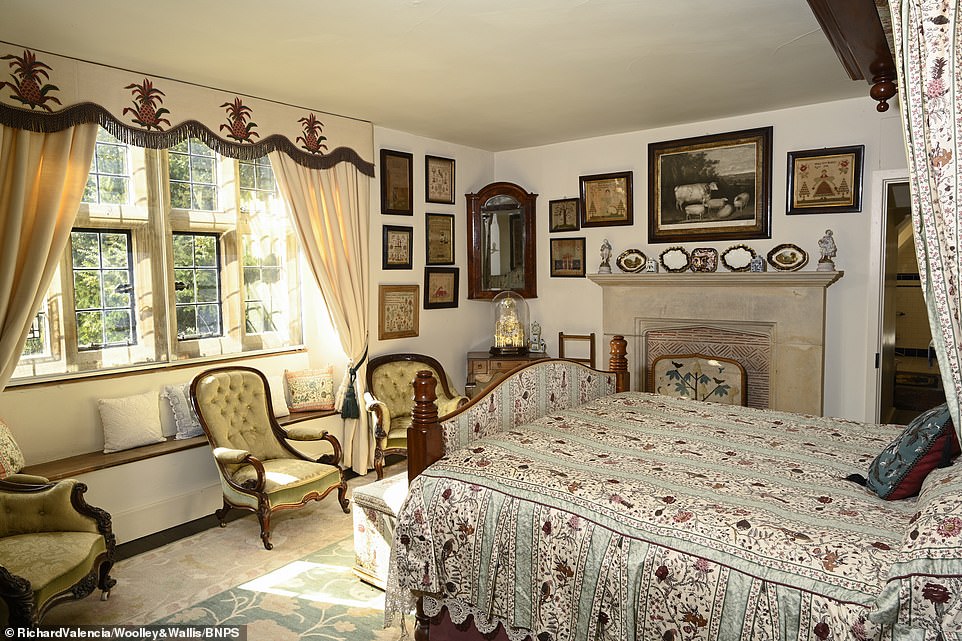 The Victorian bedroom includes an early Victorian bed that had a £1,200 estimate and Victorian rosewood armchairs (to the left of the room) that were estimated at between £5,00 and £1,000 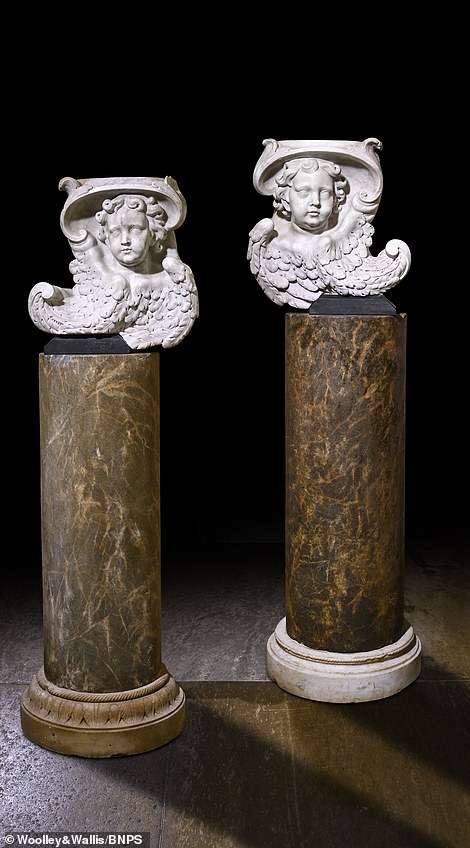 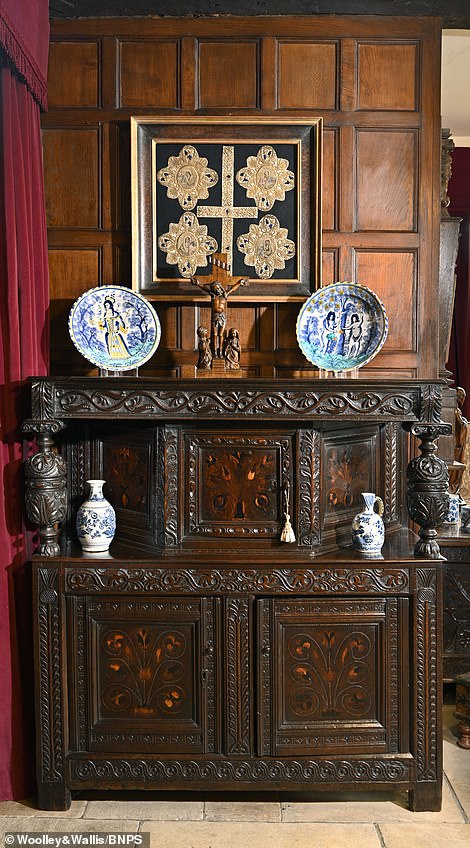 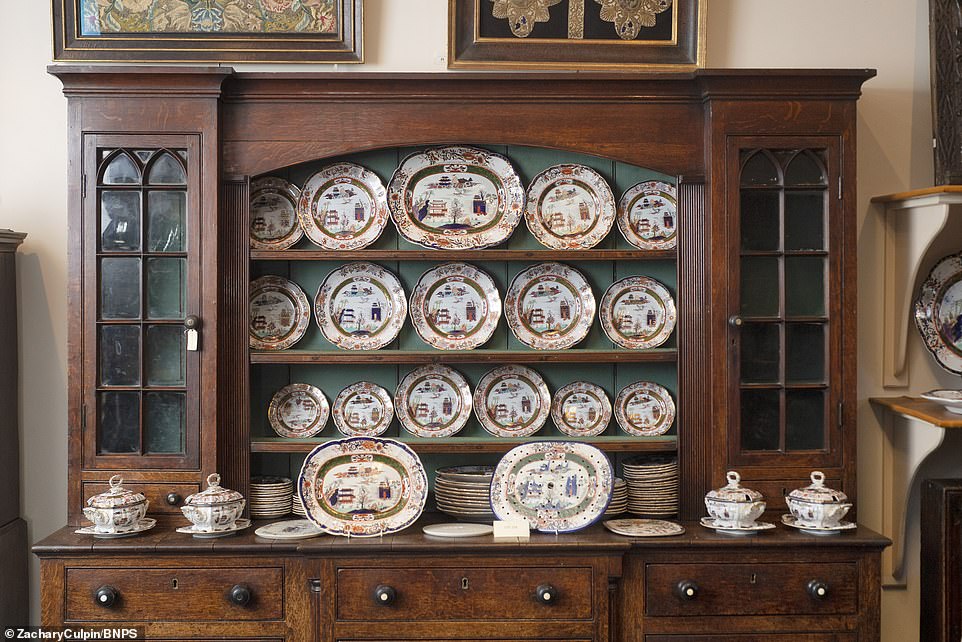 The Fullers have downsized and sold almost 1,000 items including rare embroideries, early English furniture, pottery and paintings. Pictured: A china dinner service with an estimate of £500 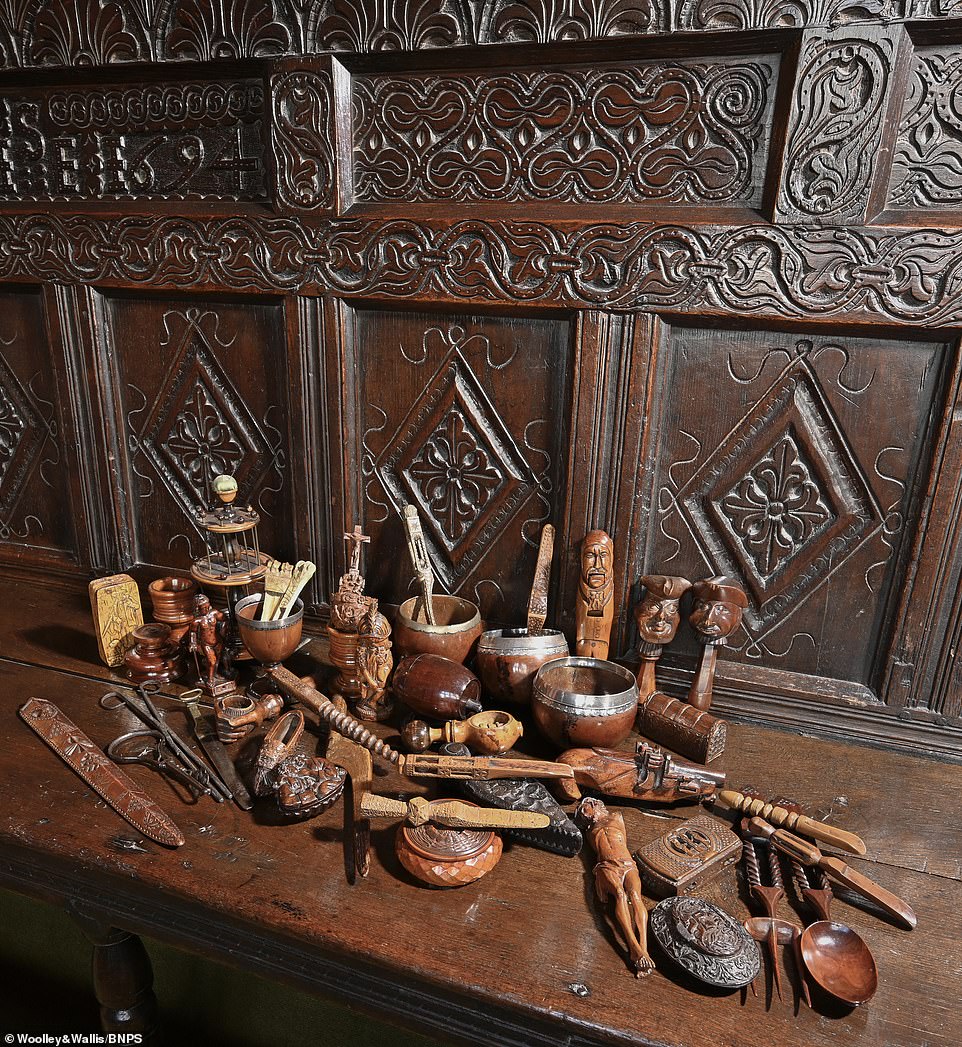 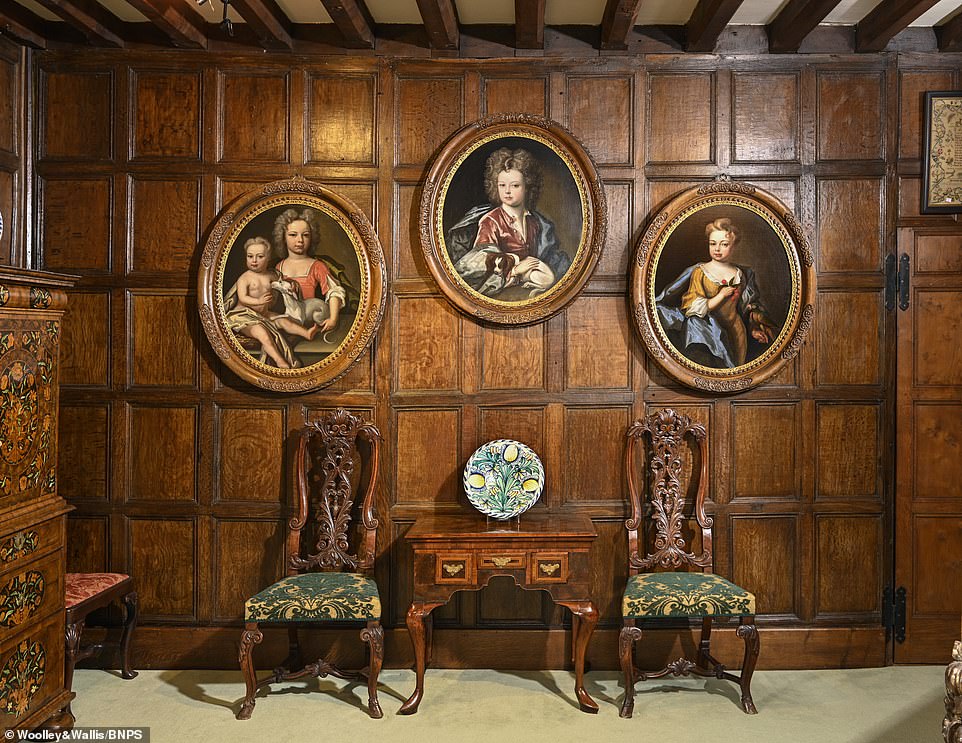 The panelled room had a George II yew and walnut dresser with drawers which had an estimate of £8,000.  There were also three portraits of children from the 1600’s which had estimates of £1,500 each 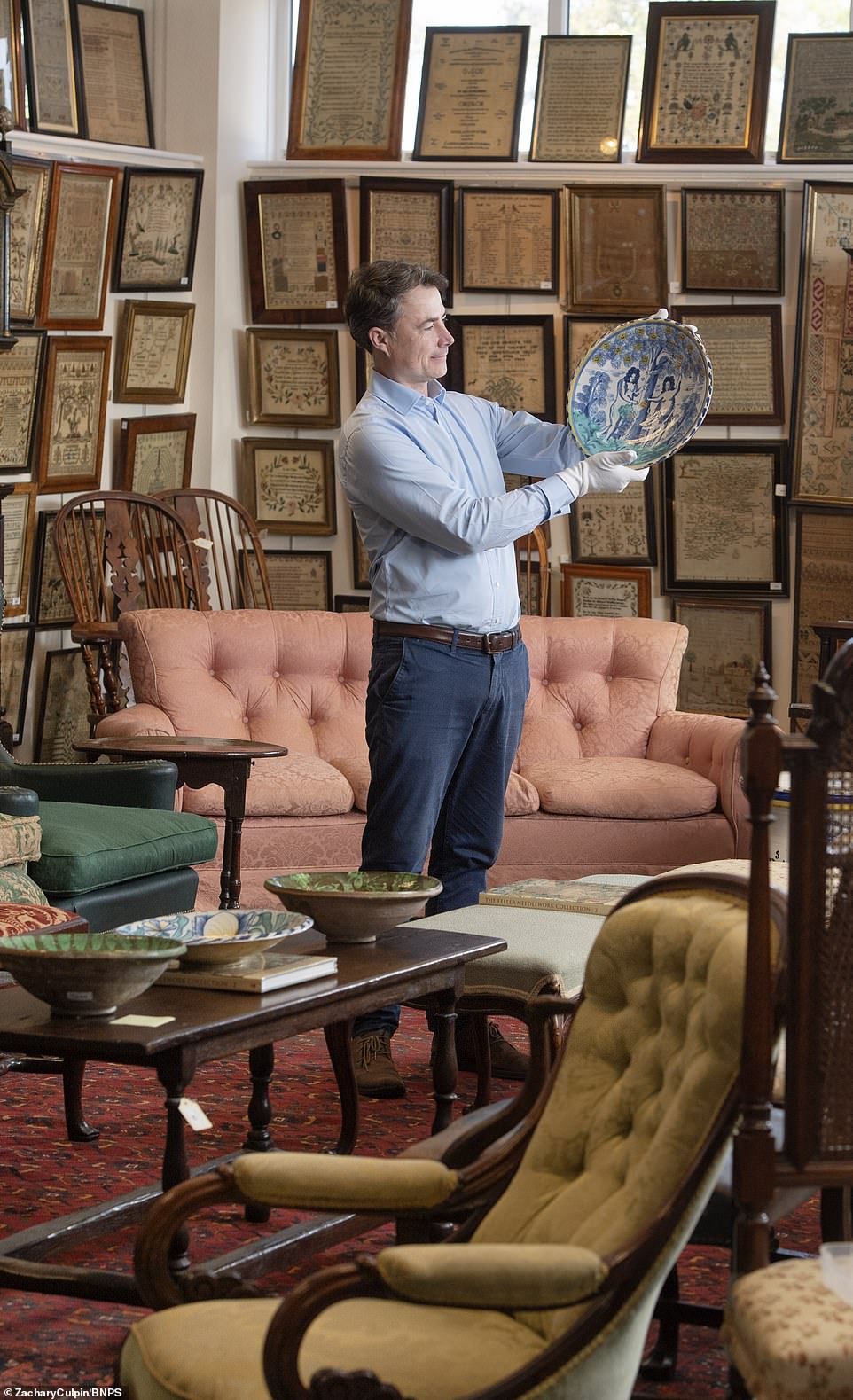 Auctioneer Yuan-Richards with a 17th Adam and Eve plate that had an estimate of £3,000. Mr Yuan-Richards was pictured among some of the Manor House items crammed into one of the Woolley and Wallis salerooms 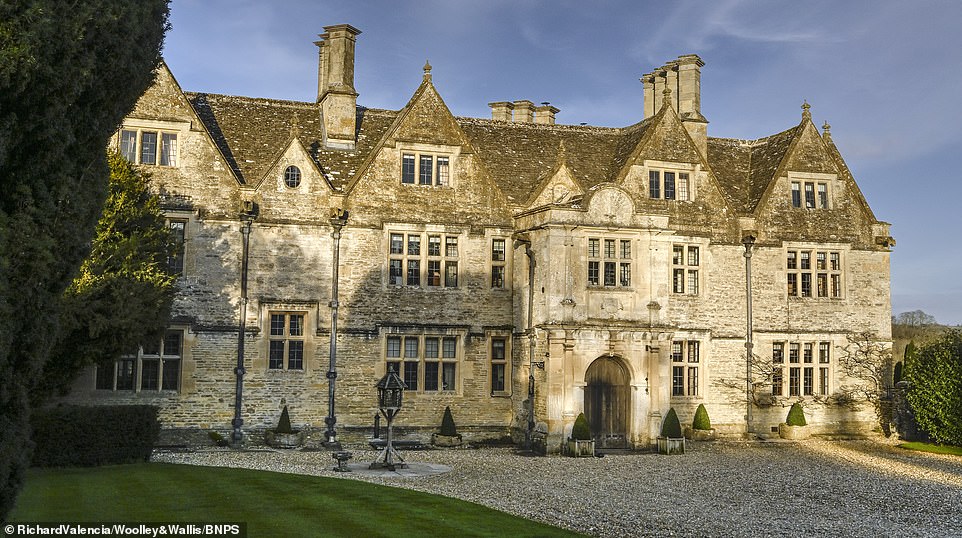 Mr Yuan-Richards said: ‘The Fellers were over the moon with the result of the sale, which was met with huge enthusiasm by the collecting community.’ Pictured: Upper Slaughter Manor 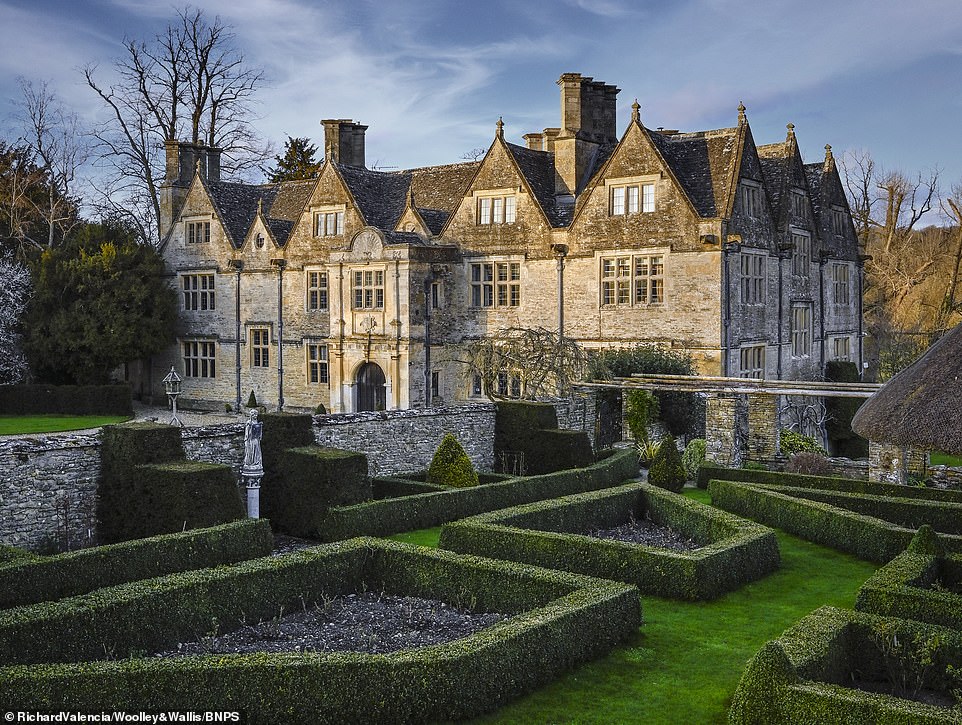 The auctioneer added: ‘The success of the auction is largely down to the rarity and extent of the collection that Micheal and Elizabeth have put together over the last few decades. ‘Several pieces have now gone into significant national or international collections’ 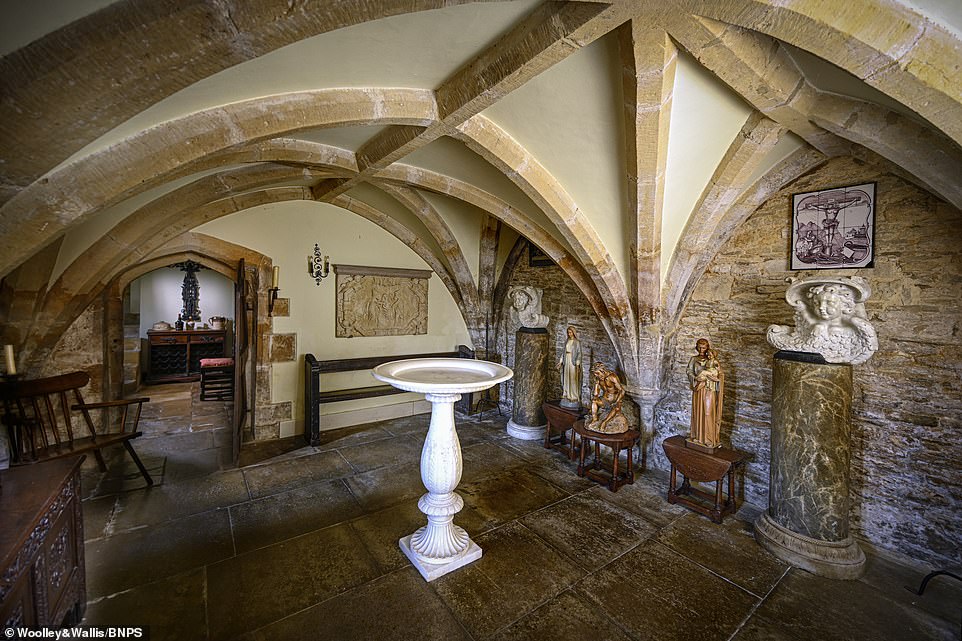 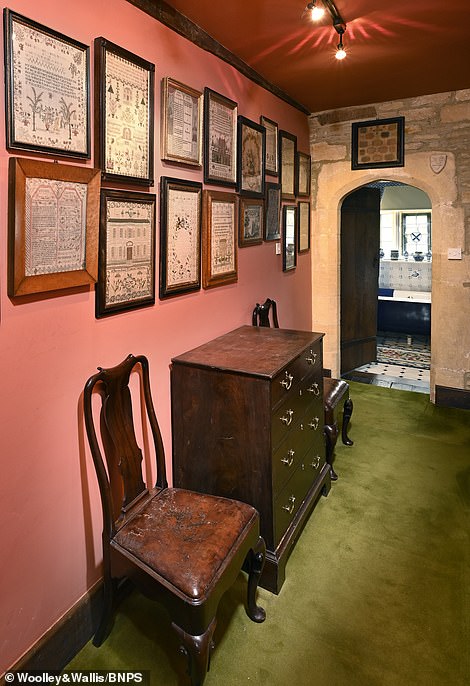 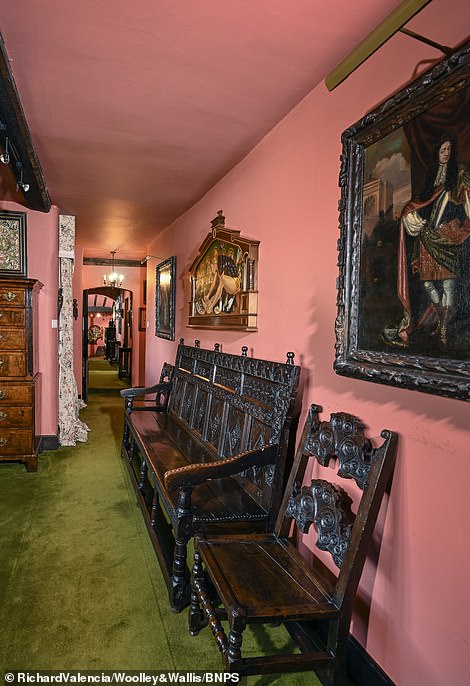 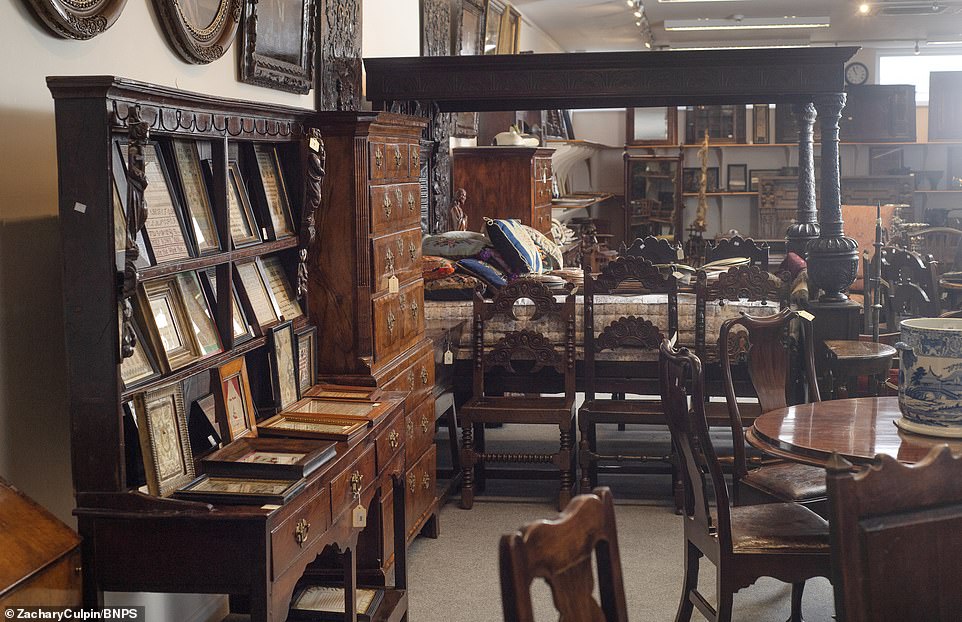 Auctioneer Mr Yuan-Richards added: ‘The Fellers were present in the saleroom for both days and, although it was an emotional time for them, they enjoyed watching items they have collected and loved find new homes where they will be similarly appreciated’ 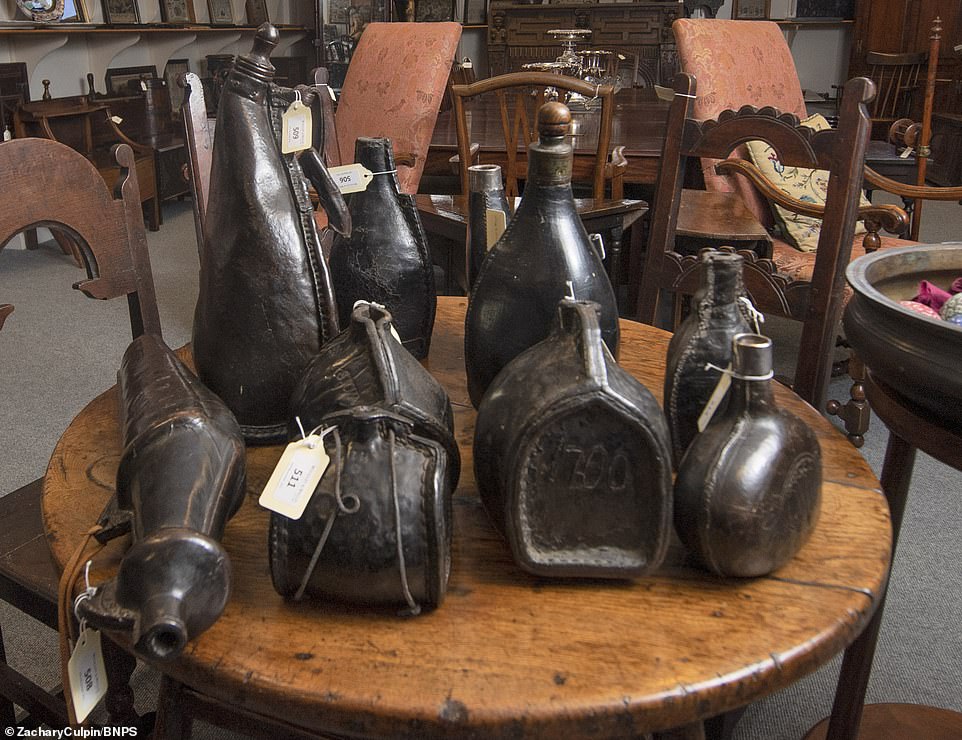 There were a variety of flasks up for auction, as pictured here in the Woolley and Wallis saleroom. The objects helped make more than £1million 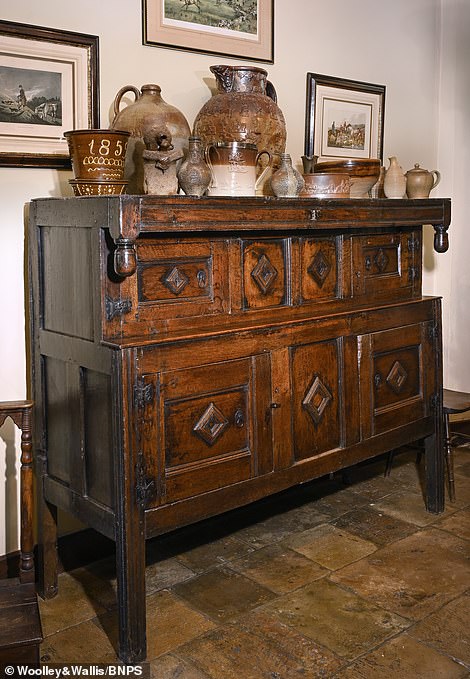 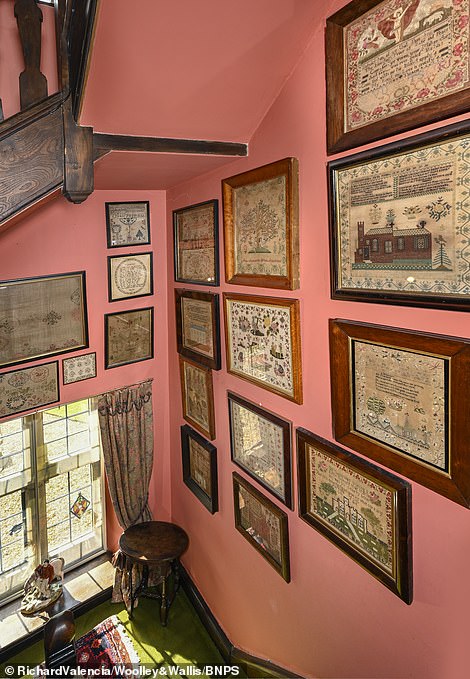 There were various pottery pieces in the sale and this oak cupboard that had an estimate of £1,500 (left). The huge needlework collection was hanging throughout the manor (right) 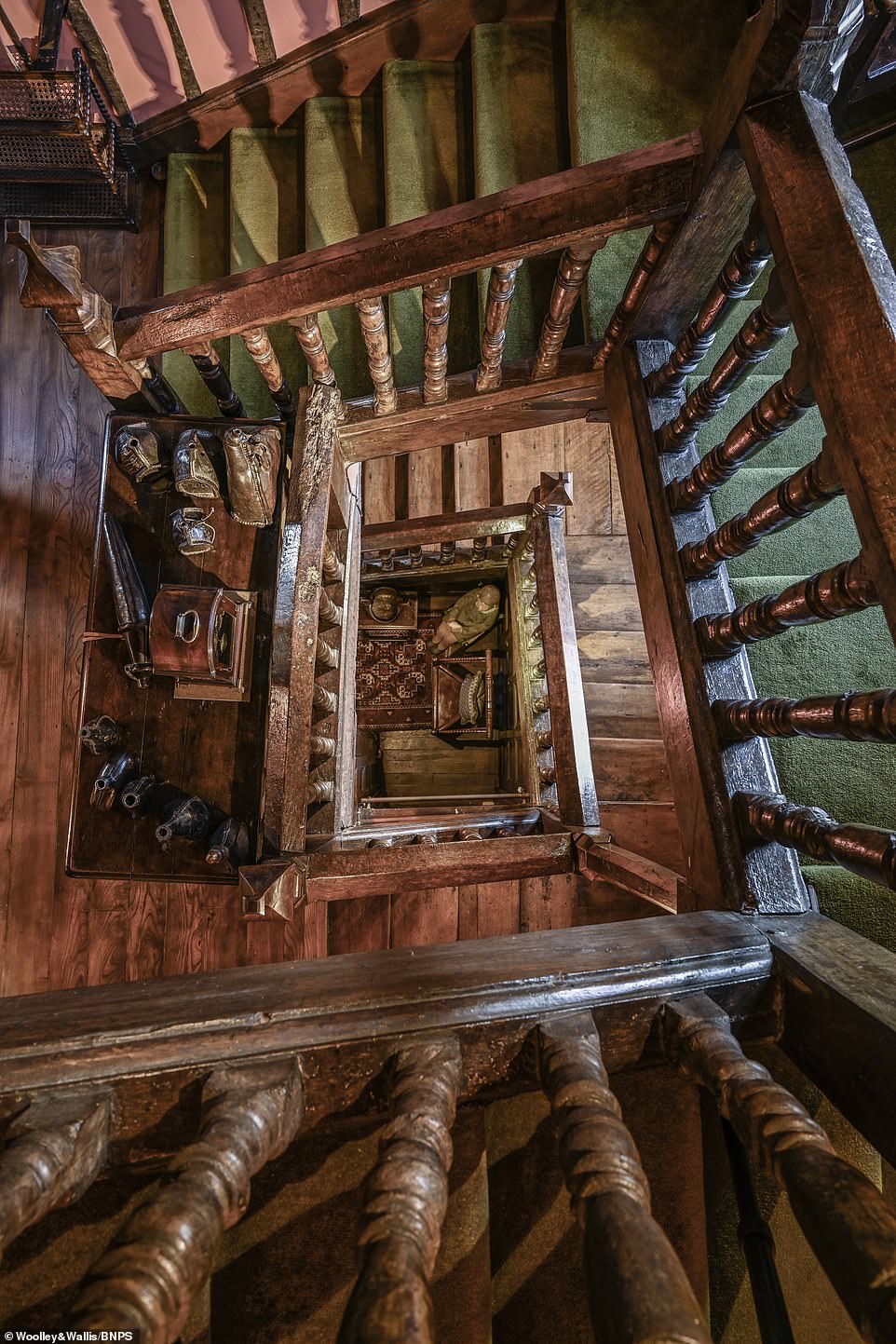