Home » World News » Coronavirus: Brits should NOT hug each other yet, SAGE expert says

Brits should NOT hug each other yet: SAGE expert says people must wait until Covid cases are ‘really, really low’ to safely embrace friends and relatives 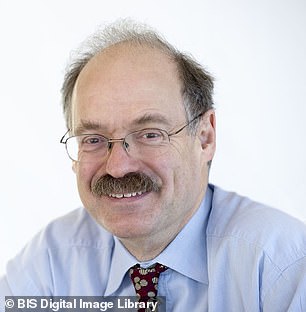 Britons should not hug other people until Covid case numbers are ‘very, very low’ and the size of the outbreak is much smaller than it is now, one of Number 10’s scientific advisers warned today.

Sir Mark Walport, who used to do Sir Patrick Vallance’s job as the UK’s chief scientific adviser, said it is not yet safe for people to have physical contact with loved ones.

Today marks England’s first step out of lockdown, with people are allowed to meet outdoors in groups of six for the first time since the start of the year.

But Sir Mark, who now runs the UK Research and Innovation department and sits on SAGE, said there is ‘still quite a lot of infection about’.

Around 5,300 people are testing positive for coronavirus each day in the UK and the Office for National Statistics estimates 160,000 people in England have the virus.

The total number is on par with October and daily cases with April last year towards the end of the first lockdown. Sir Mark said there is confidence because cases are coming down, but if they were at this level and rising experts would be worried.

He didn’t say what a ‘very low’ number would be, however, and insisted it would be ‘significantly lower than what we’ve got at the moment’.

Cases were lowest in early July last year, when there were just 550 per day, on average – one tenth of the current rate.

The number of coronavirus shielders who left their homes in England last month rose as the vaccine roll-out steamed ahead and infection rates plummeted.

An Office for National Statistics report found 81 per cent of adults deemed extremely vulnerable to the virus ventured outdoors at least once in the last week of February – up from the 76 per cent at the end of January.

Almost half (45 per cent) who left home went to the shops or pharmacy despite being strongly advised not to.

Exercise was the top reason (63 per cent) and doctors appointments (39 per cent) was third. But only three per cent said they had left home to socialise with others.

Almost 4million Britons were asked to shield during the second wave of the epidemic because they have underlying health problems which puts them at higher risk of hospitalisation or death if they catch the virus, including severe asthma, diabetes and heart disease.

They were advised to stay at home and avoid others until ‘at least’ the end of March, and urged only to venture out for medical appointments and exercise.

But earlier this month they were told they could ‘begin to follow the national restrictions alongside the rest of the population’ from April 1 as the epidemic peters out.

Figures show there are currently just 5,000 daily infections on average across Britain and 62 deaths – down from peaks of 60,000 and nearly 2,000 in mid-January.

More than 30million Britons have so far been given at least one dose of Covid vaccines, with 3.5m having been fully vaccinated. That represents more than half of the adult population.

Around half of all people in the UK have now been part-vaccinated against the virus, though, and the jabs seem to offer strong protection for most people.

It is not clear how well they prevent transmission, but the ratio of infections to hospital admissions and deaths is expected to be much lower in a third wave.

Sir Mark cautioned that there are still around 37million people who haven’t had a jab and that it wasn’t yet safe to let the virus go.

He said on Times Radio today: ‘I think that when the evidence shows that the case number is really, really low indeed, that’s the point. So some degree of caution makes sense.

‘We’re also learning more about the effectiveness of the vaccine every day at the moment. As more and more people get the vaccine then we will learn from the numbers.’

Pressed for an approximate infection rate that he would consider safe he added: ‘Well, how long is a piece of string?

‘As I say, it’s significantly lower than we’ve got at the moment, you know 5,000 cases a day is roughly where we were at the end of September.

‘Certainly if this was on an upward trajectory we would be pretty worried at the sorts of numbers.

‘Somewhere around 0.3 to 0.4 per cent of the population across the UK on any day being infected – that’s the prevalence of the infection.’

Even vaccinated people should be careful about hugging, Sir Mark said, suggesting it wasn’t a good idea for grandparents to embrace their families.

He said that even though the virus doesn’t spread as well outdoors it didn’t mean people were safe, and said it was still risky to be close to people.

‘We know now that airborne transmission is the most important way which this virus transmits and clearly when you’re outside it gets blown away much more easily.

‘And it’s one of the reasons that summer is a safer time for most respiratory viruses.

‘We have just come out of a time of year when it takes people a certain amount of persuasion to be outside.

‘The bottom line is, there is still quite a lot of infection about and we need to emphasise to people that the relax in the restrictions is outdoors and it doesn’t give people an excuse to sneak into the house.’

He added on Radio 4: ‘The transmission outdoors is much less, but it is actually proximity at the end of the day – that is the important issue in transmission from one person to another.

‘And prolonged close proximity outside carries its own risks. So people are going to have to exercise their judgment, but hopefully in a cautious way.’