Not since the Second World War has a year group of pupils weathered such a horrendously disrupted education as those receiving their A-level results yesterday.

Covid closed their schools for almost a year, forcing them to endure the peculiarities of remote learning, and their GCSEs were cancelled. These were the first formal exams many teenagers had taken.

So the Mail congratulates all those hard-working pupils who achieved the grades they needed to find jobs or go to university. They richly deserve their day of celebration. 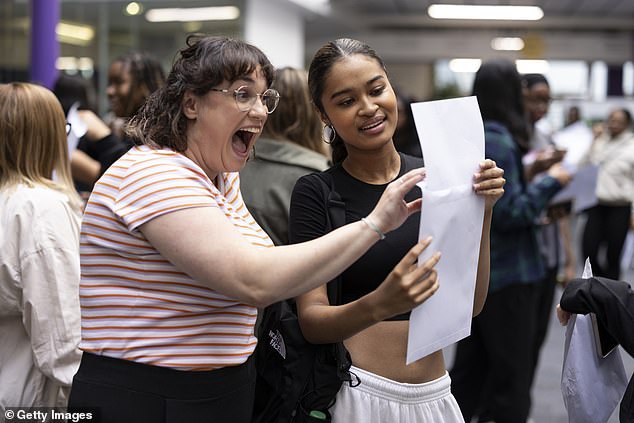 And we commiserate with the tens of thousands who sadly came up short – missing out on their first-choice universities. They must now join the anxious scramble for courses at other institutions.

Predictably, some critics moaned about the record slump in top grades awarded, claiming pupils had been treated unfairly.

But the decline happened because they are again sitting exams, instead of being assessed by over-generous teachers.

Indeed, the proportion receiving A or A* marks will fall sharply again next year back to pre-pandemic levels.

Yes, a few pupils may be disadvantaged. But re-imposing rigour and robustness to the education system could not be more vital. Reforms advanced by then education secretary Michael Gove, including tougher exams, have restored A-levels as a gold-standard qualification, after the rot set in under Tony Blair who allowed grade inflation to run rampant.

If these stringent benchmarks are casually abandoned, the biggest losers will be future generations of pupils.

Up pops inept London Mayor Sadiq Khan on social media to advise the public on how to stay safe in thunderstorms.

Seek shelter indoors, he writes gravely, and if in a field, crouch down.

As violence engulfs the capital, wouldn’t an anxious public rather know how to stay safe on Mr Khan’s streets?

How old men on mobility scooters, like Thomas O’Halloran, can go about their lives without being stabbed to death? How the rising tide of gun and knife crime happening on Mr Khan’s watch can be turned?

That he has no answers speaks volumes about his warped priorities and appalling leadership. The mayor and police should heed ex-Met commissioner Lord Stevens.

Protecting the communities they are meant to serve, he says, means ditching virtue-signalling wokery and returning to ‘hard-edged basics’: Cracking down on crime by catching and convicting culprits.

Policing the streets in a meaningful way and keeping people safe would be an appropriate legacy from Mr O’Halloran’s senseless killing.

We know that emergency care in Britain is in a desperately poor state.

But what sort of country have we become when seriously ill elderly patients must suffer life-threateningly long delays before an ambulance takes them to hospital?

Today we report how a woman of 90 with a fractured hip waited an appalling two days before paramedics arrived. In another harrowing case, an 87-year-old grandfather spent a rainy night in a makeshift shelter, built by his family, after falling in his garden.

But a key problem is patients blocking beds in hospitals under intolerable strain, rather than being moved to social care.

This means it is pointless for ambulances to take new patients to A&E because there is simply nowhere to put them.

People call 999 at times of immense distress and pain. They don’t expect the NHS to add to their trauma. The case for urgent reform has never been more pressing.