Plans to build a viaduct to carry Melbourne’s airport rail link within metres of a historic flour mill have alarmed developers and Victoria’s most influential heritage lobby group.

The state government last month revealed concept designs for the long-awaited, $8-$13 billion airport rail project through the city’s western suburbs. Work is set to start next year, with the line to open in 2029. 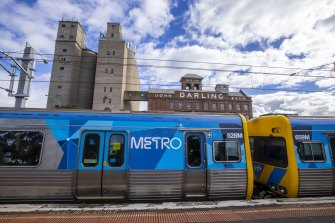 The 100-year-old John Darling and Son flour mill next to Albion station in Sunshine.Credit:Wayne Taylor

The plans include a 50-metre-high rail overpass that will start near Sunshine station and continue for less than two kilometres along the existing rail corridor.

The twin tracks will soar over Albion station, Anderson Road and Ballarat Road – which is itself an overpass – and pass close to the 100-year-old John Darling and Son flour mill. The overpass will then descend to follow the existing freight line and continue, mostly at ground level, towards the airport.

The Pelligra Group, which own the heritage-listed mill and is planning to spend up to $100 million developing it into a hotel and office space, warned the bridge would cut views from the building “in half” and come within 15 to 20 metres of the structure, creating noise and vibrational impacts.

Any changes to a site protected under the Victorian Heritage Register require a permit from Heritage Victoria, which has yet to receive an application for the overpass.

Planning Minister Richard Wynne has the power to intervene in the process and has done so previously on other major transport projects.

Simon Ambrose, chief executive of the National Trust of Australia’s Victorian branch, said the John Darling building was “one of the most historically significant and intact flour mills in the state”.

“The National Trust would have serious concerns about any proposal which would impact on the integrity of the complex, the ability for it to be appropriately adapted and used into the future, or its visual prominence as a local landmark,” he said. “We expect these issues to be carefully considered as part of planning for the Melbourne Airport Rail project, and for meaningful consultation to be undertaken prior to any decisions being made.”

Pelligra’s chairman, Ross Pelligra, will soon apply for permits to develop the 13,000-square-metre site into a mixed-use facility that will include a 140-room Mercure hotel, 12,000 square metres of office space, retail stores and childcare. 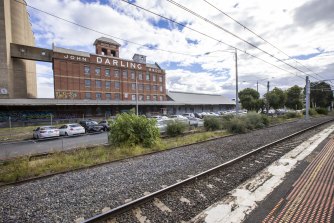 Developers want to turn the heritage-listed mill into a hotel. Credit:Wayne Taylor

Mr Pelligra said he backed the airport rail project, describing it as a “game-changer for Melbourne”, but the proximity of the planned overpass to the John Darling mill threatened to disturb the “privacy of the tenants and the patrons of the facility”.

“All of a sudden those premium hotel rooms facing the railway line are no longer premium because they’re looking at a railway overpass,” he said.

The overpass would undoubtedly dominate the skyline and cut the view from the building in half, he said.

Mr Harratt said he was troubled by signs the government would not consider a major upgrade for Albion station, which he described as “one of the worst stations in Melbourne”, being plagued by vandalism and police incidents.

A government spokeswoman said the overpass was the chosen design because it avoided issues involving relocating a jet fuel pipeline and the need to rebuild Ballarat and St Albans roads.

“The elevated rail design at Albion is the best option to deliver Melbourne Airport Rail,” the spokeswoman said.

“We recognise the heritage importance of the flour mills in Albion and so does the community, with this coming through as a strong theme in recent community engagement.”

It comes as Brimbank’s mayor has raised the alarm about signs the Andrews government is walking away from its promise to build a “super hub” at Sunshine station – a project that was set to fuel an economic boom in the suburb.