Home » World News » ‘Disgusting miscarriage of justice’: Man taped to a seat for assaulting flight staff gets 60 days in jail

A US airline passenger who was restrained in a seat with restraint tape after he groped two flight attendants and punched a third was sentenced to 60 days in jail and a year of supervised release, according to court records.

Maxwell Berry, 23, pleaded guilty to three counts of assault within maritime and territorial jurisdiction in the incident, which occurred on a Frontier Airlines flight last summer. 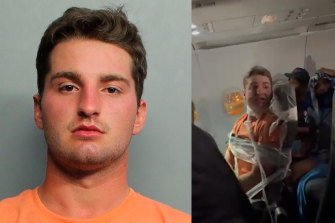 Maxwell Berry, 22, of Norwalk, Ohio, was taped to his seat by flight staff due to unruly behaviour.Credit:AP, Twitter

After sentencing, his attorney, Jason Kreiss, called the incident an “aberration,” saying Berry is “a really good kid from a great family who was punished for his worst day”.

“Although we don’t believe 60 days was necessary based on Max’s significant self-reform and other mitigating factors, we respect the judgment of the court,” Kreiss said Wednesday in a statement to The Washington Post.

Berry had reportedly been drinking on a Frontier Airlines flight from Philadelphia to Miami in August.

In a video first reported by Miami TV news station WPLG, Berry was seen with his mask under his chin and heard cursing at other passengers, talking about his family’s net worth.

As The Washington Post previously reported, the arrest report showed that Berry had ordered two alcoholic beverages from a flight attendant and “inappropriately” brushed his cup against her backside while ordering another drink.

Police said Berry spilled that new drink on his clothes, then went to a lavatory and came out without his shirt. The flight attendant helped him get a clean shirt from his carry-on luggage, according to the report.

For the next 15 minutes, police said, Berry walked in the cabin and, at some point, groped the breasts of a different flight attendant.

Then he walked up behind both female flight attendants “and put his arms around both of them and groped their breasts again,” according to the report.

The report stated that the male flight attendant, with help from other passengers, “had to tape him down to the seat and tie him with a seat-belt extender for the remaining flight”.

After Berry’s arrest, he underwent a mental health and substance abuse evaluation, and he began receiving treatment for anxiety and depression in addition to anger management courses, according to the court records.

Frontier Airlines said at the time that the employees were placed on paid leave pending an investigation – a decision that drew outcry from a union representing Frontier flight attendants. The airline did not respond to requests for comment Wednesday about the results of that investigation or what happened with the employees.

One of the flight attendants – Jordan Galarza, whom Berry punched, attended the sentencing hearing on Tuesday Washington, DC time and told WPLG that his job was to protect all the passengers in the plane, including Berry.

He told the news station that the tape, which is known as restraint tape, may have looked barbaric, “but it worked perfectly and no one got hurt because of how we did what we did”.

Galarza and flight attendant Tymerah Burgess, who was groped by Berry, told WPLG that Berry’s 60-day sentence was not enough given the severity of the incident. Galarza called it “a disgusting miscarriage of justice.”

“He made an enemy of everyone on that flight,” Galarza told the news station after the sentencing. “The people on that aircraft saw justice happen – more than what we saw today.”

Berry’s attorney said his client will pay for the incident for the rest of his life.

“Max has absolutely learned his lesson and is paying a significant price for his conduct,” his attorney wrote to the court.

“This stigma will follow him around and hinder his personal relationships, his ability to obtain employment, his eligibility for housing, positions of trust, and will affect other life issues for the foreseeable future.”