Disturbing moment care home staff drag dementia-stricken pensioner, 85, across room and dump her on bed as she wails in panic after son set up spy camera over fears of her mistreatment

This disturbing video shows the moment care home staff dragged a quivering and distressed disabled pensioner across her room, leaving her in a urine-stained bed.

Michael Lanera fitted a spy camera in his 85-year-old dementia-stricken mother’s room in Halifax, West Yorkshire, after he suspected she was being mistreated.

The shocking video, filmed on December 1, 2018, shows nurse Mamello Herring and care worker Maria Jackson dragging Angelina Lanera from the toilet back to her bed with her knickers around her ankles.

Mrs Lanera can be heard screaming and crying in distress, but the workers continue to manhandle her using a banned ‘drag lift’ technique which involves someone putting a hand or arm under the person’s armpit.

The technique is banned because it can result in injuries to those involved. The care workers are seen to leave her in the urine-stained bed and clothes, Bradford Crown Court heard on Friday.

Prosecutor Wayne Jackson said on December 1, 2018, Mr Lanera visited his mother and found her lying in a urine-stained bed still in her clothes from the day before. When he checked the camera he discovered the horrific footage.

When the pair were questioned Herring said she knew ‘drag lifting’ was not permitted because it was unsafe and she had been taught that in training sessions, the court heard.

The defendant Jackson also accepted her actions had been wrong and it went against her training.

Herring, 55, of Leeds, pleaded guilty to a charge of ill treatment by a care worker, which can carry a maximum sentence of five years in jail.

She was given an 18-month community order and told to do 250 hours’ unpaid work for the community.

Jackson, 41, of Hipperholme, West Yorkshire, pleaded guilty to common assault and also received an 18-month community order. She was ordered to do 180 hours’ unpaid work.

Although Herring had been suspended from the nursing register, she had continued to work in the care sector, the court heard. 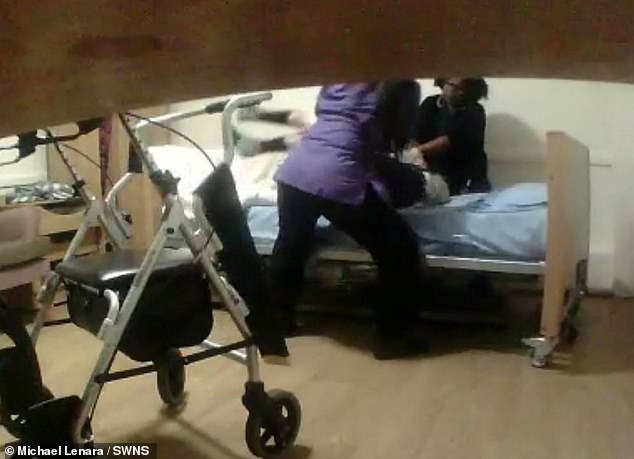 Michael Lanera fitted a spy camera in his 85-year-old dementia-stricken mother’s room in Halifax, West Yorkshire, after he suspected she was being mistreated 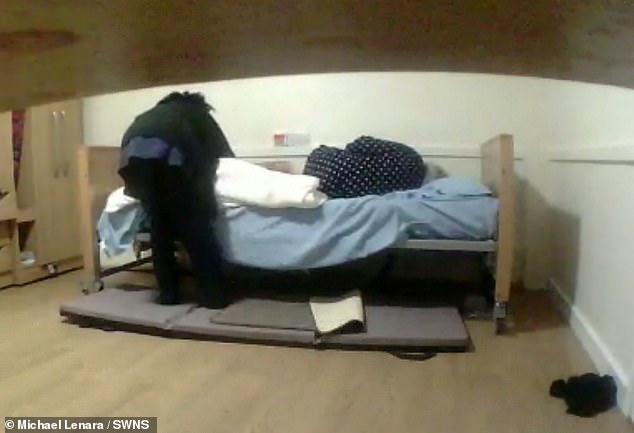 Mrs Lanera can be heard screaming and crying in distress, but the workers continue to manhandle her using a banned ‘drag lift’ technique which involves someone putting a hand or arm under the person’s armpit

Jackson had been doing kitchen work at other care homes during the Covid pandemic.

Herring expressed remorse for her offending and said she was ashamed of her conduct shown on the footage.

Jackson’s barrister said she had been relatively inexperienced and junior at the time of the offending.

She was said to have handled a difficult situation badly and it was a great regret.

The Recorder of Bradford Judge Richard Mansell QC said ‘drag lifting’ was specifically excluded because it was potentially unsafe never mind the indignity it involved.

He told them: ‘I totally reject any suggestion that either of you were not sufficiently trained or experienced to understand that.

‘You had the training, however, and to drag a lady as vulnerable as her from the toilet, with her knickers around her ankles and then to manhandle her on to and up her bed, whilst she was moaning and crying in distress, is a gross failure by both of you to care for this lady.’

He accepted that dealing with such vulnerable residents was challenging, but added: ‘You both deserve to have lost, or to lose, your jobs because this kind of lack of humane treatment has no place in any care home setting.’ 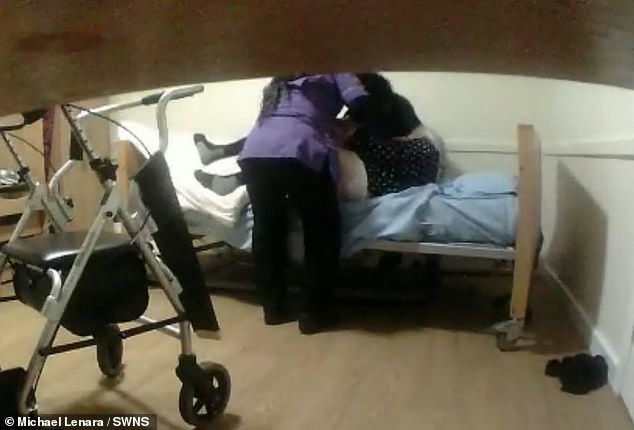 The judge said Mrs Lanera had been found by her son in urine-soaked clothing and the pair would have got away with what they had done if he had not installed the camera.

Judge Mansell said many right-thinking members of the public would consider a short sentence of imprisonment was deserved by both defendants.

But he concluded the offending had not been wilful or deliberate ill treatment.

He said it had been ‘grossly negligent behaviour’ brought about by a lazy, sloppy failure on the part of both defendants to take their time and follow proper caring procedures in her care plan.

He added that if it had taken up to half an hour to use a Zimmer frame, chair or hoist to carefully lift Mrs Landera back into bed and get her settled, that should have happened.

He said that was the kind of care Mrs Lanera had a right to expect, but the pair had treated their resident ‘like an object’.

Mr Lanera attended the hearing and Judge Mansell said he was sorry that he had had to wait so long for the case to be concluded.

Judge Mansell added: ‘I’m sure you feel that both defendants possibly deserve more severe sentences than they have received, but at least there is some closure.’

Speaking after the sentencing, Mr Lanera said he was ‘angry’ at the pair who should have been caring for his vulnerable mother, who has since died.

He said: ‘I’m really angry with them for they did to my mum. Mamello has set up her own healthcare business. This is an insult to my late mother.

‘She had also been warned before about her actions when she lifted a patient with a broken leg at another care home.

‘I believe in second chances and we all make mistakes. But she hasn’t learnt from her mistakes and now she’s been able to set up a business in healthcare.

‘She shouldn’t be able to work in care again.

‘Jackson is working in a kitchen, at least she is away from vulnerable people there.’