The former US President sparked a frenzy among Twitter users after footage of his latest appearance seemed to show him wearing his trousers backwards. The video shows Mr Trump walking on stage at a Republican Party rally in Greenville, North Carolina, wearing a navy suit without a front zipper fly on his trousers.

One Twitter user said: “My grandfather, who had Alzheimer’s, would do this.

“Been saying Trump has it since he sundowned.

“He was coming down the ramp off Air Force One to the tarmac, and had to be retrieved by a Secret Service agent.”

Another person added: “When you wear diapers and you buy tailored pants, zippers are stupid.” 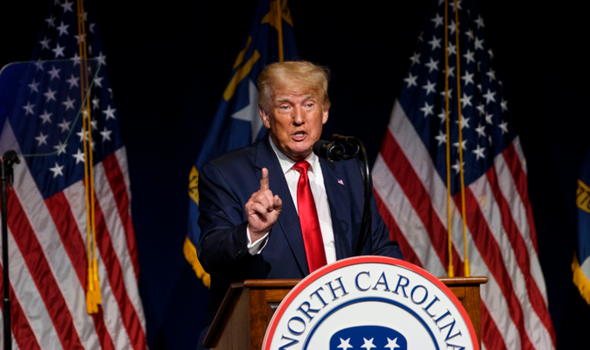 A third commenter wrote: “Are they on backwards, or is it just that they couldn’t put a zipper in the big top they bought from the local circus to make his pants out of?”

Another user said: “I’m so confused by what I’m seeing here and I feel like I’ve now spent entirely too much time staring at his below the belt region that I’ve gotta tap out for now.

“Ya’ll let me know if you figure something out, though.”

Other users pointed out the creases on the former President’s trousers.

One person tweeted: “I don’t know about being on backwards, but I can’t say I’ve ever seen such severe wrinkling. How does that happen?”

Another user added: “The pants are so ill-fitting, the creases could be from excess material (to make it less apparent he’s wearing an adult diaper?) bunching up while he was sitting for 30-45 minutes.

“It does look like you can see a belt buckle?”

Supporters of the former President took to the social media platform to defend him, claiming the video had been edited to make it look like he was wearing his pants backwards. 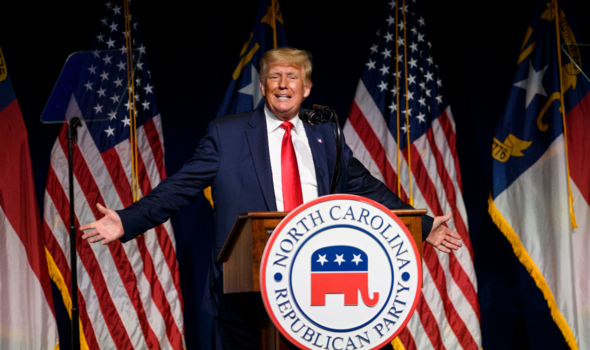 During the appearance, Mr Trump called on world leaders to demand China pay “reparations” to “compensate” for the destruction caused by the coronavirus pandemic.

He said: “The time has come for America and the world to demand reparations and accountability from the Communist Party of China.

“We should all declare within one unified voice that China must pay, they must pay!”