Van driver, 54, is found guilty of killing motorcyclist, 30, while on hands-free call… 15 years after he left fled hit-and-run crash leaving schoolboy, 13, to die in road

A van driver mowed down a motorcyclist while on a hands-free call 15 years after he fled the death-crash scene of a teenage schoolboy, a court has heard.

Kurt Sammon, 54 of Stockport, was charged after he jumped a red light during the evening rush hour and hit motorcyclist Louis McGovern, 30, while on a hands-free call in January 2019.

Mr McGovern, who was travelling on his Suzuki motorbike, suffered multiple injuries and died the following day in hospital.

He was found guilty of causing the death by dangerous driving of McGovern by unanimous jury decision at Minshull Street Crown Court – with jurors being told Sammon has ‘one of the worst driving records ever seen’.

15 years earlier, he was involved in the death of Michael Weaver, 13, who had crossed a dual carriageway to collect a pizza with his family. 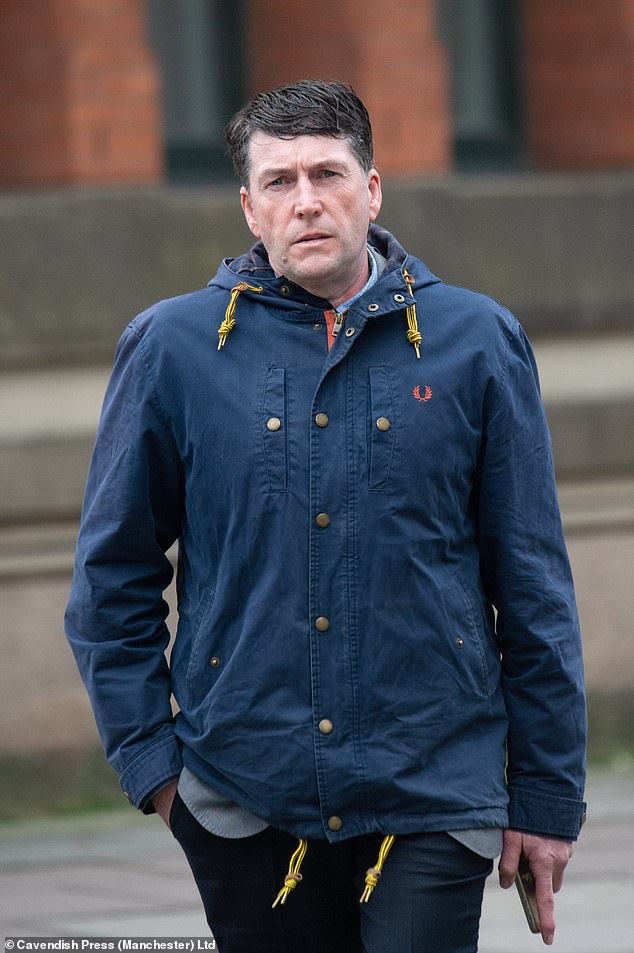 Pictured is Kurt Sammon, 54 of Stockport, who was on a hands-free call when he hit motorcyclist Louis McGovern, 30 in January 2019

Sammon, who is now a car valeter, had been convicted of failing to stop after he hit Weaver while driving a Volvo 460 with no valid insurance or MOT.

The schoolboy was mowed down at 43mph, and died almost instantly after suffering serious injuries to his ribs, a broken back and severed spinal chord.

Following the crash Sammon drove off and dumped the car two miles away.

He was initially charged with the more serious charge of causing Michael’s death by dangerous driving but the charge was dropped after a key witness disappeared.

Sammon had been drinking the heroin substitute methadone shortly before the tragedy, and said he had been ‘in a bad way’ after an argument with his boss at work. 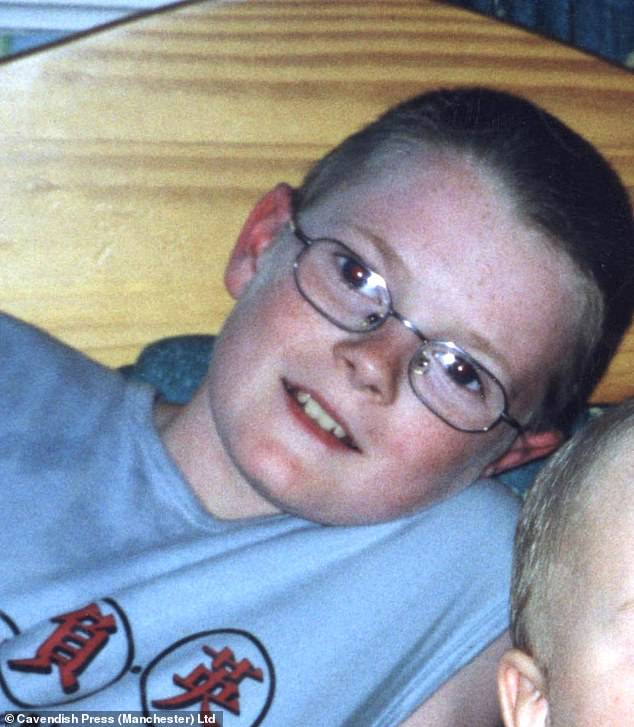 Police arrested him and discovered he had a record dating back to 1982, including driving whilst disqualified.

He admitted lesser offences – of failing to stop and reporting an accident and having no insurance or MOT – and is thought to have served just three months before being freed – sparking fury by Michael’s family.

Prosecutor Robert Hall said Sammon may have been ‘distracted’ by using his phone, with data showing he had received calls during his journey.

Less than five minutes before hitting McGovern, Sammon sent a WhatsApp message, received one himself and took a call on his phone. 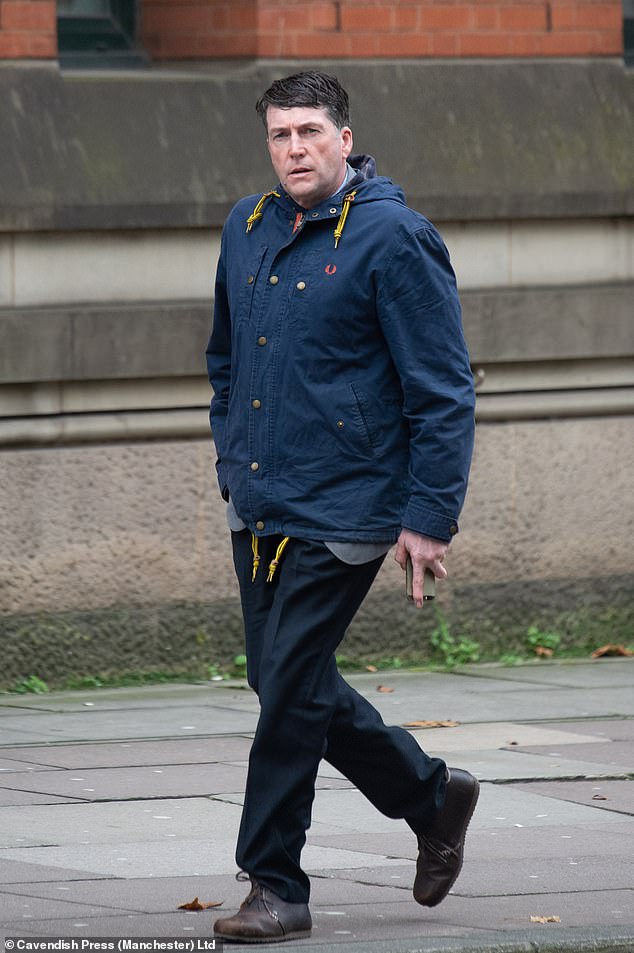 ‘There is no dispute he had been using his mobile phone but he says he was using the phone on handsfree,’ Mr Hall said.

‘At 5.41pm and 40 seconds, the traffic lights turned to red at a time Mr Sammon’s van was travelling at 24mph.

‘He could have stopped, there was enough time and distance to have stopped prior to the junction.

‘If he looked to his right a view of the traffic would have been available to him. It’s also agreed the junction was well illuminated and it’s agreed that there were no vehicles or environmental factors that would have obstructed Mr Sammons view of the eight traffic lights.

‘But his van collided with the motorcycle and Mr McGovern was not presented with a realistic opportunity to avoid the collision.

‘The van showed no evidence of emergency braking and Mr McGovern became trapped underneath the vehicle. 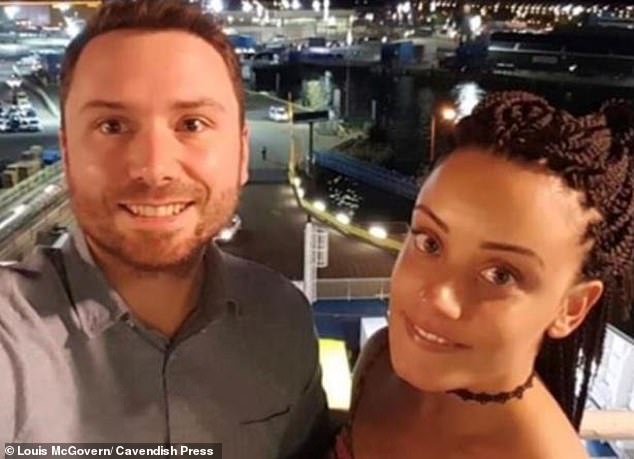 Louis McGovern pictured here with his partner Lauren James. The ‘much loved’ motorcyclist was mowed down by Kurt Sammon in 2019

Sammon told those at court that he recalled the traffic lights being green, and that he did ‘not see’ the motorcyclist – who he earlier accused of speeding.

Mr Hall continued: ‘It is not suggested that the motorcycle was being ridden inappropriately for the road or the conditions.

‘At the time of the collision, the traffic light controlling Mr Sammons was on red for 4.8 seconds.’

Mr McGovern was taken to Salford Hospital where doctors tried in vain to save him after he suffered a traumatic brain injury, spinal cord injuries, 16 rib fractures as well as lacerations to the spleen and kidneys.

Sammon said he had been using his handsfree Bluetooth kit but also said he only used his phone when his car was stationary. 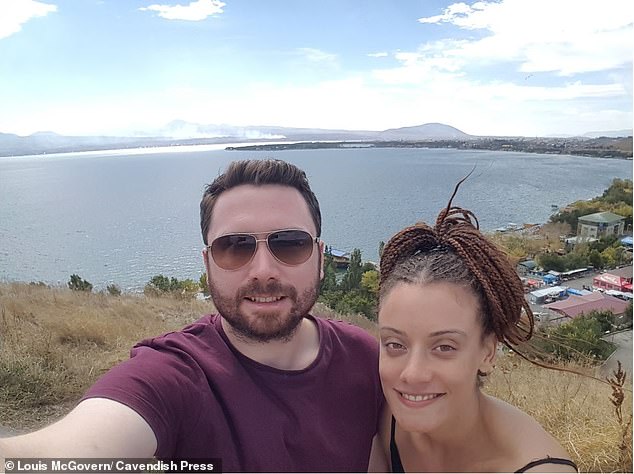 Less than five minutes before hitting McGovern (above), Kurt Sammon sent a WhatsApp message, received one himself and took a call on his phone

He was bailed but the judge told him he is likely to be jailed when he is sentenced. An interim driving ban is already in place.

Mr McGovern’s partner, Lauren James, said: ‘Louis was a very special man who was cruelly taken from us.

‘He was a much loved partner, son, brother, friend and colleague.

‘He absolutely adored his family and his friends.

‘Louis had the biggest heart, he lit up the room with his infectious smile and he would go out of his way to help anyone.

‘Louis was always there to lend a hand, make you smile or offer support.

‘A truly wonderful man, the best in fact. He will be greatly missed by all.’