There isn’t a piece of cutlery on the table when you sit down at Ricas Pupusas & Mas, a seven-month-old Salvadoran restaurant in Sunnyside, Queens. In El Salvador, where pupusas are the national dish, the palm-size stuffed-and-griddled tortillas are considered finger food.

To eat a pupusa the Salvadoran way, tear off a piece of sweet-scented masa, severing the strings of cheese still clinging to the tortilla, then use your thumb to secure a thicket of crunchy curtido slaw doused in tart tomato purée with each bite. You’ll get a knife and fork when your order arrives, but using them is optional.

Irma Vargas opened this modestly outfitted restaurant with her family in September, but she has been selling generously filled pupusas for much longer. In 2014, Mrs. Vargas and her mother, Maria Ramirez, set up a makeshift pupuseria in support of their church, La Luz del Mundo, in Jackson Heights. Their weekend fund-raising efforts were a quick success. 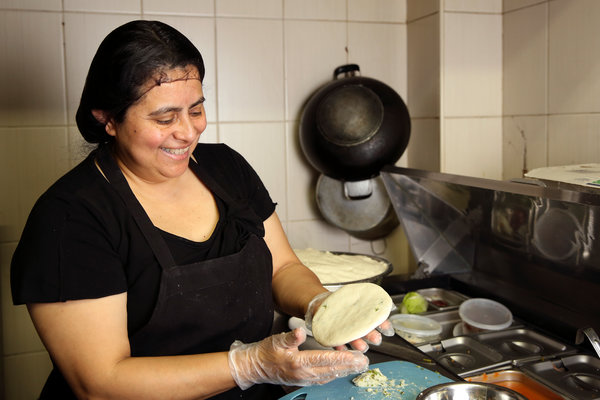 “We set up tables outside and people started noticing,” Mrs. Vargas said. “It got to the point where people waited an hour for our pupusas.”

Mrs. Vargas, a former customer service representative for an insurance company, felt it was important to cook for the community. Eventually, she found a vacant storefront in nearby Sunnyside where she could sell pupusas year-round, and named it Ricas — Spanish for rich, or delicious.

“I never in a million years thought I would have a restaurant,” Mrs. Vargas said. “I feel so blessed.”

Unlike the flash-fried pork skin or pork rind of the same name, Salvadoran chicharrón requires time. A hulking pork shoulder is broken down and pan-fried with woodsy oregano. The meat is bolstered with a small harvest of tomatoes, onion, green pepper and garlic, then the mixture is ground into a sumptuous paste, which is simmered for hours.

The recipe comes from Ms. Ramirez, who is known to stop by the kitchen to make sure the chicharrón tastes good. Her quality control is working: The pork is deeply seasoned, and saucy without being soupy.

Ms. Ramirez will turn 72 in September. As she spends less time in the restaurant, more of the kitchen duties fall to Mrs. Vargas and two of her daughters, Amy and Abby. Occasionally, the three generations tend the restaurant side by side. (Mr. Vargas’s husband, Daniel Vargas, helps out when he isn’t driving for Uber.)

It’s worth noting that Mrs. Vargas will customize any pupusa with the ingredients on hand. Sautéed mushrooms and flecks of prickly jalapeño sheathed in more of that buoyant cheese was one rewarding ensemble. If any cheese escapes, as you secretly hope it does, it may bubble and burn on the griddle, turning into coins of chewy cheese-candy.

No pupusa is complete without the curtido, a perky cabbage and carrot slaw, an essential palate cleanser. Mrs. Vargas stores hers in an oversize plastic tub, where the sharp edges of vinegar and oregano mellow as they age. Less necessary is the hot sauce, a merciless blend of chile de árbol and water.

It’s easy to fixate on pupusas, but the name of the restaurant promises more. Mrs. Vargas makes a small selection of tamales and tacos (Mr. Vargas is Mexican) filled with richly seasoned meats. The crisp-edged chorizo is so popular that she is thinking of offering it in a pupusa. An ever-changing daily special is also available. On one of my visits, there was carne asada; the voluptuous strip of charred beef was remarkably well-seasoned and juicy.

Depending on the day, the glass case in the spare dining room will display a different assortment of desserts. When Ms. Ramirez has been in the kitchen, there is usually a bin of flat, golden loaves. These are Salvadoran quesadillas: cheesy, pound-cake-like delights that outshine those other quesadillas in every way.

Mrs. Vargas revives the cake in the oven before it’s ready to eat, transforming the firm blocks into supple, glistening squares. The sweet scent of butter is interrupted by a cheesy, mouthwatering tang. Rice flour is the secret to the quesadilla’s beguilingly springy texture.

In El Salvador, the quesadilla is eaten at breakfast. I would eat it anytime.

This information was last updated on June 3, 2019