Victoria’s vast network of regional and rural school buses could be opened to the general public, with advocates arguing the move would help job-hunting youth, the elderly and families on low incomes get around.

But regional schools are dubious about the proposal, warning that allowing adults to mix with children on school buses would increase the risk of child abuse and undermine the high level of parental confidence in school bus services. 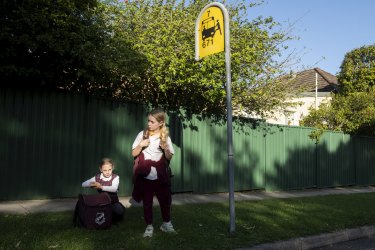 The State Parliament will investigate opening up the regional and rural school bus network to the general public. Credit:Rhett Wyman

A Victorian Parliamentary inquiry into making it easier for the general public to ride on school buses will begin on Tuesday.

Rod Barton, the upper house Transport Matters Party MP who pushed for the inquiry, said there were more than 1000 publicly funded school bus services in the state that could benefit many people who do not own cars and live in regional communities starved of public transport options.

Allowing other people to catch the buses would not detract from their primary purpose of getting children to and from school, he said.

“They’re school buses, that’s their first priority. But if they’ve got underutilised seats, people should be able to book and jump on them as well.”

Regional and rural schools have already rejected the idea, raising a host of concerns about adults using the same buses as unaccompanied children.

“The safety of students while travelling on this service must be paramount. This is considered to be the biggest barrier to the proposed change,” regional schools alliance the Country Education Partnership said in its submission.

The state’s three regional Catholic education dioceses warned child safety would be “seriously compromised” if buses were opened to the wider community.

But Mr Barton said their concerns about child abuse were unfounded.

“I absolutely understand people’s concerns but we’ve got to remember there are millions of kids around this country every morning [who] get on buses, trains, trams, ferries and they’re not all getting kidnapped by paedophiles,” he said.

Kylie Eicke, a resident of Loch Sport in Gippsland, said her 18-year-old son had been forced to give up his apprenticeship because he did not have a driver’s licence.

“I think people should be able to use school buses, not just on a casual basis, but if they need to use it regularly to get to work [and] study,” she said.

She said those wanting to use a school bus service could apply and be vetted.

The Victorian Principals Association gave qualified support to the proposal, so long as the extension of school bus services to the general public did not delay schoolchildren from getting to and from school, nor create child safety risks.

“One strategy to achieve this … is to reserve the first two to three rows of seats in each bus for members of the general public,” association president Andrew Dalgleish said.

“Signage to this effect would need to be placed in plain sight to bolster the authority of the bus driver to enforce this rule.”