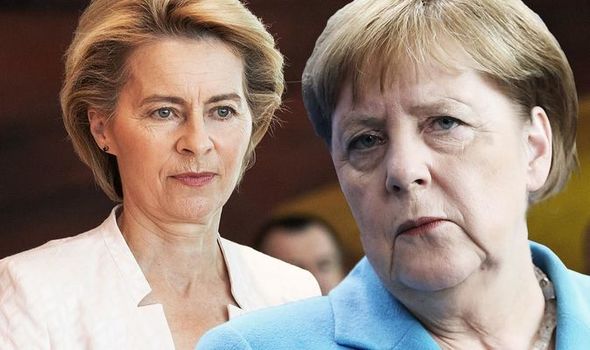 The European Parliament is due to vote next Tuesday on whether Ms von der Leyen, Germany’s defence minister and a conservative ally of Chancellor Angela Merkel, should succeed Jean-Claude Juncker as head of the EU. Ms Von der Leyen’s nomination by EU leaders has infuriated the Social Democrats (SPD), Merkel’s coalition partners, who feel aggrieved that the leaders ignored the lead candidates from the main parliamentary blocs in their horse-trading over top posts.

Mrs Merkel said the coalition situation “is not easy”. She was the only EU leader to abstain in a vote last week on an EU top jobs package after she consulted the SPD, which rejected the deal.

Ms Von der Leyen is currently lobbying lawmakers in the European Parliament to confirm her as Commission chief. The Socialist grouping to which the SPD belongs has 154 of the assembly’s total 751 seats, not enough alone to block her.

In a damninh paper, the SPD presented what it thought were Ms von der Leyen’s policy and leadership failures as defence minister, highlighting a scandal over the awarding of contracts, her alienation of the army top brass and gaps in the military.

The document read: “From the very beginning, she overestimated herself.”

A spokesman for the Defence Ministry declined to comment on the paper.

The paper is sure to inflame tensions in the coalition, already running high after former SPD leader Sigmar Gabriel suggested the party could quit the ruling alliance over Ms von der Leyen’s nomination as European Commission chief.

The SPD is plumbing new post-war depths in polls as a result of its decision, deeply unpopular with supporters, to prop up Mrs Merkel’s government and is divided over whether to stay in the coalition for another two years.

Under a sub-heading “Lack of support in the Bundeswehr”, the SPD took aim at Ms von der Leyen’s 2017 attack on “weak leadership” in the armed forces after an officer was arrested on suspicion of planning a racist attack to frame refugees.

The paper read: “Soldiers of higher ranks were horrified.

“It took weeks to calm the internal critics. Nevertheless, there is still talk of alienation between the minister and the Bundeswehr.”

The SPD  said of her efforts to fix gaps in military readiness, Ms von der Leyen had failed to make significant improvements and that the Bundeswehr was still “in a shabby state”.

Less than half Germany’s Eurofighter and Tornado fighter jets and none of its six submarines were ready for combat in 2018, a parliamentary report said in January.

The SPD paper also pointed to a “cost explosion” in the refurbishment of a military training ship, for which it said: “Ursula von der Leyen has political responsibility.”

Martin Schulz, former SPD leader, has attacked Ms von der Leyen “our weakest minister.” But Katarina Barley, who led the SPD’s campaign for elections to the European Parliament in May, has said the coalition will not collapse over her nomination.

The nomination gives Mrs Merkel the opportunity to secure a close ally at the top of the EU who will outlast her. The current parliamentary term is due to run until 2021, which is when Mr Merkel plans to stand down.

An end to the ruling coalition could yet be precipitated by regional elections in three eastern states in the autumn.

Recent polls show the SPD is set to perform poorly.