Paris/Madrid: The coronavirus is spreading even faster than it did during the first phase of the pandemic, a French government adviser said on Friday, as authorities across Europe scrambled to try to contain the disease once again racing through the continent.

France, which is set to pass 1 million cases after posting a record daily total of more than 41,000 on Thursday, has been one of the countries hardest hit in the second wave and has imposed curfews across much of the nation. 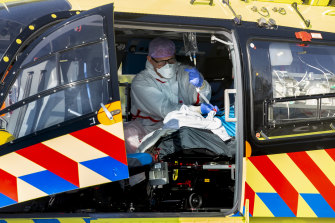 A COVID-19 patient is flown from the Netherlands, where hospitals have been swamped with virus patients, to Germany for treatment.Credit:AP

COVID-19 patients occupy nearly half of all of France's 5000 intensive care beds and its well-regarded health system has been showing increasing signs of strain.

"The virus is circulating more quickly than in the spring," epidemiologist Arnaud Fontanet, who sits on the Scientific Council advising the French government, said.

The disease is in resurgence all over Europe, where daily reported cases have more than doubled in 10 days, crossing 200,000 daily infections for the first time on Thursday, according to a Reuters tally.

"We are all afraid," said Maria, a 73-year old pensioner in Dolny Kubin, Slovakia, where officials were piloting a testing scheme the government plans to roll out across the whole country of 5.5 million. "I see what's happening and it is terrifying."

Around the continent, further restrictions are being planned by governments desperate to avoid a repeat of the blanket lockdowns that brought a measure of control in March and April at the cost of shutting down their whole economies.

Belgium, one of the worst-hit countries, whose foreign minister Sophie Wilmes went into intensive care this week, tightened restrictions on social contacts on Friday and banned fans from sports matches.

Poland, another of a string of countries to report record daily case increases, said it would close restaurants and bars for two weeks and limit public gatherings to five people.

In the Netherlands, a COVID-19 patient was flown from Flevohospital in Almere, 30 kilometres east of Amsterdam, to a German intensive care unit on Friday, the first such international airlift since the global pandemic first threatened to swamp Dutch hospitals in the spring.

In Spain, which passed the grim 1 million case milestone earlier this week, two regions, Castilla and Leon and Valencia, urged the central government to impose night-time curfews quickly to stem the spread.

Official data shows Spain already has the highest number of cases in Europe but the real picture may be even worse, according to Prime Minister Pedro Sanchez, who said a nationwide antibody study suggested the actual total may be more than 3 million.

"If we don't follow precautions, we are putting the lives of those we love most at risk," Sanchez said in a televised address. "What we have to do is reduce mobility and social contact. There is no other solution."

How long the resistance to lockdowns will last is uncertain. The governor of Campania, the southern Italian region around Naples which has imposed a curfew and shut schools, announced plans for a total lockdown, saying "half measures" were not working.

"It is necessary to close everything, except for those businesses that produce and transport essential goods," Vincenzo De Luca said.

While health services have not so far been overwhelmed to the extent they were in the first wave, medical authorities have warned of a likely surge in demand for intensive care beds as colder weather forces more people indoors and infections spread.

The wave of public support seen at the start of the crisis has steadily eroded amid a welter of often confusing and contradictory public information on the latest restrictions and growing fears about the economic costs of the crisis.

The survey on Friday "adds to the evidence that the second wave of infections, and the new wave of containment measures, is taking a heavy toll on the economy," said Jack Allen-Reynolds at Capital Economics, a consultancy firm.

Our weekly newsletter delivers expert analysis of the race to the White House from our US correspondent Matthew Knott. Sign up for The Sydney Morning Herald‘s newsletter here, The Age‘s here, Brisbane Times‘ here and WAtoday‘s here.