Swimmers have headed to the coast for Christmas Day dips across the country, with both humans and pets braving the cold waters while donning a variety of festive hats.

Congregating at Portobello Beach in Edinburgh on Christmas morning, swimmers wore full elf outfits and tutus to jump into the ocean.

People also gathered at Tynemouth Beach in the North East, where similar Christmas costumes were worn by swimmers.

There were around 450 swimmers taking part in the festive dip in Weymouth, all dressed in seasonal attire to take the icy plunge. 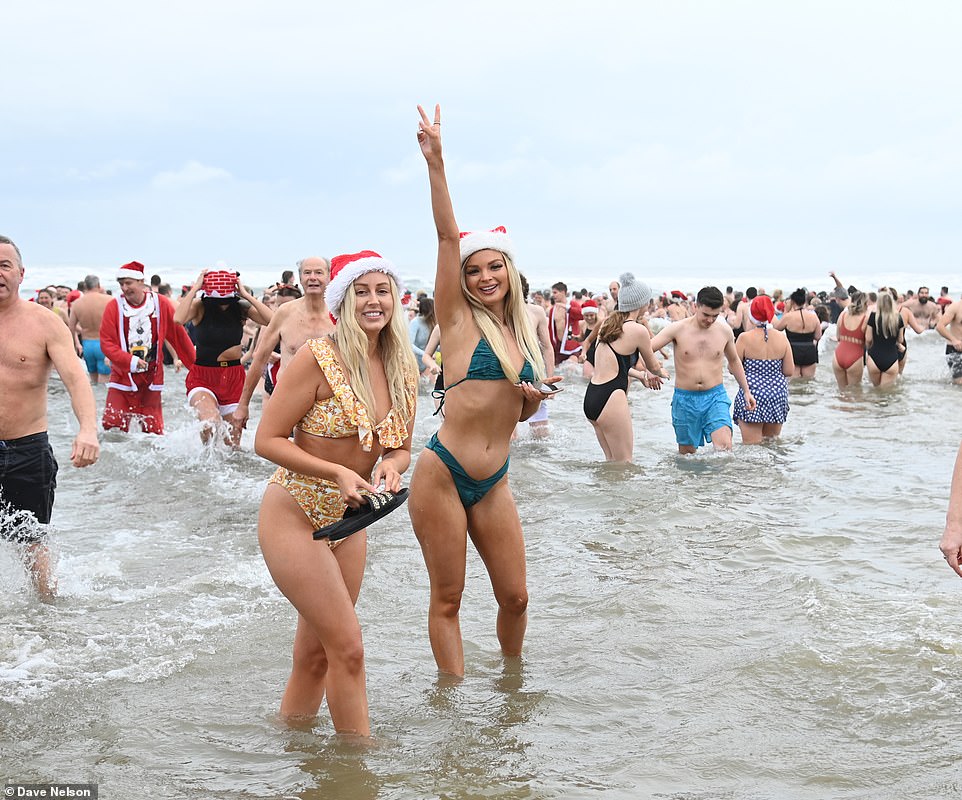 Happy Christmas from the sea! Two women with Santa hats ready for their festive dip at Crooklets Beach in Bude, Cornwall 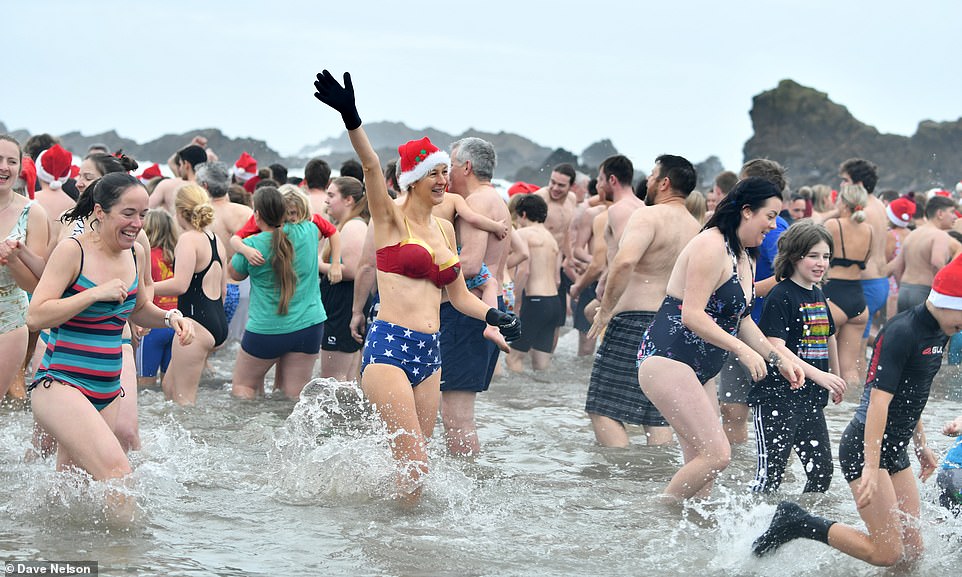 Revellers at Crooklets Beach in Bude, Cornwall, head into the chilly water for the occasion, wearing their swim gear as well as festive additions like Santa hats 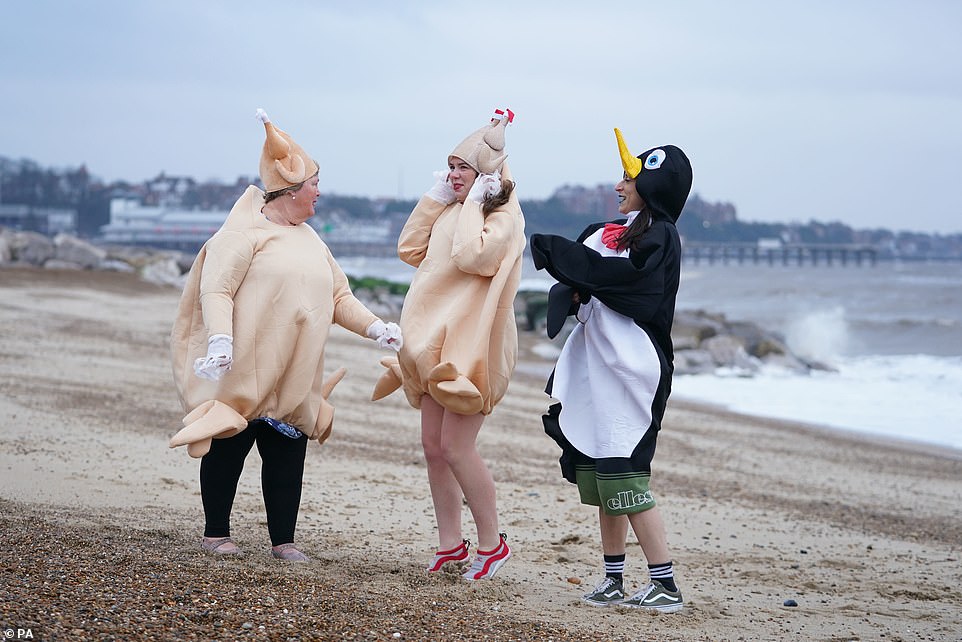 Disappointed swimmers dressed as turkeys and a penguin stand on the beach in Felixstowe, Suffolk, where the Christmas Day dip was called off due to adverse weather 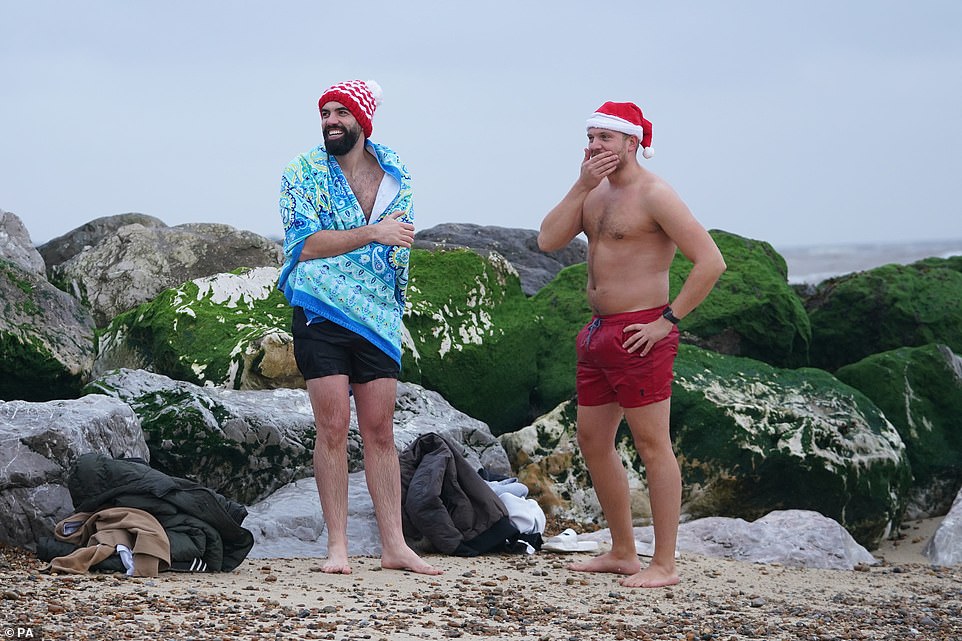 Swimmers in Felixstowe, Suffolk were sad to hear the news that the Christmas Day dip was cancelled because of bad weather 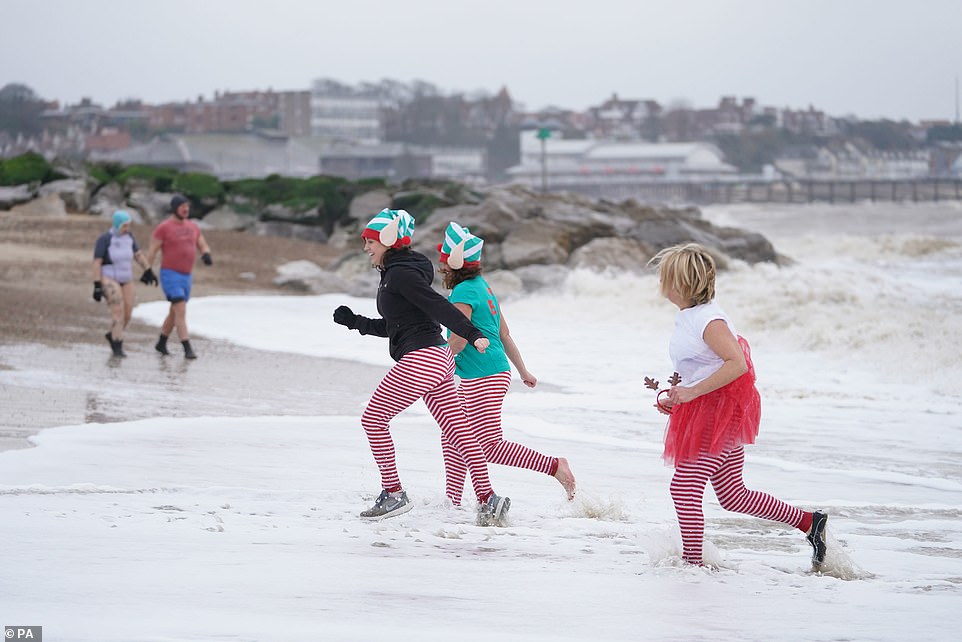 Swimmers wading in the shallow sea water to avoid getting completely drenched, with all three in red and white striped leggings, one in a red tutu and two in blue and white Santa hats

A group of women braved the chilly water together, holding hands as they entered the water.

However, due to bad conditions, the dip at Felixstowe, Suffolk was called off at the last minute, leaving many disappointed spectators and swimmers.

In a series of tweets, St Elizabeth’s Hospice, which was hosting the event, said their Christmas Day Dip was been postponed due to windy weather.

The organisation tweeted they were advised that the safety of the participants in the sea could not be guaranteed due to the adverse conditions. 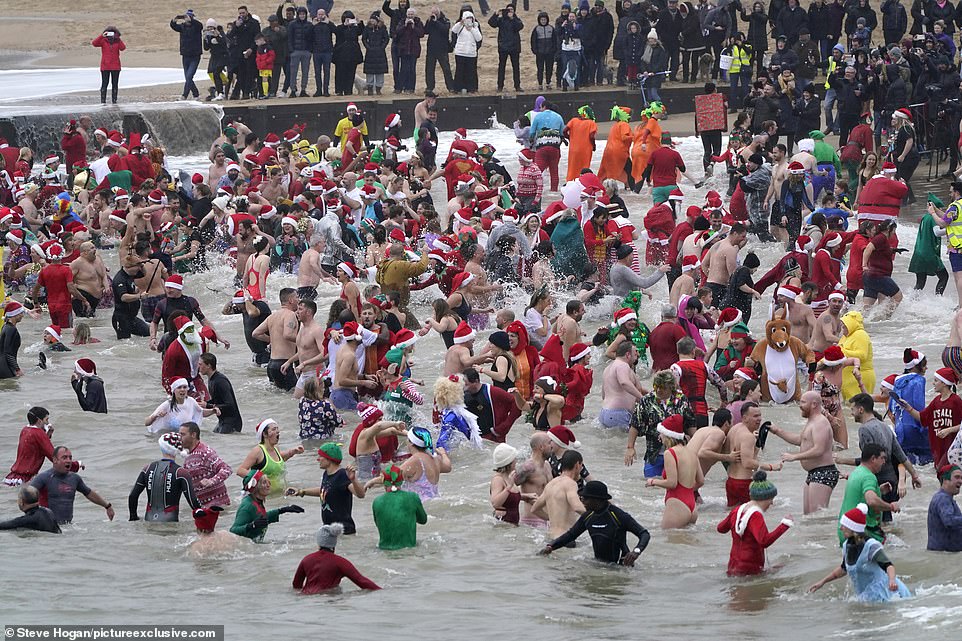 Over 750 people turned out to Bournemouth’s Boscombe Pier, Dorset, to raise funds for charity Macmillan Caring Locally who hope to make £50,000 on their 13th Christmas Day dip 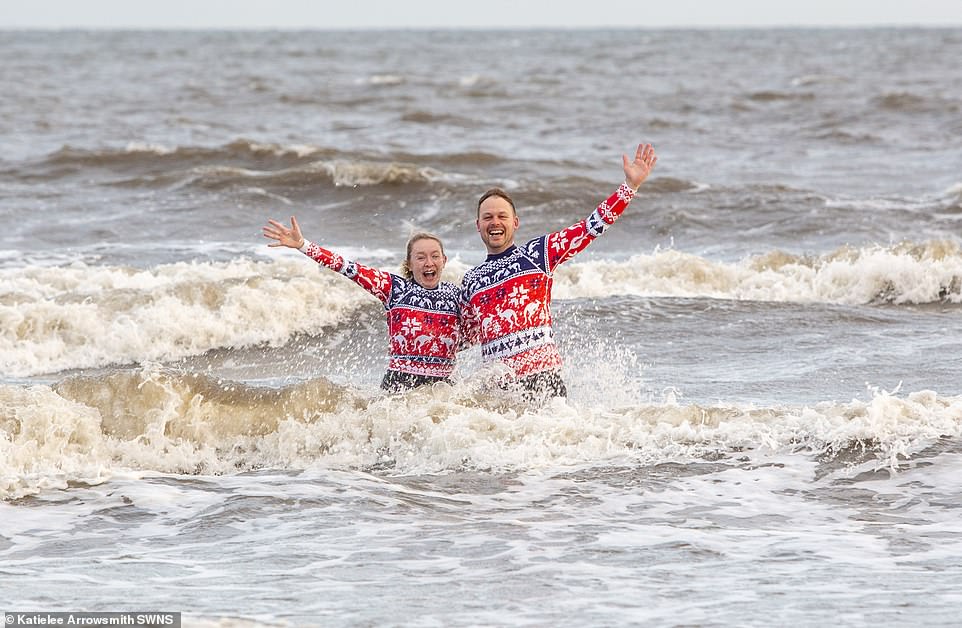 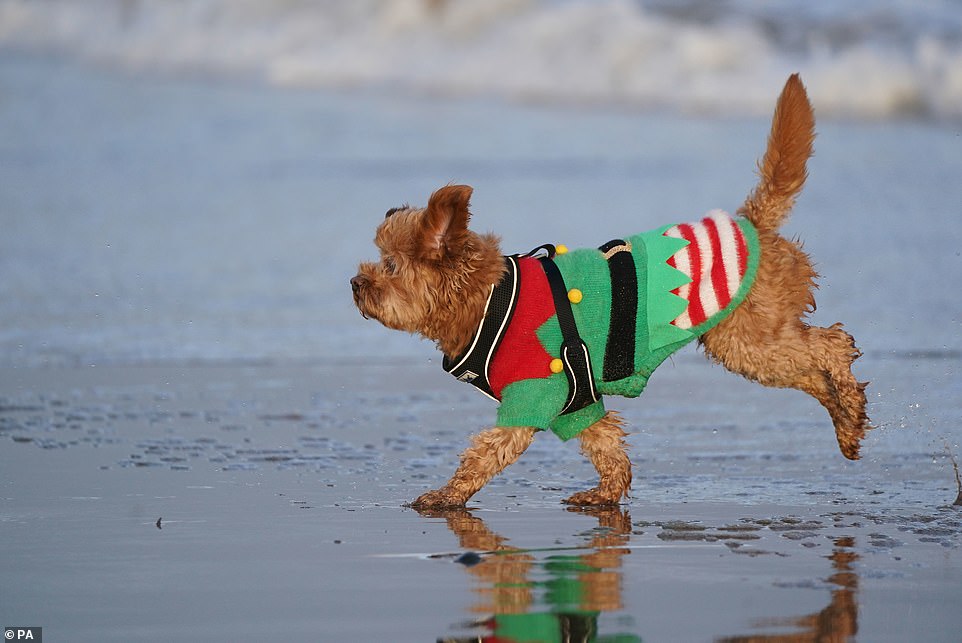 This festive pup wearing a Christmas elf jumper runs along the sand during the Christmas day dip at Portobello Beach in Edinburgh, Scotland 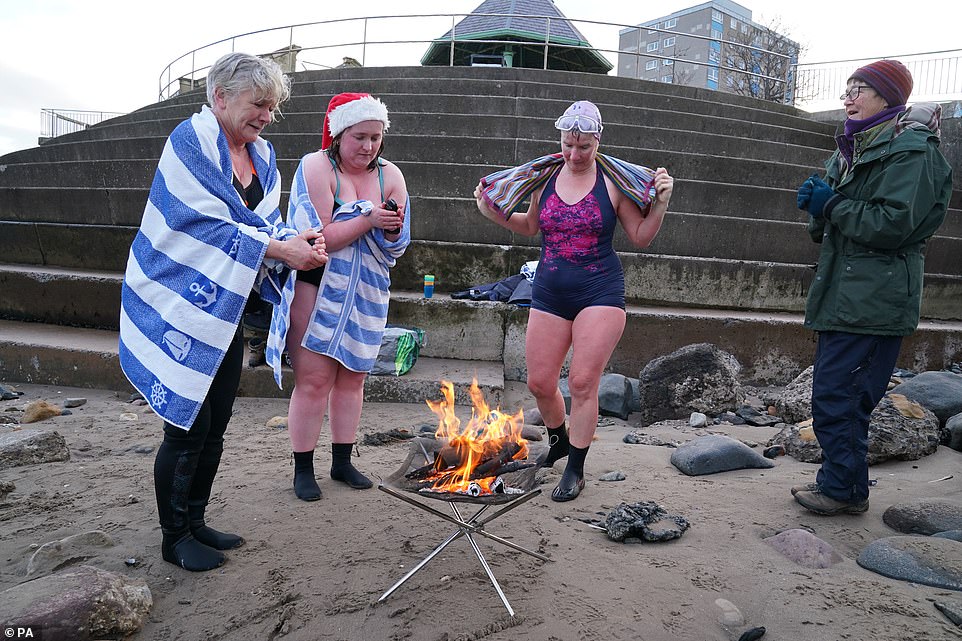 Warming themselves up with a campfire, Christmas Day swimmers at Portobello Beach in Edinburgh wrap themselves in towels after taking part in the festive tradition 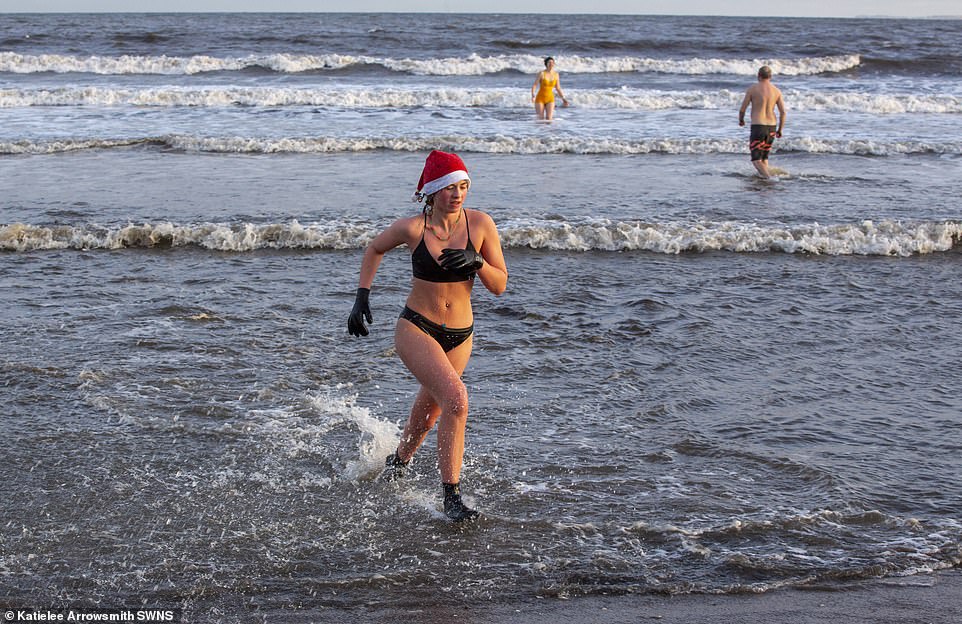 One woman running out of the water at Portobello Beach in Edinburgh, after braving the cold water for Christmas Day 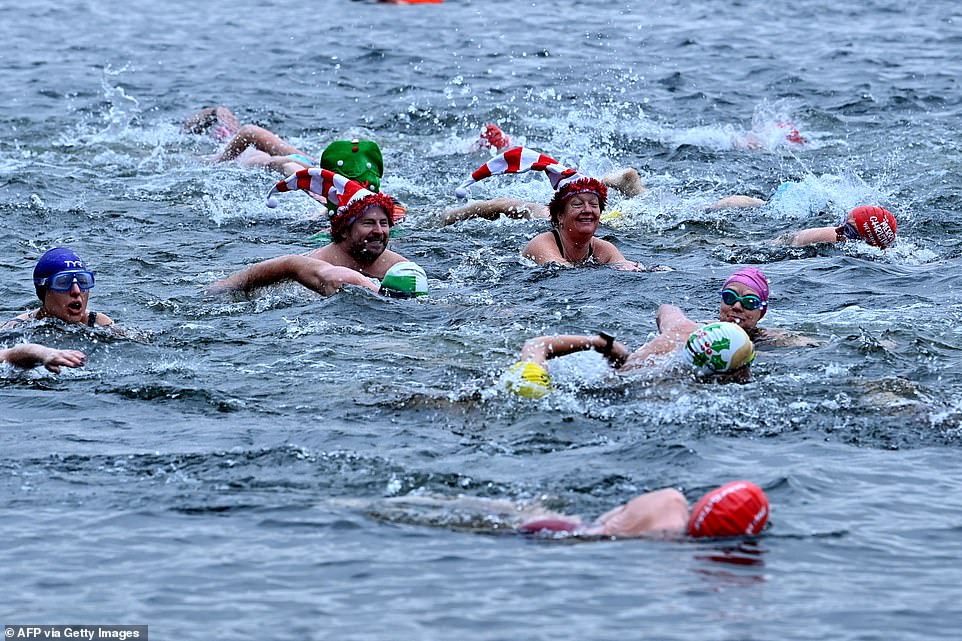 Grin and bare it: Swimmers with red and white hats, wrapped with tinsel on their heads, take part in the annual Christmas morning swim in the Serpentine Lake in Hyde Park 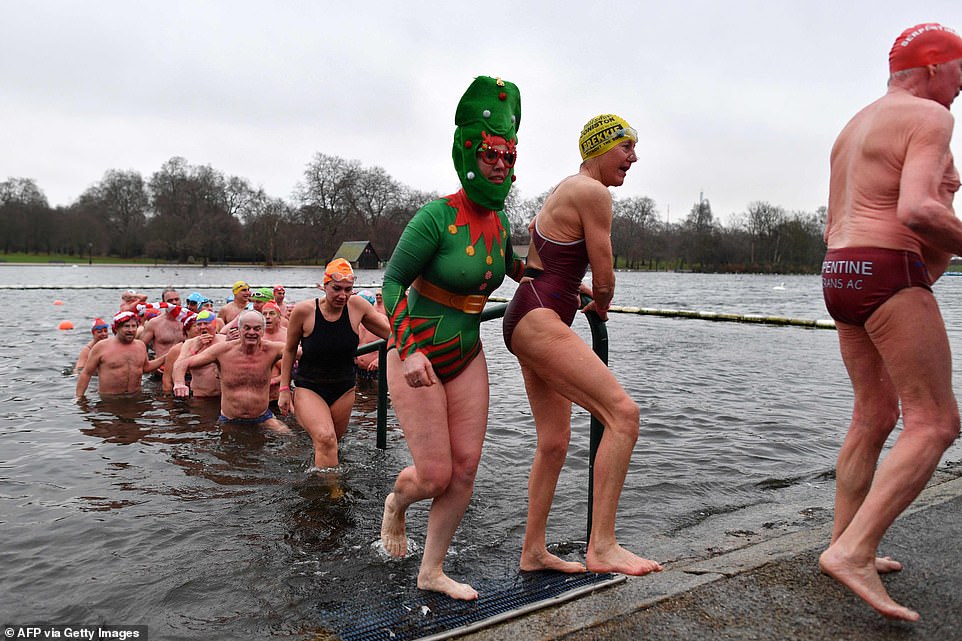 One swimmer wore a elf-themed Christmas swimsuit, with green and red details, a Christmas tree hat and finished off with some reindeer sunglasses 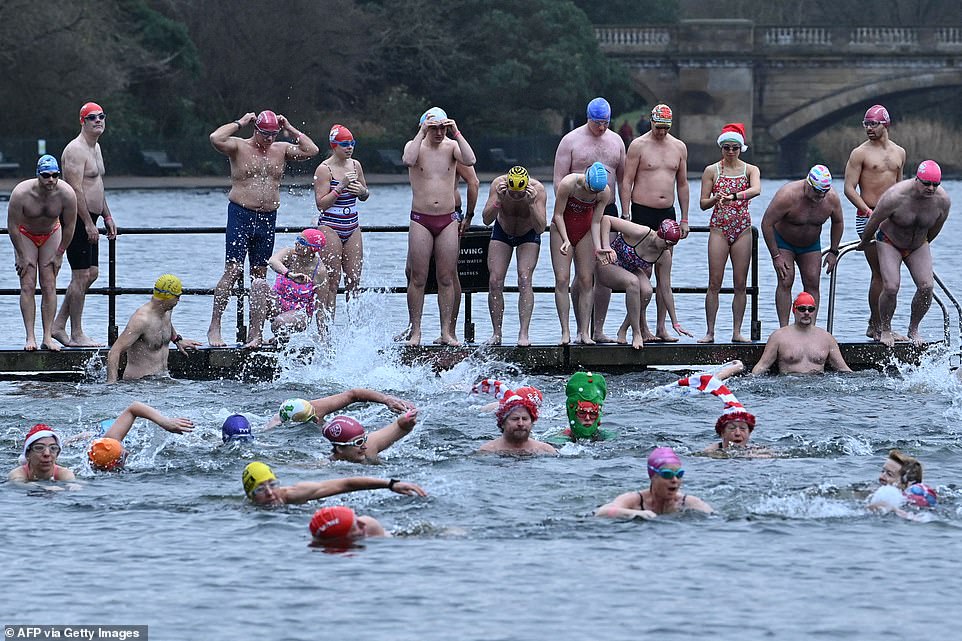 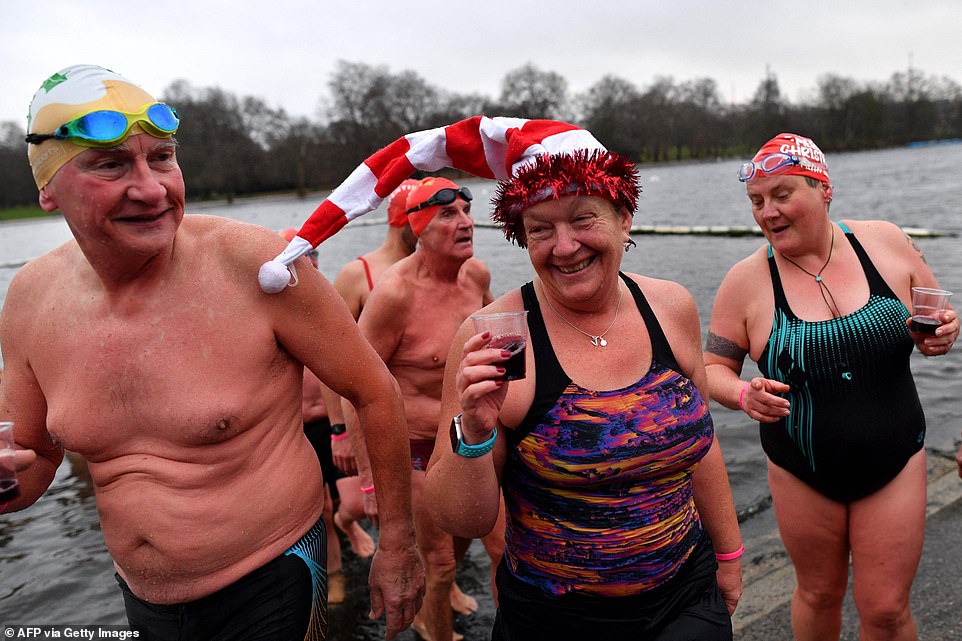 Drink to that: Those who took part in the Christmas morning swim in the Serpentine Lake were greeted on land with cups of red wine 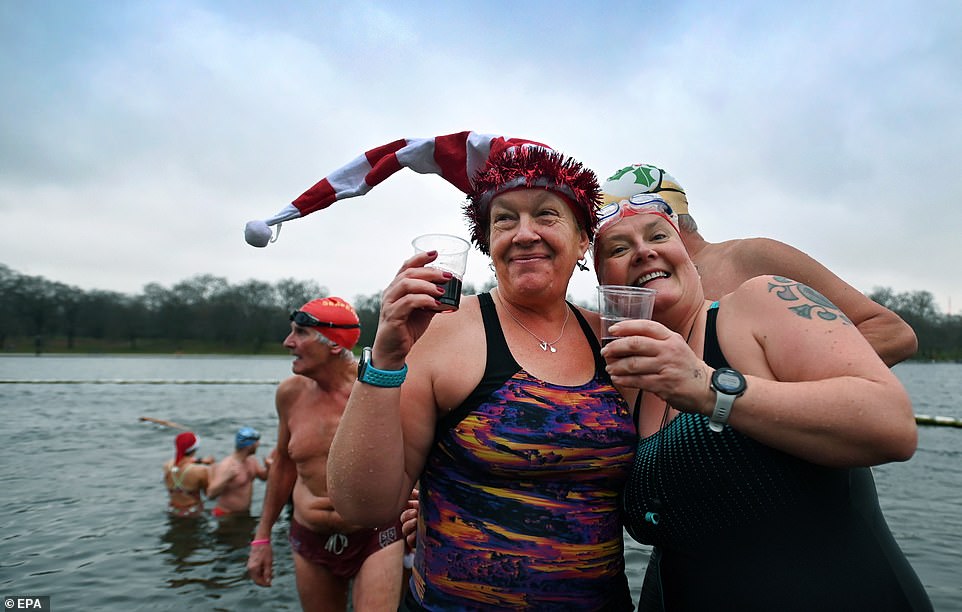 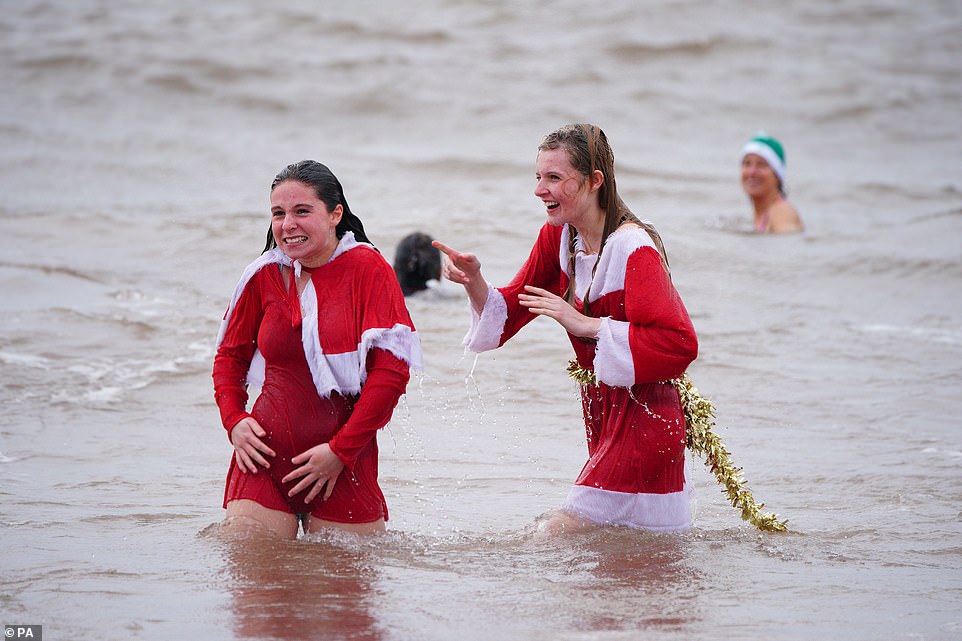 Drenched! Two women dressed as Mrs Claus, one complete with tinsel wrapped around her waist, leave the water after a swim in Exmouth, Devon 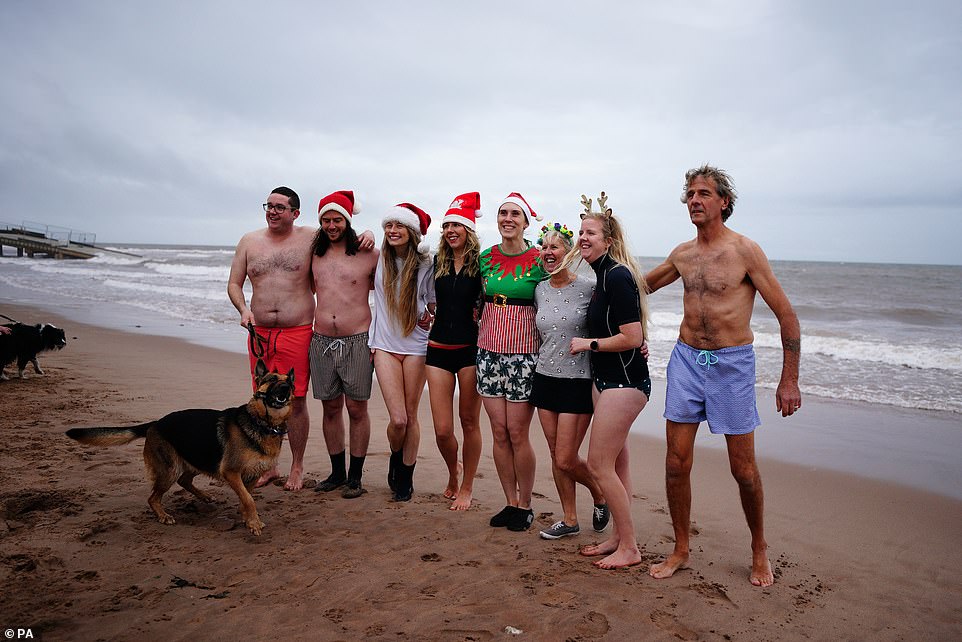 Swimmers posing for a photo before they take part in a Christmas Day dip in Exmouth, Devon, dressed in festive gear

It tweeted: ‘We are so disappointed that we have to make a change like this so close to the event date.

‘It is not a decision we have taken lightly and your safety will always be our number one priority’.

They added that they knew the postponement would be a ‘huge disappointment to many’ and that ‘attending the event is a family tradition and so many people were braving the cold in memory of their loved ones’.

Saying it was ‘truly sorry’ for the delay to the ‘iconic Christmas Day challenge’, the charity confirmed that those who intended to take part will have their registrations automatically rolled over to the new date once confirmed.

Before the cancellation, two swimmers wearing full clown costumes did take the plunge for a splash in the sea.

Among those who arrived for the Felixstowe swim were people dressed as turkeys, penguins and elves. 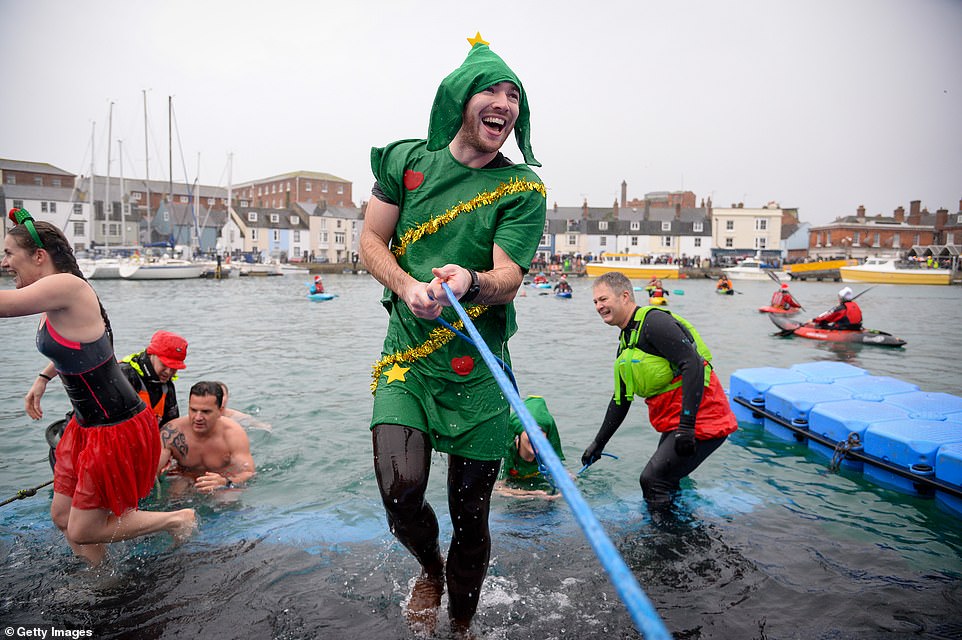 One man dressed as a Christmas tree, with a star on his triangular green hat to act as the top of the tree, complete with tinsel and pretend ornaments 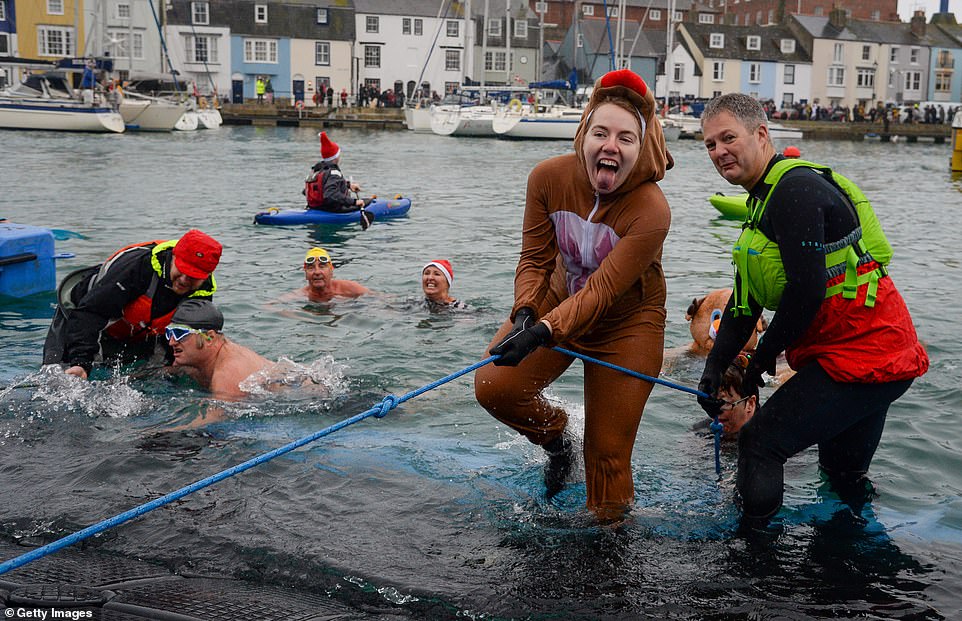 Thousands of people lined Weymouth Harbour to see the swimmers take part in the swim, which has become a landmark event for the town 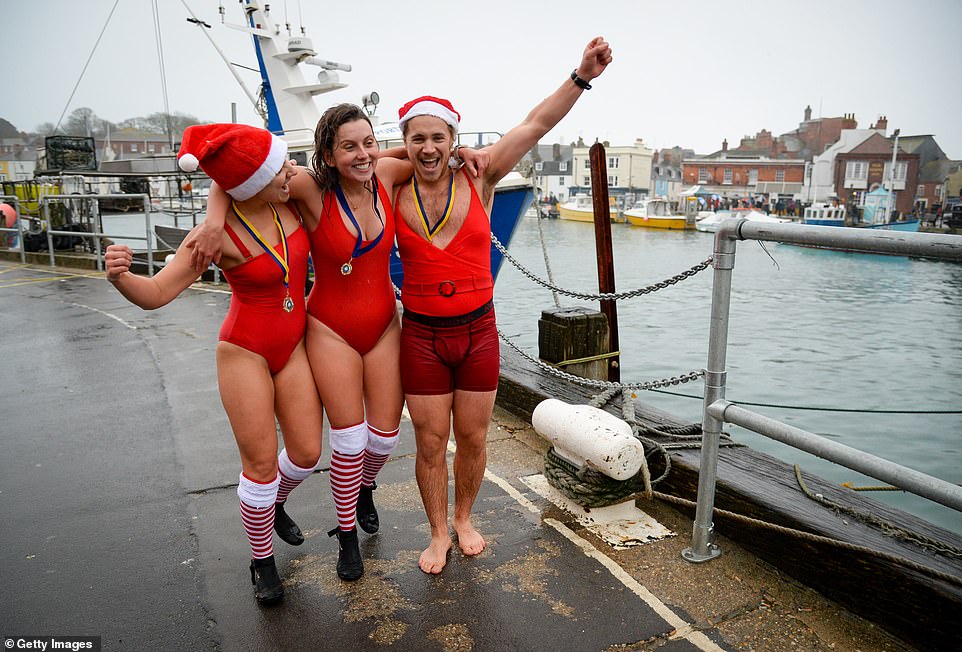 We did it! Cheers from these three participants who wear medals around their necks as a prize for completing Weymouth’s Christmas Day dip 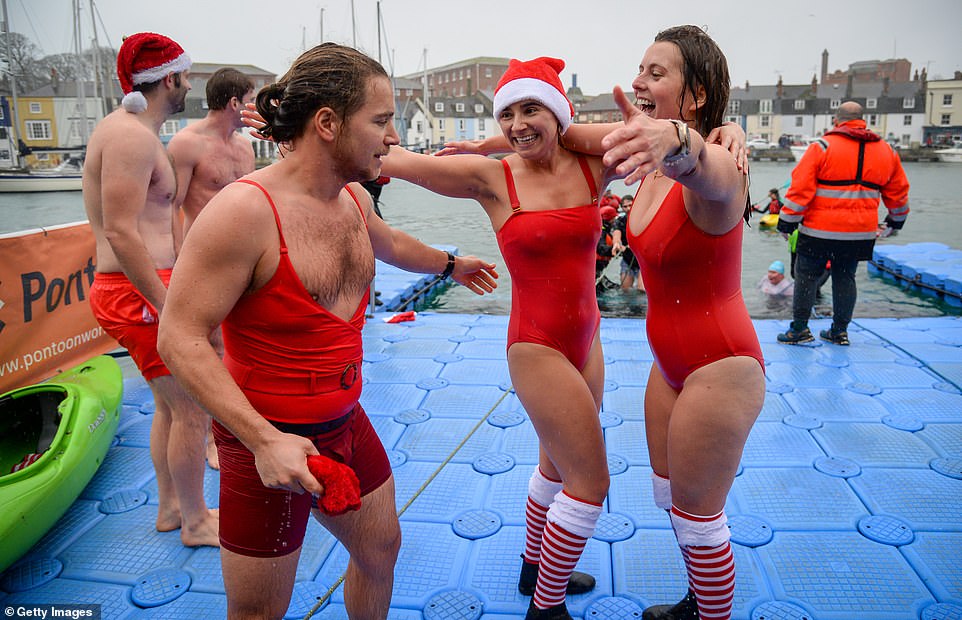 Celebrating the finish to their swim, these participants share a hug to say Merry Christmas after a chilly dip in Weymouth Harbour 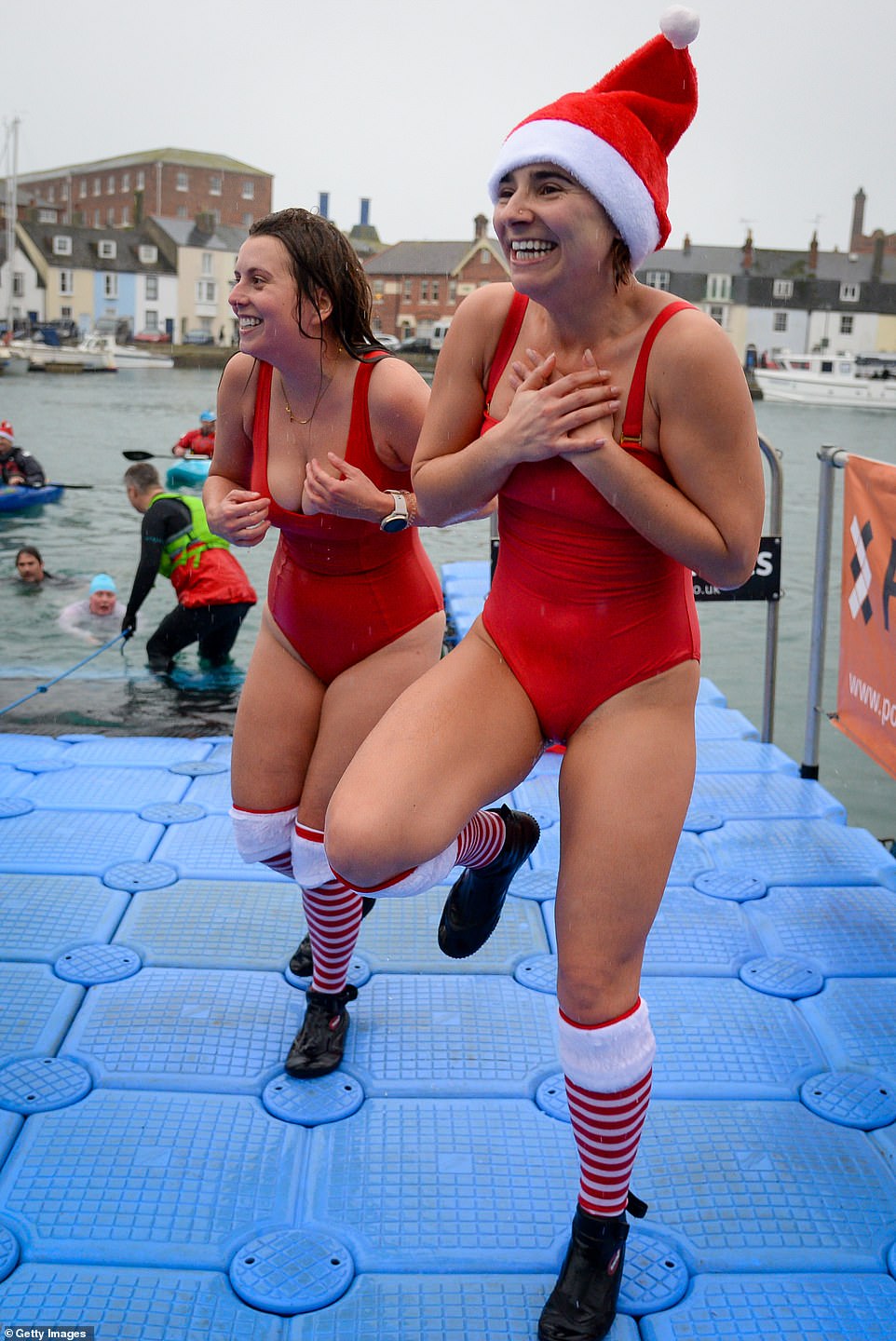 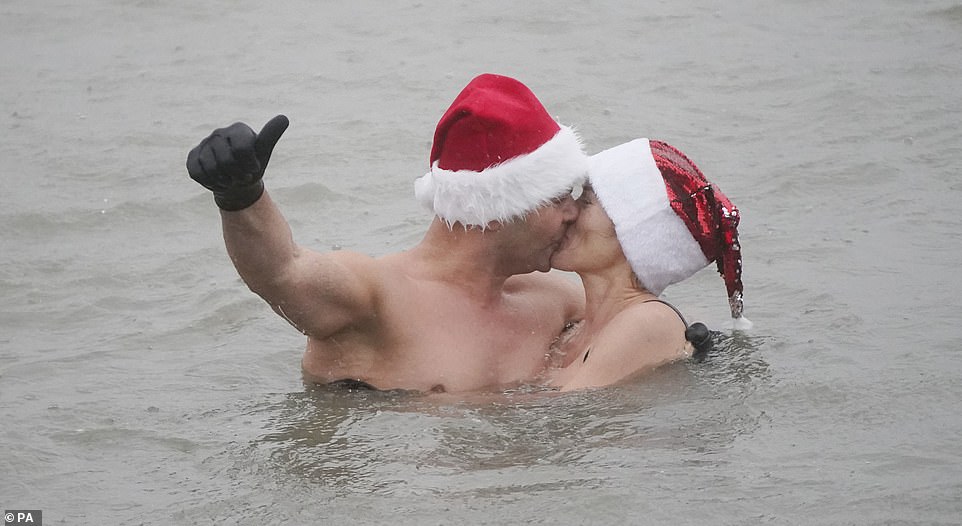 Arek Czajka and Lidia Smelz, from Poland, share a festive kiss during a Christmas Day dip at Sandycove beach, near Dublin, Ireland 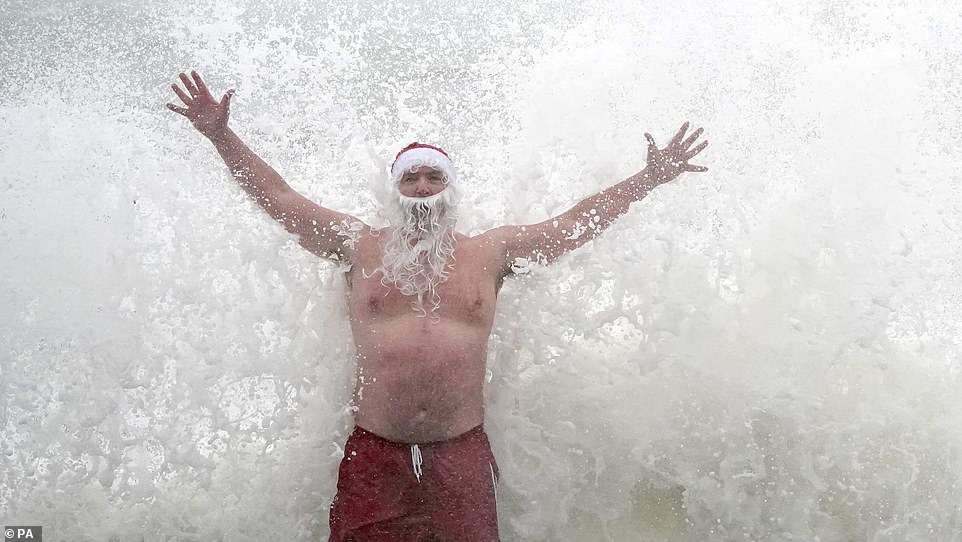 Patrick Corkery wears a Santa hat and beard as waves crash over him at Forty Foot, near Dublin, Ireland, during his Christmas Day dip

Over 750 people turned out, with many in fancy dress, for the festive dip at Boscombe Pier in Bournemouth, Dorset, for Macmillan Caring Locally charity hoping to raise £50,000 today.

After raising £250,000 on the swim in 2019, and with last years’ being cancelled due to the pandemic, lifeguards kept the hundreds safe as they braved the cold water down south.

Sea temperatures were around 9-10 degrees today, but that didn’t stop swimmers from taking part.

Organisers are putting the funds raised towards ‘Brick by Brick’, an appeal by Macmillian Caring Locally to build a new hospice to replace the Macmillan Unit at Christchurch in Dorset.

Thousands of people lined Weymouth Harbour to see the swimmers take part in the swim, which has become a landmark event for the town.

Swimmers at the Peter Pan Cup annual Christmas Day swim at the Serpentine Swim Club in London were lucky enough to enjoy a glass of red wine following their dip.