More than a FIFTH of medics across the world have developed PTSD and depression from fighting the Covid pandemic, research claims

A fifth of medics have suffered from PTSD and depression during the coronavirus pandemic, research has revealed.

London School of Hygiene and Tropical Medicine researchers analysed data on the mental health of more than 100,000 doctors, nurses and other healthcare workers living in two dozen countries.

Twenty-one per cent had developed depression and/or PTSD during the pandemic, and around 22 per cent suffered anxiety.

A separate study also published today said almost two-thirds of doctors, nurses and care home workers in the UK were depressed after the first wave.

Charities said the figures painted a grim picture of the impact of the pandemic on care workers, and urged ministers to provide them with extra support. 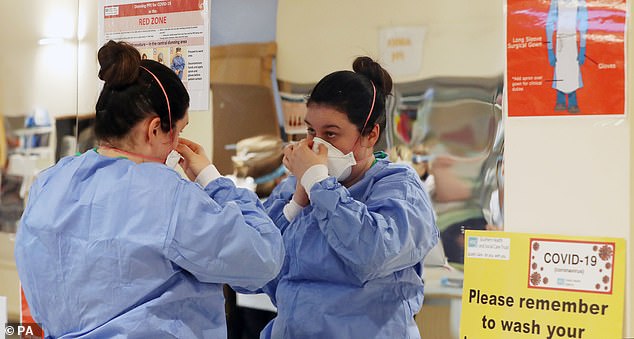 Almost a fifth of health workers suffered depression because of the pandemic, researchers said. Pictured is a member of medical staff at Craigavon Hospital in Northern Ireland

Almost two-thirds of NHS workers were depressed or had PTSD after battling the rising tide of coronavirus patients during the first wave, a study has found.

They found those in each profession were facing ‘clinically significant depression’, with as many as 58 per cent suffering from a mental health disorder.

The study’s sample was 92 per cent female and 90 per cent white, which the researchers said may have impacted the results.

Lead author Dr Talya Greene, a psychologist, warned: ‘We may be on the verge of a mental health crisis across the health and social care sector.

‘So, we need to make sure that specialist help is offered and accessible across all the different roles and settings.’

The study was published in the European Journal of Psychotraumatology.

They analysed the figures — which mostly came from China but also the Middle East, Europe and North America — to identify the levels of depression, PTSD and anxiety.

Experts warned this could heavily skew the global results because of the significant focus on one country. After an initial outbreak in Wuhan last January, China claims to have not suffered the cycle of national lockdowns seen in other countries.

Overall the global analysis, published in PLOS ONE, said the Middle East had the highest rates of depression among healthcare workers (34.6 per cent).

The lowest levels of depression among medics were reported in North America — based on one study — at 18.7 per cent.

‘The response would benefit from additional research on which interventions are effective at mitigating these risks.’

It comes as University College London researchers today said the UK’s health service is on the ‘verge of a mental health crisis’.

They surveyed more than 1,100 healthcare workers in the UK between May and July to assess their mental health. Results showed almost two thirds of those questioned had suffered from depression or PTSD after the first wave.

Hospitals have been ravaged by Covid, with the NHS forced to cancel thousands of operations last spring and winter to cope with spiralling admissions.

Psychologist Dr Talya Greene, the lead researcher of the UCL study, said: ‘We may be on the verge of a mental health crisis across the health and social care sector.

‘So, we need to make sure that specialist help is offered and accessible across all the different roles and settings.’

Responding to the reports the head of research at the Mental Health Foundation, Catherine Seymour, said: ‘These findings echo our own research in which we found healthcare workers have experienced higher levels of anxiety, depression, sleep problems and post-traumatic stress disorder during the Covid-19 pandemic as well as in previous pandemics.

‘Our research showed that healthcare workers rejected initiatives like clap for carers and the hero narrative, if not supported by concrete actions by government, for example adequate supplies of PPE.

‘Healthcare workers also told us that peer support was a key aspect of coping and helping to mitigate the mental health impacts.

‘We believe there is more that workplaces could do to formalise availability of peer support in health and social care settings especially as we enter the post-Covid recovery period.’