A financial trader was caught out checking his stocks and shares while driving after he was given away by a picture he boasted on Instagram to his 26,000 followers.

Lee Davis, 24, from Southampton posted the image that captured his speedometer in the background, which appeared to show he was travelling at 30mph, despite him claiming he was stuck in traffic.

The financial trader, who boasts about his six-figure salary and flash lifestyle in a series of pictures and videos on social media, was slammed by road safety campaigners. 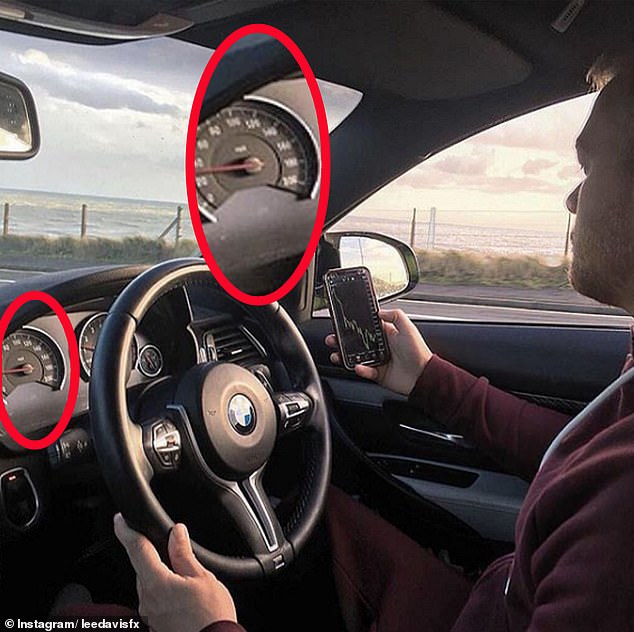 Financial trader Lee Davis, pictured checking his shares on his phone while travelling in his BMW at 30 mile-per-hour, regularly boast online about his wealth and luxury lifestyle 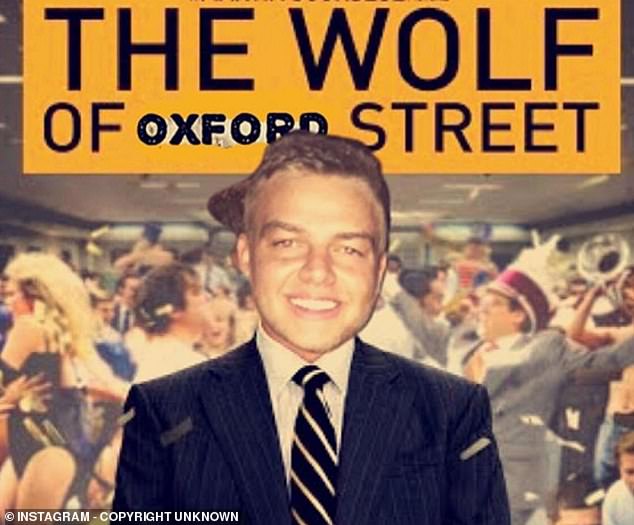 Davis, 24, from Southampton, compares himself on his social media profile to the Wolf of Wall Street 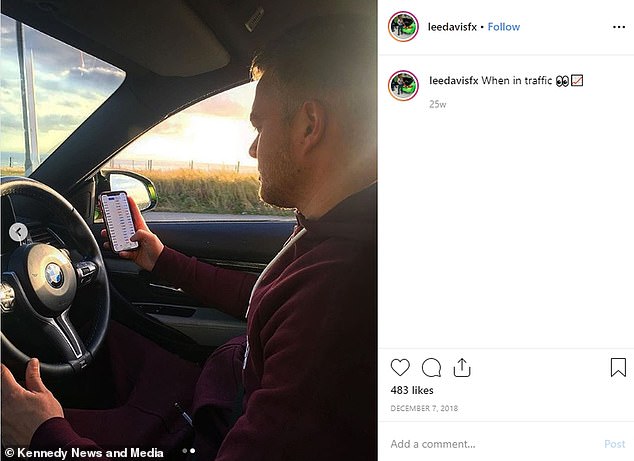 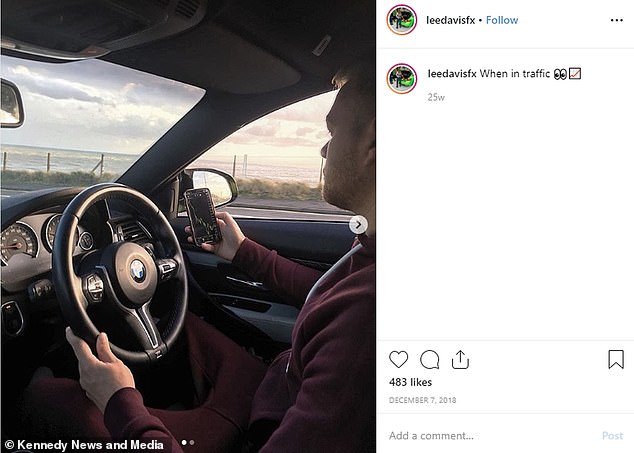 However, a second image shows the car’s speedometer reading approximately 30 miles per hour 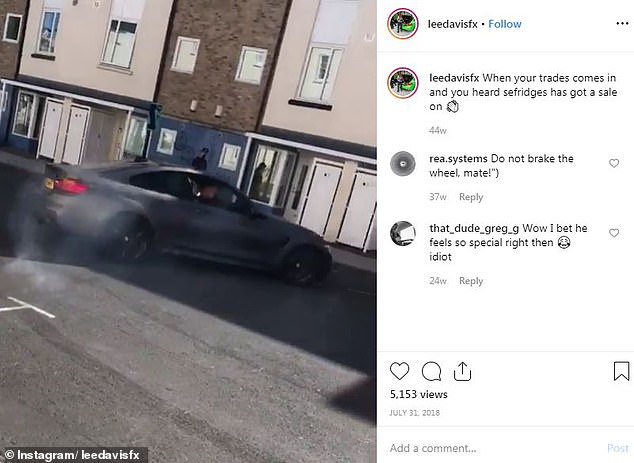 One video posted on Davis’ instagram feed shows him dumping the clutch on his BMW coupe and spinning around on the road, narrowly avoiding a pedestrian

Other images show him performing reckless manoeuvres, including weaving in and out of traffic and leaving tyre smoke behind his vehicle after bolting from a set of traffic lights.

Road safety campaigners described the videos and photographs as ‘reckless’ and could encourage copycats to act with equal stupidity.

In one video Davis films himself using a cash machine and bragging about his ‘easy money’ £65,000 bank balance, while in another he bites on a wad of notes.

The trader flaunts his visits to the Shard, Rolex watch, and jet-setting lifestyle in a bid to entice trading hopefuls to sign up to his own Forex Help Trading.

However Hugh Bladon, one of the founding members of the Alliance of British Motorists (ABD) today slammed Lee’s sharing of ‘irresponsible’ driving as encouraging ‘copycats’.

Footage also shows him skidding his car around on a residential street and narrowly missing a passing pedestrian – while joking that he ‘heard Selfridges has got a sale on’.

Mr Bladon, the ABD treasurer and also a retired army major, said: ‘The whole point of driving is that you should not be endangering other people, as well as yourself. To drive irresponsibly is just plain stupid.

‘To film yourself being an idiot just encourages other people to do copycat things as well. 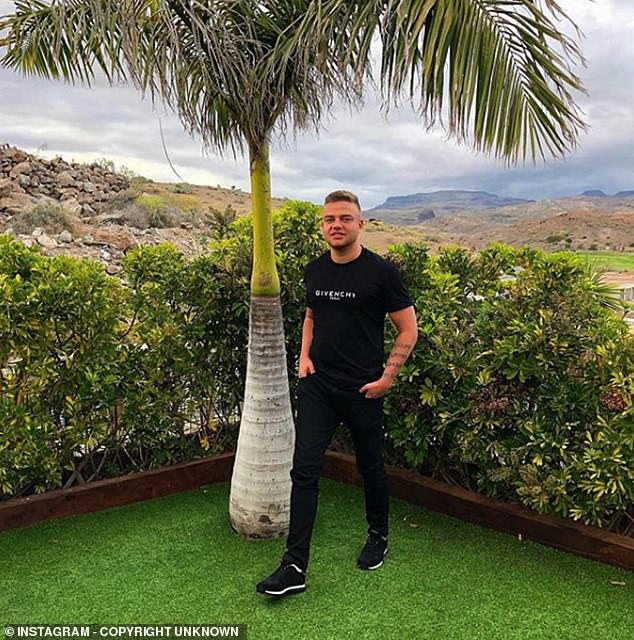 Lee Davis, pictured, claimed the photographs on his social media feeds are all old as he is currently banned from driving 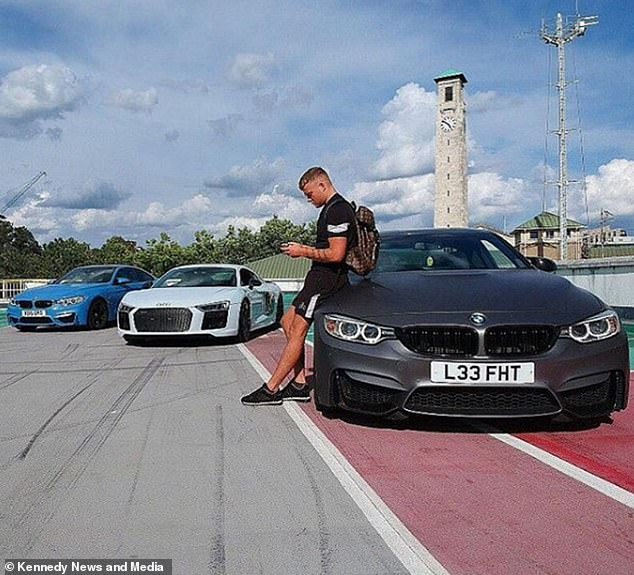 Davis, pictured, performed many of the manoeuvres in his BMW 3 series, pictured 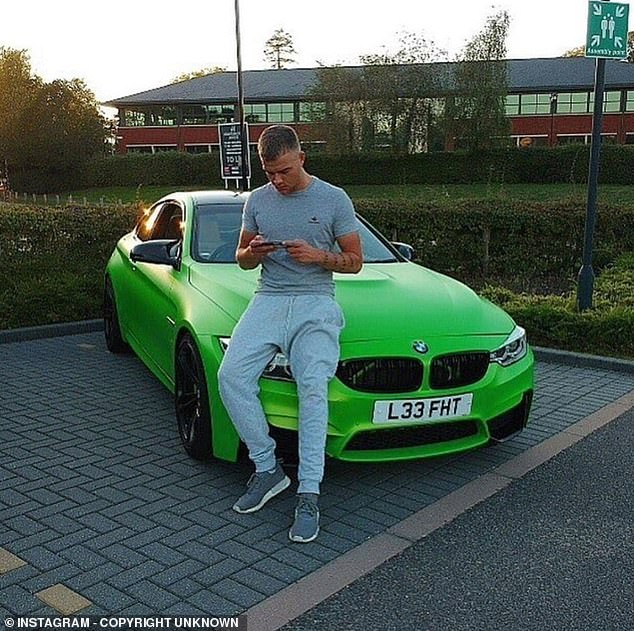 Davis, pictured, claimed a video of him performing a dramatic U-turn was not illegal as it was the same as doing a ‘three point turn but quicker’

‘That sort of thing is absolutely wrong. It would have been better if this bloke had been put into prison rather than just being banned.

‘I suppose if he was in prison then he could still put these things on social media.

‘It’s just plain stupid. I have no idea why people think it is so funny to do this sort of thing because it ends up costing people their lives.

‘The roads are dangerous enough as it is without people being encouraged to behave badly.

‘We just do not tolerate that sort of stupid behaviour. As far as we are concerned, it’s an absolute no-no.’ 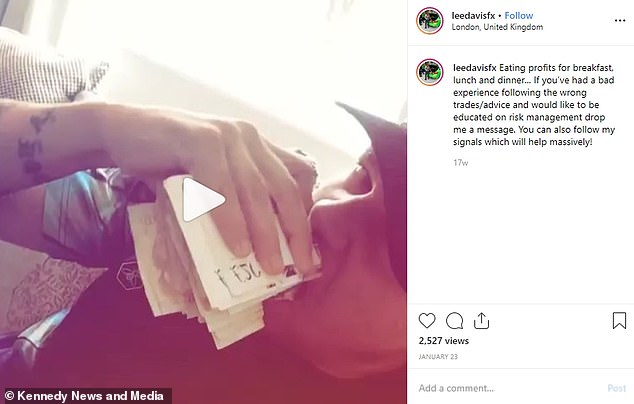 Davis, pictured, posted an image of him ‘eating’ a large wad of cash while trying to create demand for his services 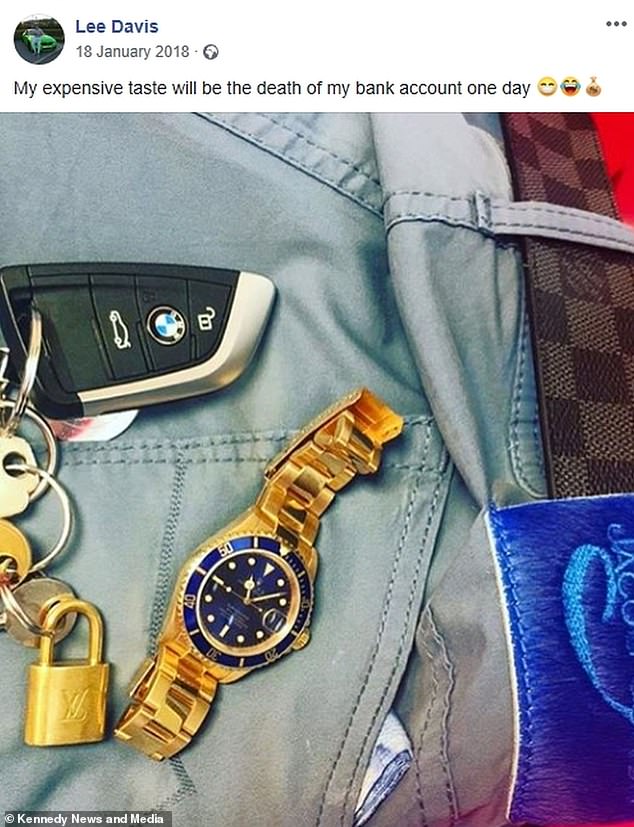 Davis claimed that although he appears in the photos and videos, another person posts and writes the captions for him.

He claimed to have no recollection of the photograph of him driving while on his phone, and admitted to recycling old photos because it gets attention.

Davis said: ‘This account is run by somebody else. They upload pictures of me and put a caption on whatever they think suits it.

‘I’ve got a nice lovely car and I want to put pictures up of it.

‘I do what I want. It’s my Instagram. It’s my cars. As I am banned, I will put pictures up of last year. Like I said, I’ve got someone runs my account and probably posting stuff as I speak now.

‘I’m in Marbella, I’m enjoying myself, I’ve already been banned from driving so nothing is going to come of it. It’s just f*****.

‘I have been banned for four months. There were pictures in my car going up yesterday.’ 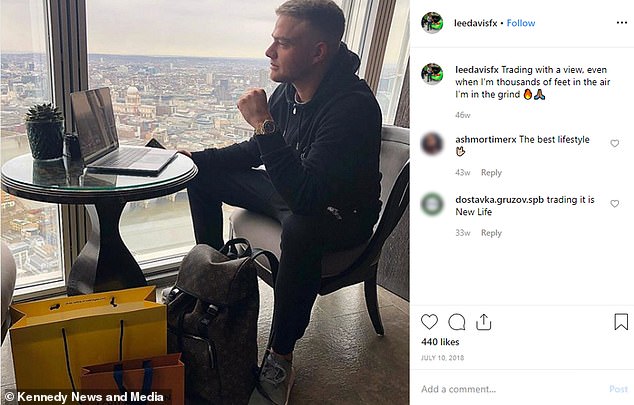 Davis, pictured, posted a photograph of him working while sitting at a table in the Shard 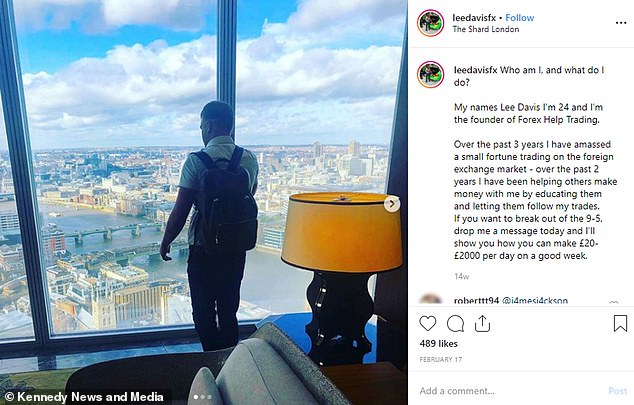 When quizzed on the video of him appearing to ‘drift’ the car and nearly hitting a pedestrian, Davis said he ‘was doing a three-point turn but quicker. That’s not an illegal manoeuvre’.

The Forex trader was banned from driving for two years in April after dashcam footage caught him driving on the wrong side while overtaking, before narrowly avoiding a collision with a traffic island.

Davis appeared at Southampton Magistrates’ Court in April and was disqualified from driving for two years, ordered to complete 150 hours unpaid work, attend an eight-day rehabilitation course and pay an £85 victim surcharge.

He had already faced a 19-month driving ban in March after he was caught drink-driving.

He will have to take an extended retest before he is allowed to drive again.