Australians whose foreign partners were barred from entering the country during the international border closure will have to wait for several months until general inbound tourism resumes before they can be reunited for good.

The federal government’s staged resumption of international tourism puts partners who have been unable to meet existing criteria at the back of the queue, behind parents of Australian citizens and permanent residents, skilled workers and international students. 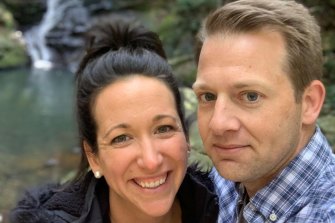 Australian Danielle Edwards and Darren Kacmar, from the US, are in a registered relationship but have been separated since early 2020 because of the international border closure.

Home Affairs Minister Karen Andrews told ABC Radio on Friday, “We will work to bring in international travellers as soon as we can, but the priority is Australians, followed by skilled workers, international students.”

Prime Minister Scott Morrison said a week ago, at a press conference at a Qantas hangar at Sydney Airport, he was confident that it was “very possible and very achievable” Australia would be accepting international visitors, starting with those from Singapore and New Zealand, by the end of the year.

Fully vaccinated Australians are allowed to leave the country from Monday and many people are jetting off to visit their partners abroad. However, it will be a longer wait before couples who have been forcibly separated by the border closure can resume ordinary life together in Australia.

Partners who hold a partner visa are automatically allowed to enter Australia as the immediate family of an Australian citizen or permanent resident. But partners without that visa – which costs nearly $8000 and takes almost two years to process – have to apply for an exemption.

Applicants for an exemption must prove they are in a genuine relationship by presenting evidence such as shared finances, merged social life and a history of living together. Many people in genuine but less established relationships have been knocked back, often multiple times.

The Australian Border Force has confirmed there are no planned changes to eligibility requirements for partner exemptions.

Danielle Edwards from Brisbane has been apart from her US partner Darren Kacmar since early 2020.

The couple have a registered relationship, shared finances and a shared lease. They were about to move in together when the borders closed and Mr Kacmar, a COVID-19 scientist, was stuck in the US. The couple used an immigration lawyer to apply for exemptions and were rejected three times.

“It’s been incredibly difficult to have no support, when you have this person who could be here to support you. Going into Thanksgiving and Christmas is really hard.”

The fact that the couple are in a registered relationship is recognised for tax and Centrelink purposes, causing further financial strain.

It’s similar for Chris Coillet in Melbourne, except that he lived with his partner Sam, a British ICU nurse, for four years. They have applied five times and Mr Coillet speculates they have been rejected because they lived together in London not Australia.

“It’s been a massive struggle,” Mr Coillet said. “The hardest thing is not having an understanding of when it’s coming to an end.”

Natalia in Sydney, who requested a pseudonym, has a prospective marriage visa for her partner in South Africa.

The rules changed in August to give people on prospective marriage visas a specific exemption category so they don’t have to prove their relationships.

However, this is only available for people once they have held the visa for 12 months. Natalia’s partner, who is South African, received the visa in August.

“We thought it was an absolute blessing but can see we have been royally screwed,” Natalia said.

“Not only is my fiance of now two years not considered immediate family, but we can’t even marry outside Australia [because of the visa].”

He could apply for a skilled migrant visa, being a qualified chef, but it would cost them thousands of dollars more after they have already spent nearly $8000 on the prospective marriage visa.

Get a daily update on the climate summit that will shape our future. Sign up to our Clear Air newsletter here.