Khan confirmed this week he was seeking preselection for the Liberal Party in the outer-western Melbourne seat of Tarneit, raising the ire of branch members in Guy’s eastern-suburbs Bulleen electorate.

Khan, a former Wyndham councillor and aspiring Labor politician, was convicted and fined in 2018 for breaching local government disclosure laws. 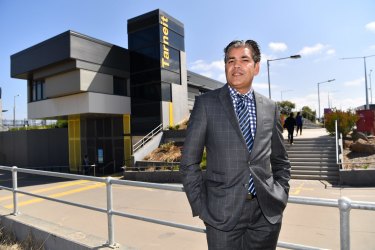 The businessman, known as the “King of Bling” due to his lavish property portfolio and love of supercars, tried to stand for Labor in Tarneit four years ago. Labor currently holds the electorate on a notional margin of about 17.7 per cent.

His potential candidacy has been criticised by several senior Liberal party figures over concerns Khan had bypassed local members and joined Guy’s branch, 45 kilometres from his home, because he did not have enough support in Melbourne’s west, where he would prefer to run. 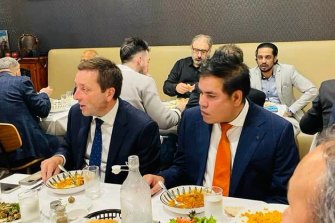 Several Liberal sources, speaking to The Sunday Age on the condition of anonymity as they were not authorised to speak publicly on internal party matters, said while Khan was not breaking any rules, the decision to approve his membership in a branch on the opposite side of the city was similar to a party practice known as “warehousing”, where new members join one electorate but transfer to another branch within months, bypassing grassroots members.

“It’s incredible his membership application was approved given he wants to run in the west.” 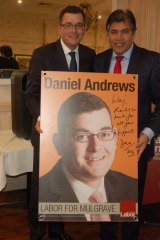 Khan with Premier Daniel Andrews during his time as a Labor councillor in Melbourne’s west.

After that qualifying period, there are no rules preventing members from transferring to the state electorate conference where they live, without approval from local members.

“It's incredible his membership application was approved given he wants to run in the west,” one Liberal Party official said.

Three senior Liberal sources said Khan had previously approached local party members in Melbourne’s west seeking to join a local branch but failed to receive any support, forcing him to sign up in Bulleen.

Khan denied the accusation, saying he only joined a branch in Bulleen to learn from “the best”.

“It is a great opportunity to learn from an established team,” Khan said.

“We only have one hope, and that’s Matthew [Guy]. I think he will be the next premier.”

Guy was contacted for comment, but a spokeswoman said Khan’s preselection nomination was a matter for the party, not the opposition leader.

In April, Guy attended a multicultural dinner with Khan, where he described him as a “good friend” and said he would like to see him represent “the area he lives in”.

Khan said he became disengaged with the Labor Party around the 2018 state election but only submitted his Liberal Party membership earlier this year. 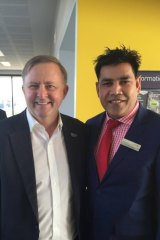 Khan said he became disengaged with the Labor Party around 2018 and switched to the Liberal Party this year.

He said the Andrews government’s strict lockdown policy and lack of support for small businesses struggling during the pandemic had prompted him to switch parties.

Despite joining a branch far from his home, Khan said he wanted to run for a seat in his own community.

He cited Labor’s failure in parachuting candidate Kristina Keneally into a previously safe Labor seat in Sydney as an example of why the Labor Party was losing support in multicultural communities.

“The parachute culture, people don’t like it,” he said.

“I am glad the seat [of Tarneit] is being contested. Local people should be given opportunities.”

Preselection nominations for the seat of Tarneit closed on June 6.

In 2018, Khan was convicted on eight charges, six of which related to his failure to properly disclose vast property and commercial interests in Melbourne’s west during his stint on Wyndham Council. He was fined $23,000.

Khan told The Age the failure was an “administrative error” and he had “moved on”.