‘F*** you fascist’: Foul-mouthed female anti-Trump protester spits in a police officer’s face and is tackled to the ground in New York

An anti-Trump protester was filmed spitting in the face of a police officer before being tackled to the ground in New York.

The woman, who was later identified as Devina Singh, can be seen yelling profanities in the police officer’s face while failing to social distance or wear a mask. 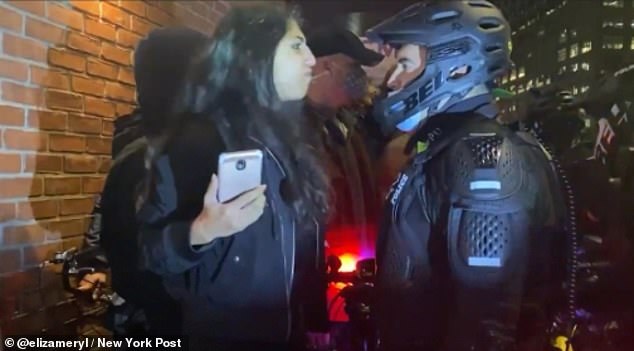 The woman, who was later identified as Devina Singh, can be seen yelling profanities in the police officer’s face 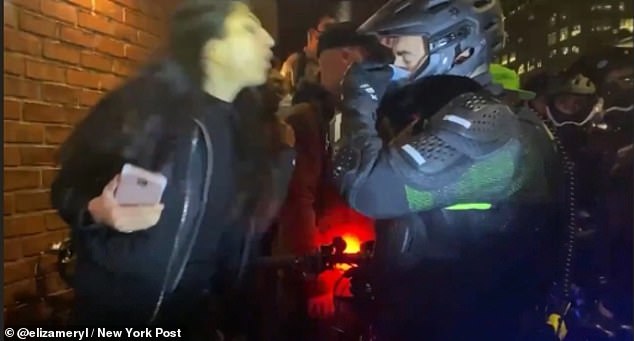 ‘F**k you, fascist!’ the 24-year-old can be heard shouting at the officer

Singh proceeds to spit in the officer’s face.

The episode, which was caught on camera, shows the police officer then grabbing the woman and shoving her against the wall before forcefully tackling her to the ground, prompting outrage from other protesters.

‘You don’t attack a woman!’ one person shouted.

Police later responded to the incident in a statement on Twitter saying: ‘Actions like this will not be tolerated. Agitators who commit these acts will be arrested.’ 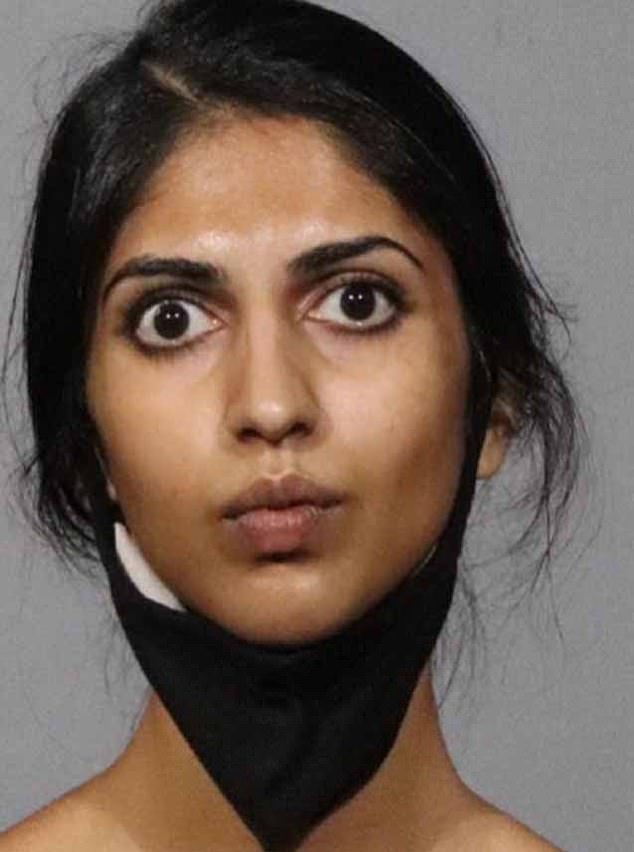 Devina Singh, pictured, was arrested on Wednesday night after spitting in a police officer’s face 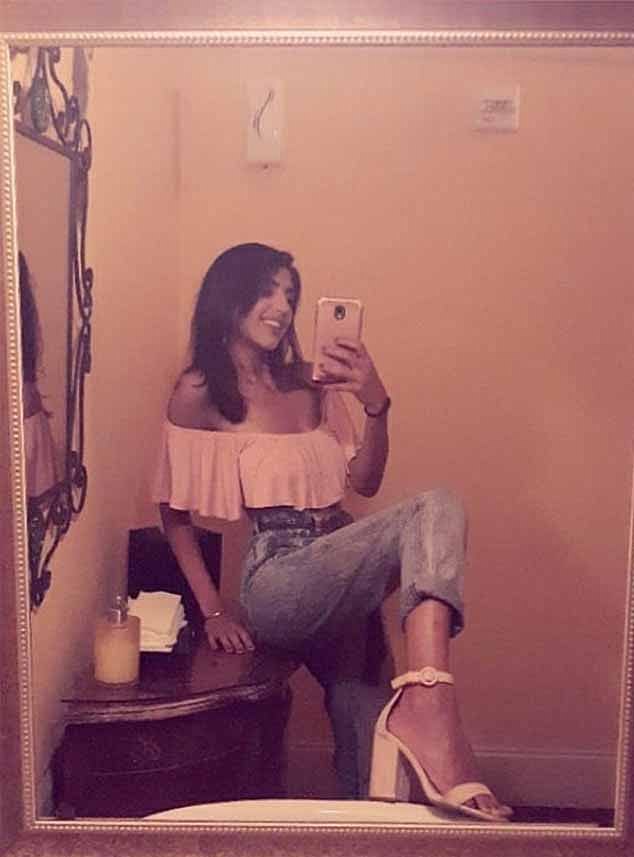 Police later responded to the incident in a statement on Twitter saying: ‘Actions like this will not be tolerated. Agitators who commit these acts will be arrested.’ Singh pictured above

Protesters on Wednesday kicked off a day of demonstrations in New York by marching down Manhattan’s iconic thoroughfare while chanting ‘count every vote’ and ‘every vote counts’.

Other groups also convened for rallies in Washington Square Park in Greenwich Village where police officers in riot gear were out in force.

‘It’s very important that we make sure that our democracy is maintained,’ said Meira Harris, 26, a social work student. ‘This election has provoked so much anxiety.’

The peaceful protests however took a violent turn by nightfall, after rallying cries in support of democracy devolved into anti-police rhetoric and members of other groups began setting fires on the streets.

In the West Village, officers clashed with activists as they moved on crowds during a rally on Leroy Street and Seventh Avenue. 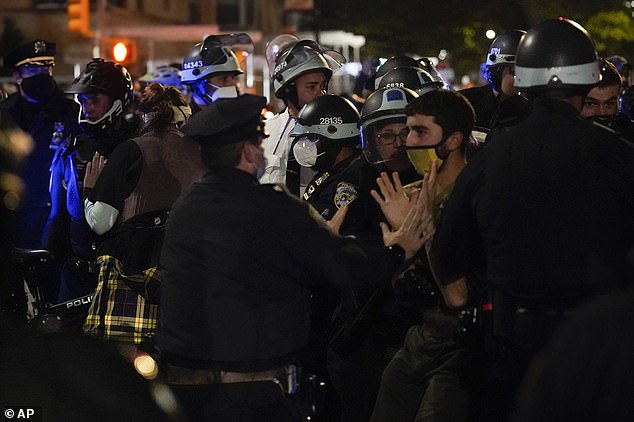 Peaceful protests had descended into chaos by nightfall, when police began moving on crowds and carrying out several arrests 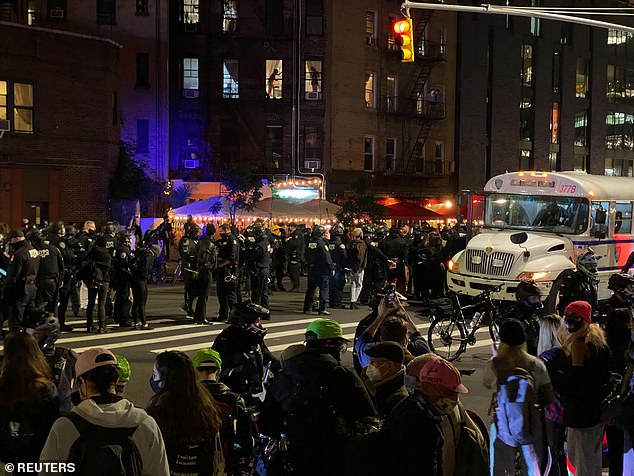 The Protect the Results coalition, encompassing dozens of groups from Planned Parenthood to Republicans for the Rule of Law, had said it was organizing a day of mass protests in 500 cities.

But those plans were put on hold late in the day.

More than 50 people were arrested in Wednesday night’s protests, where authorities also recovered several weapons including knives, a stun gun, and M80 explosives, the NYPD said.

‘We appreciate and value the importance of freedom of speech. Our top priority is and always will be safety. We have arrested more than 20 individuals who attempted to hijack a peaceful protest by lighting fires, throwing garbage and eggs in Manhattan,’ the department said in a statement.

Authorities did not specify whether the fires had been lit by protesters and not all participants involved in Wednesday’s rallies were part of the Protect the Results coalition.

A second group from the ‘Everybody Out’ movement were among those who gathered at Washington Square Park amid the chaos on Wednesday.

According to social media posts, the organization had planned a protest against either administration and vowed to rally every week until inauguration day.

‘No matter what goes down on Election Day, we will gather this Wednesday and every Weds until January 20 until the fall of the regime,’ the group’s event flyer read.

One participant also said cops had been just as rough with some peaceful protesters adding that he was hit in the head with a baton during a confrontation that broke out on Fifth Avenue and Eighth Street.

‘This is the first time the cops have been as aggressive as they were,’ Charles Michie, 23, told the Wall Street Journal. ‘Several times tonight they just started to swarm and started to use violent force.’ 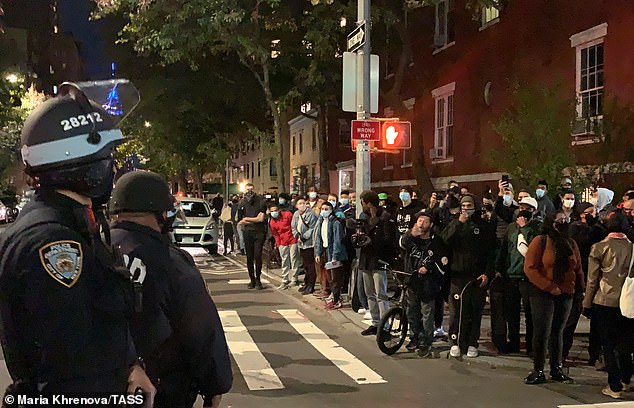 Demonstrations were also seen in a few other U.S. cities on Wednesday night as activists demanding that vote counts proceed unimpeded rallied in several cities, including Portland, Atlanta, Detroit, and Oakland.

Earlier on Wednesday, about 100 people gathered for an interfaith event before a planned march through downtown Detroit, in the battleground state of Michigan, to demand a full vote count and what they called a peaceful transition of power.

The post-election mayhem extended to west coast in Seattle and Portland which has already been roiled by five months of near-nightly racial injustice protests since the police killing of George Floyd.

On Wednesday, the Multnomah County Sheriff’s Office declared a riot around 7pm after protesters were seen smashing windows at businesses during a demonstration against Trump’s court challenges to stop the vote count in battleground states.

‘All of the gatherings that were declared riots were downtown. We have made 10 arrests’, a Portland Police spokesman told Reuters in an emailed statement.

In Los Angeles, the LAPD declared an unlawful assembly during a protest on Wednesday in the area of 5th and Hill Street.