Home » World News » From the Archives, 1956: Melbourne lights up for the Olympic Games

Crowds Watch City Lights Flash On for the Games

Melbourne’s brilliant Olympic lighting, officially switched on last night for the first time, was seen by thousands of people who thronged the footpath outside the Town Hall. 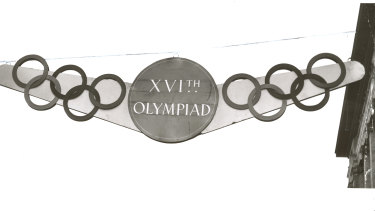 Olympic emblems on display in Swanston St in preparation for the Games.Credit:Roy Gulliver

The 75-ft. high Olympic torch at the corner of Swanston and Flinders streets made a lively spectacle that bough gasps from the crowd when the gas flame burst forth 20 seconds after the Premier (Mr Bolte) had turned on the city’s carnival lights.

From the portico of the flag-decked Town Hall the Lord Mayor (Sir Frank Selleck) called for three cheers for the Olympic city and the crowd loudly responded.

“This is a great day for all of us. The Olympic Games are here,” he told them.

Traffic was not halted in the central city area while the brief official ceremony took place, but squads of police lining Swanston Street and the major intersections kept the crowds on the footpath to ensure free access for motor and tram traffic.

Footpaths in Swanston Street were jammed for half-an-hour before the lights were turned on at 8.30 pm. 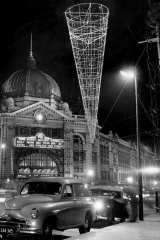 The Olympic torch erected over the intersection of Swanston and Flinders streets.Credit:K. Brown

Immediately after the decorations were illuminated, eyes turned towards Flinders Street where the Olympic torch glistened in the floodlights.

Although affected by a strong wind the flaming torch was a brilliant spectacle that kept crowds outside St. Paul’s Cathedral staring upwards for hours.

Sir Frank Selleck said: “In no field of endeavor has cooperation been greater than in the planning, design and erection of our Olympic decorations.

“My thanks go to those city firms who have responded to my personal appeal to paint and decorate buildings and to municipalities which have erected decorations.”

The Premier (Mr Bolte) said excitement was mounting in the city. It was up to the people of Melbourne to make Olympic visitors feel at home.

“We want Melbourne to be bright,” Mr Bolte added. “The Olympic Games are not given to a country or to a State, but to a city.”

Motor traffic through Melbourne was heavy from 8 pm until 11.30 pm, but police kept the city open.

The pace was more leisurely as thousands drove around main decoration points. Police courtesy squads cruised among the cars.

Traffic jams were frequent. Police had all control points manned.

The traffic problem was accentuated when home going theatre crowds joined the sightseers and congestion was heavy until almost midnight.