A hostess overpowered a gunman to end a hijack attempt at Brisbane Airport last night.

The drama began about 8.30 when the man, about 40, pointed a shotgun at pilots on a TAA flight from Melbourne to Brisbane. 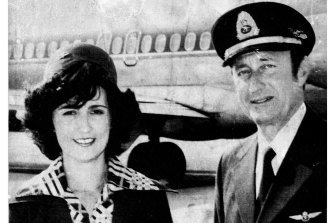 It ended more than two hours later when the hostess made her move. Other crew helped pin the man to the floor of the DC-9’s cockpit.

Police who had the plane surrounded rushed in to grab the man. He was being questioned early today.

A passenger, Mr Tony Grech, 19, an apprentice mechanical fitter with TAA at Essendon airport said the plane was between Coolangatta and Brisbane when the drama began.

Mr. Grech said he was sitting in a first class seat just behind the cockpit.

He said: “A hostess asked me if I worked for TAA and I said ‘yes’.

“She said ‘I think there is a hijacker on board’. She asked if I would sit next to her because she was nervous.”

He said he heard something hit the door. “It was half unlocked.

“I knew something was very wrong then.

“We circled Brisbane, then landed and the pilot hit the brakes awfully hard.

“He pulled us up really quick.

“Then the hijacker told the hostess to go up front and told the other three hostesses to sit in the seats beside the galley.

“He said he wanted three cups of coffee. He was shaking the gun at the pilot and hostesses. He was holding one of the hostesses by the shirt.

“Then he told them to get the people off and apologised to two little kids.

“The captain said ‘I can go down and do that’.

“The hijacker told him that if he did he would blow his head off.

“I would not try to get the gun off him. He would shoot you for sure.

“I have no idea what he wanted and I don’t think anyone else does,” Mr. Grech said.

The man is believed to have boarded the aircraft when it stopped at Coolangatta on the Melbourne-Brisbane flight.

At 8.50 pm Brisbane flight control received a signal from the aircraft indicating an emergency on board.

Air traffic controllers alerted police soon after the jet landed at 8.52 pm when they saw a man in the cockpit menacing the pilots.

Sixty State and Commonwealth police, including a State anti-hijack squad, surrounded the plane which the hijacker demanded be parked at the north-eastern end of the main runway.

The man then negotiated with a TAA official and told him he wanted the plane refuelled and prepared for a three-hour flight.

He also told the official he wanted his wife and children brought to the airport and demanded to speak to television personality, Mike Willesee.