New York: The head of a fund providing restitution to victims of Jeffrey Epstein’s sexual abuses says she has finished the claims process, and awarded nearly $US125 million ($170 million) to about 150 eligible claimants.

In a statement, the Epstein Victims’ Compensation Fund said 92 per cent of eligible claimants accepted their compensation offers, and have received more than $US121 million. 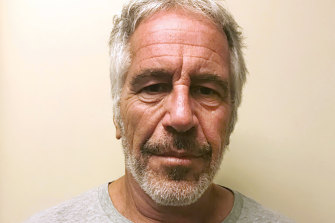 August 10 is the second anniversary of Jeffrey Epstein’s death.Credit:AP

The fund received about 225 claims, more than double the 100 it expected. It turned away about 75 claimants, though they can still pursue claims against Epstein’s estate.

Jordana Feldman, the fund’s administrator, said in a statement on Monday US time that “every claimant had an opportunity to be heard in a safe space, to share the intimate, personal, often harrowing accounts of what they endured and how it has affected them”.

Feldman announced the payouts one day before the second anniversary of Epstein’s death.

The financier killed himself at age 66 in a Manhattan jail cell on August 10, 2019 while awaiting trial on sex trafficking charges. He had signed his will two days earlier.

Some payouts were delayed by litigation between the executors of Epstein’s estate, which once held $US634 million, and Attorney General Denise George of the US Virgin Islands, where Epstein owned two islands.

George accused the executors of depleting estate assets too quickly, and also being the “indispensable captains” of Epstein’s sex trafficking.

The executors have denied any misconduct.

George and a lawyer for the executors did not immediately respond to requests for comment.

The fund opened in June 2020, following negotiations between lawyers for the executors and victims as well as George.

Feldman also helped lead the compensation fund for victims of the September 11, 2001 attacks. She was not immediately available for additional comment.

Ghislaine Maxwell, Epstein’s longtime associate, has pleaded not guilty to charges she groomed and trafficked underage girls for Epstein. Her trial in Manhattan could begin in November.

If you or anyone you know needs support call Lifeline on 131 114.