A rocket-propelled grenade has been fired at a Ukrainian television station’s building after it said it would air a documentary featuring Vladimir Putin.

Authorities were investigating an attack on the Kiev network – owned by an opposition election candidate – which caused damage but did not injure anyone.

An unknown assailant shot the missile at the 112 TV channel building in western Kiev at 3.40am local time, police said in a statement. 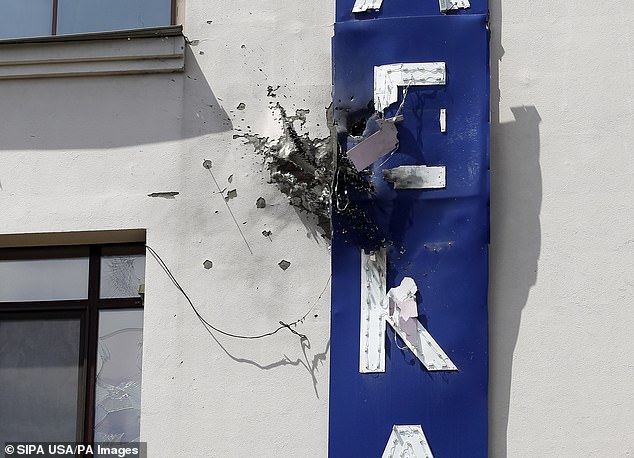 An unknown assailant shot the missile at the 112 TV channel building (pictured) in western Kiev at 3.40am local time, police said in a statement

The incident was being investigated as ‘an act of terrorism’, it said, adding ‘policemen are looking for the attacker’.

Tensions between Russian and Ukraine have remained high since Moscow claimed to have annexed Crimea in 2014 in a referendum.

The move came after President Vikor Yanukovych, a close ally of Moscow, was ousted amid protests. 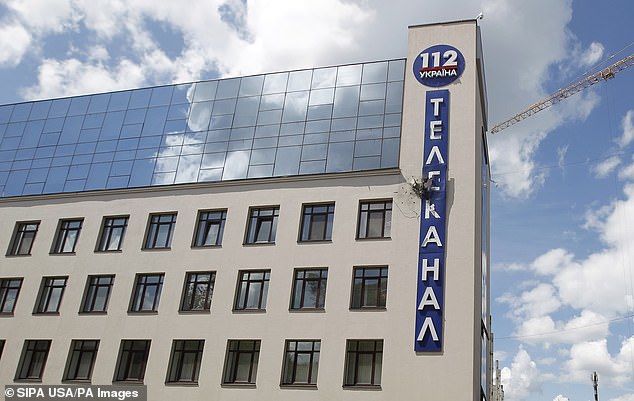 The incident was being investigated as ‘an act of terrorism’, it said, adding ‘policemen are looking for the attacker’

But it is not recognised by the UN which considers Russia’s presence in Ukraine to be an occupation.

Hostilities between Russia-backed separatists and Ukrainian government troops in eastern Ukraine have killed more than 13,000 people since 2014.

It is this part of the country that is more prone to violence, so the attack in the central city of Kiev comes somewhat as a surprise.

112 TV aired footage of the damaged front building banner, a broken window and crumbling plaster inside. 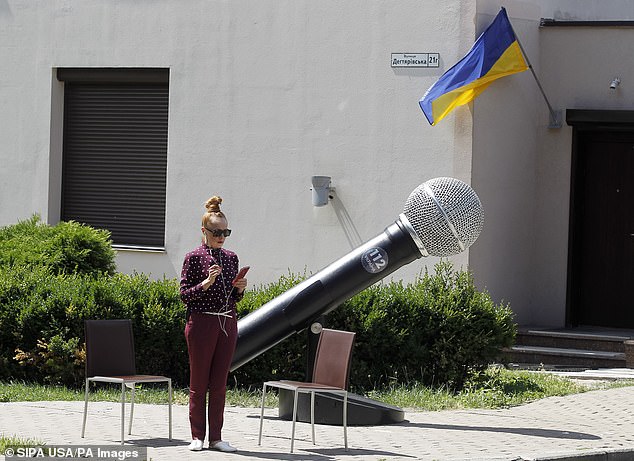 112 TV aired footage of the damaged front building banner, a broken window and crumbling plaster inside. Pictured: A 112 journalist stands outside the front of the building

Stone had already interviewed Putin twelve times for a documentary titled The Putin Interviews which was aired in 2017.

From the interviews the American filmmaker said he was able to see ‘from the other side’ what the West was preparing. 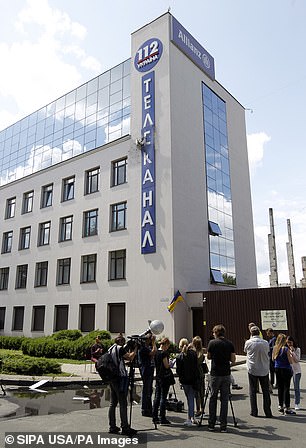 Yanukovich, who oppose Ukraine’s integration with the West, often appears as a speaker on 112 TV.

He fled to Russia in 2014 following street protests against his rule.

Taras Kozak, a member of the Russia-friendly Opposition Platform party, owns a 99 per cent stake in the TV station.

Kozak is registered as a candidate in Ukraine’s July 21 parliamentary election.

Managers at the TV channel said earlier its journalists had previously received threats via social media from Ukrainian nationalists.

Kozak branded the attack a ‘threat to independent media’, and blamed ‘inaction’ by authorities.

The Opposition Platform party, of which one of its leaders Viktor Medvedchuk is a frequent 112 TV guest speaker, accused Ukrainian President Volodymyr Zelenskiy on Saturday of encouraging radical nationalists to confront several TV stations, including 112.

Medvedchuk has ties to Putin and was sanctioned by the US in 2014.

Zelenskiy did not immediately respond to the accusations.

His Servant of the People party is the most popular political movement in the country, according to a recent opinion poll.

The Opposition Platform was in second place.